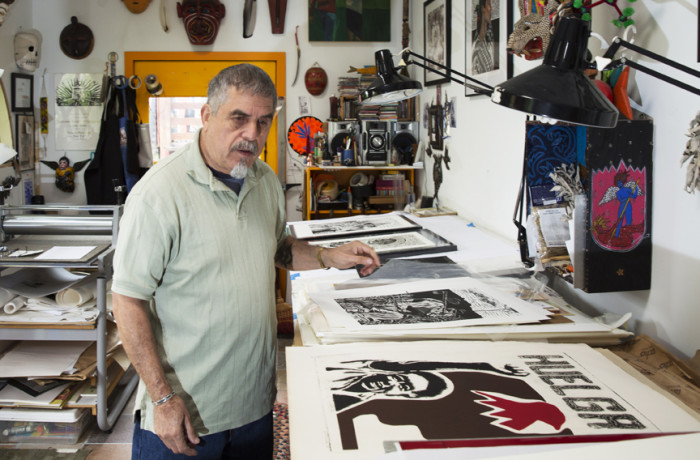 Juan Fuentes at his home studio, next to his poster “Huelga.” Originally done as a collagraph, it was his first piece to depict the struggle of farmworkers. Photo Drago Rentería 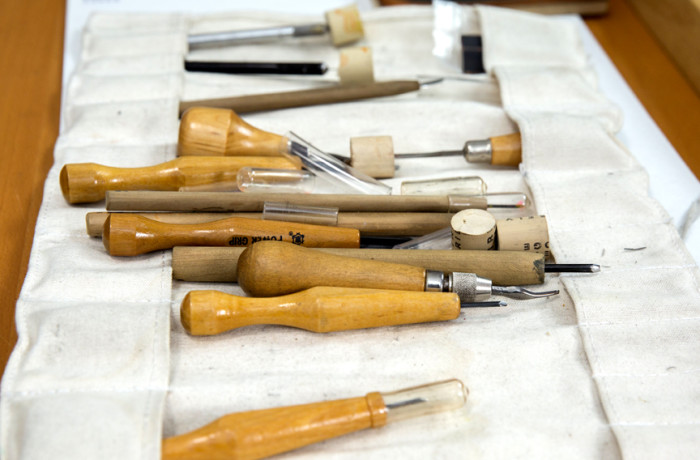 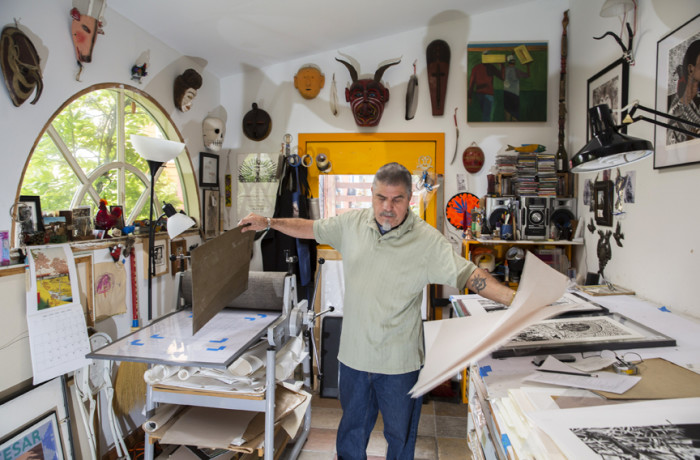 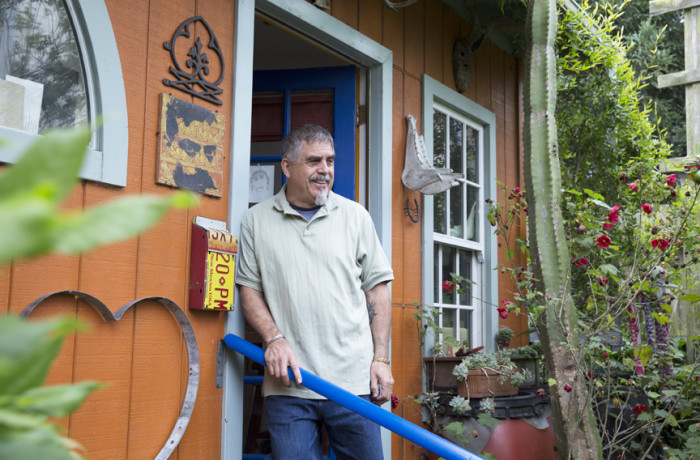 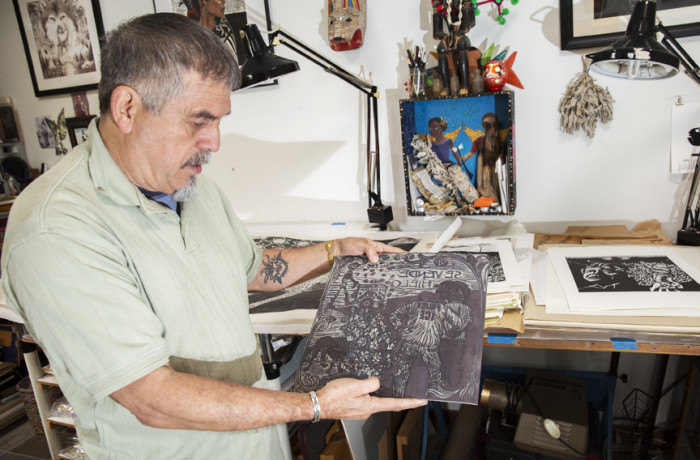 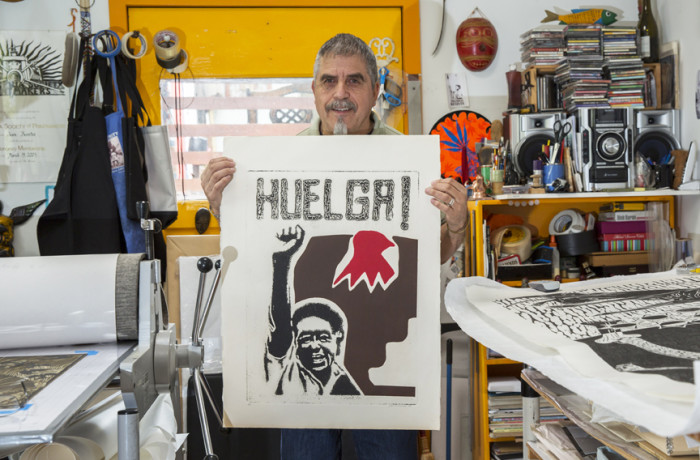 Juan Fuentes at his home studio, holding his poster “Huelga.” It was his first piece to depict the struggle of farmworkers. Photo Drago Rentería 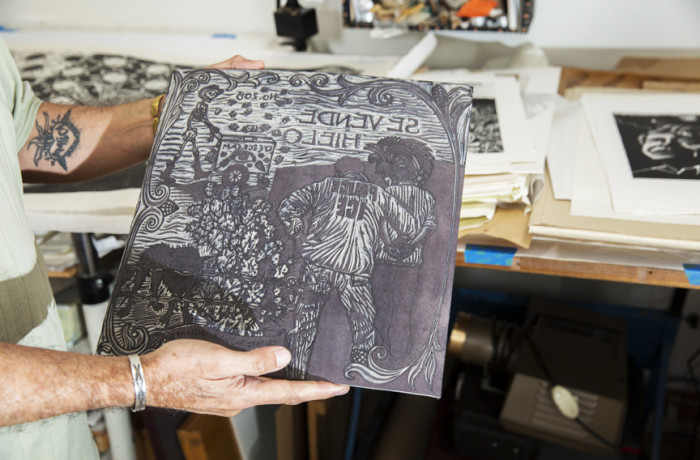 San Francisco-based printmaker Juan Fuentes, whose body of work spans more than four decades, will have a solo exhibition depicting the struggle of farm workers beginning later this month.

“Visual Tribute: A Dialogue with Cesar,” which opens on April 23, will coincide with the annual Cesar Chavez Parade and Festival.

Much of Fuentes’ work is thematically tied to the United Farm Workers movement. He grew up in a family of farm workers who settled in the Salinas Valley, and as a young boy often worked in the fields.

“It’s really been a subject I keep addressing and doing in my work,” Fuentes said. “I’ve never exhibited a body of work specifically identified with the farm workers struggle. It’s an honor to be invited to do an exhibit on the subject.”

“Everyone thinks it’s great to honor Juan for all the work he’s done in the community,” said Georgiana Hernandez, Acción Latina’s executive director. “He’s spent a lot of time thinking and reflecting on the farmworker movement, and his prints will bring an interesting perspective.”

Fuentes began his career as a printmaker after graduating with a degree in painting and drawing from San Francisco State University in 1975. His interest in printmaking grew during his studies.

“I had taken a class with Rupert Garcia,” Fuentes said. “He was my first Latino professor in the art department there. I built a relationship with Rupert. We became good friends, and he was the one who introduced me to printmaking.”

Fuentes’ subject matter, which he describes on his website as “dedicated to supporting and being part of a global movement for social change,” also took shape in the 1970s.

“I went on a solidarity trip to Cuba in 1973-74 with one of the Venceremos Brigades. While there I was influenced by the graphics, images and posters being produced, especially those by Rene Mederos,” Fuentes said. “The colorful, flat style Mederos worked in resonated with me. All the artists I saw there were doing some really dynamic work, and the pieces always had something to do with the everyday Cubans’ struggle.”

After graduation, Fuentes began working as a printmaker at FITS printing on Valencia Street. He also became involved as a volunteer for El Tecolote newspaper and did work as a poster maker for Acción Latina’s Encuentro del Canto Popular, an annual celebration that promotes Latin American music with a social justice message.

Over the next few decades, Fuentes used his artistic skills to give back to the Mission community as an artist and teacher. His posters and prints from this period were often in solidarity with such struggles as the Chicano movement and the fight for equality for the African American, Middle Eastern, Asian and Native American peoples.

In 1997, while working as an art teacher at the San Francisco County Jail’s Arts Program, Fuentes began working in relief printing, a style of printmaking where a plate or block is carved and protruding surfaces are then inked to produce a print. Up to that point, most of Fuentes’ work had been silkscreen prints. The prints exhibited in the show are done in both mediums.

“Juan’s an incredible printmaker who does beautiful prints,” said Malaquias Montoya, a fellow printmaker and friend of Fuentes. “He gives back to our community through his art because the community members have always been the ones who inspire him. He’s remained steadfast in this commitment, and he’s not only gained my respect but the respect of a lot of other artists as well.”

Since 2007, Fuentes has worked out of his studio, Pajaro Editions, in the Bayview district. He’s also a founding member of the Bayview’s  94214 Gallery and serves as a mentor to many emerging Bay Area artists.

Visual Tribute: A Dialogue with Cesar’s opening reception is April 23 at 5 p.m. The gallery is located in Acción Latina’s headquarters at 2958 24th Street and is open Tuesday – Saturday, 11 a.m. to 5 p.m.

Join the Facebook event page for more information about the opening reception.

A farm-working mother’s triumph over COVID-19