So long Ted: Goodbye to our friend and legendary street photographer Ted Pushinsky

Protesters walk to the front of the ICE building at a rally against planned immigration raids at the ICE headquarters in downtown San Francisco Thursday, January 25, 2018. Photo: Aaron Levy-Wolins 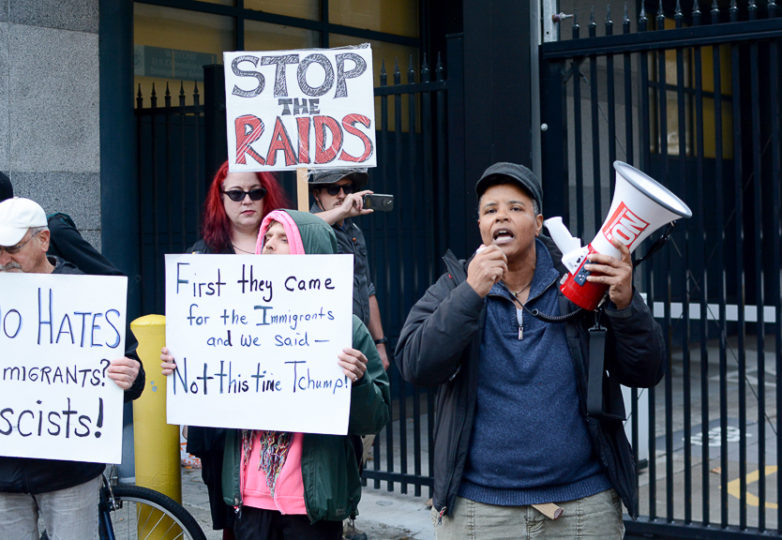 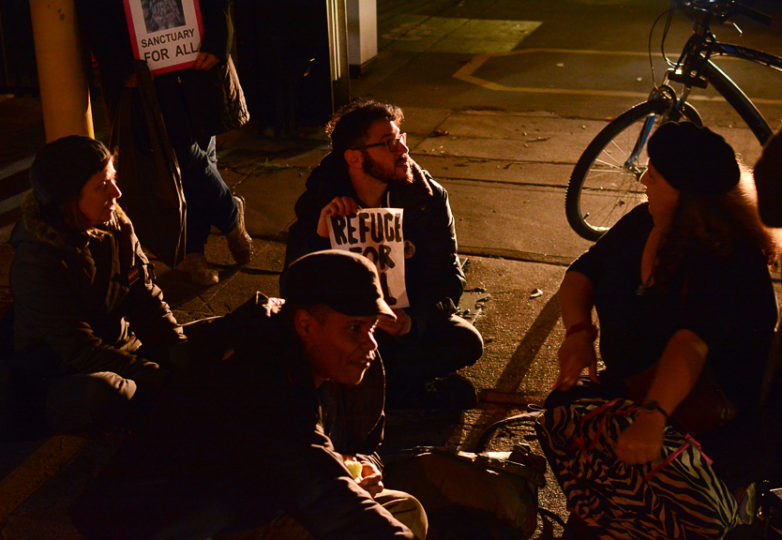 Nearly 100 people rallied outside of the US Immigration & Customs Enforcement field office in downtown San Francisco on Jan. 25 in protest of planned ICE raids taking place throughout Northern California.

Protesters yelled and held signs as they blocked the exit gate to a parking lot at 630 Sansome street for ICE vehicles.

People shouted slogans such as “Immigrants stay, Trump and Pence must go,” and “No ban, no wall, sanctuary for all.”

“For over ten years, there’s record deportations; pretty much every minute you can count during the day there’s deportations happening,” said David Ramos. “So I came out here to show that even though I’m a citizen and this does not affect me, doesn’t mean that this is not important.”

Ramos brought his three-year-old son, Alex, who held a sign that protested the federal administration. Ramos believed that it was important to bring his child. “It’s important that he understands that if people don’t go to the streets and put their foot down and say ‘No,’ when something terrible is happening, you don’t have something that is worth being called a society.”

He demonstrated along with Refuse Fascism, a group formed directly after the 2016 presidential elections that pushes for the removal of President Donald Trump and his administration.

“We will build a movement to defend our immigrant brothers and sisters, to stop these raids, to stop these ICE [agents] from coming into our communities,” said Xochitl Johnson, 42, an organizer for Refuse Fascism Bay Area, during the rally. She said that it was essential for citizens to put their “bodies on the line to stop modern-day fascism.”

“We have community members being stolen from their homes and being forcibly deported,” she said. Andary also said that friends of friends as well as people throughout her community were being impacted by the ICE raids, particularly the Mission District. “It’s important to show up; it’s important to stand up; it’s important to use your voice when you can—especially use your voice for people who might now have the ability to have their voice be heard.  Showing up is the least I can do and is the least most people do.”

A few police vehicles, lights flashing, guarded against the protest but left after a few hours. An ICE vehicle approached the exit gate to leave but was blocked by Refuse Fascism protesters.

One group of protesters hummed the spiritual song ‘Down by the Riverside’ as they stood by the  Refuse Fascism organizers, who sat by the ICE gate. Immigration did not take any action against the demonstrators and the car eventually left through the entrance gate. The protest dispersed shortly afterwards.

“Stand up, stand up for your community members, stand up for when you see something wrong happening,” said. “Andary speak up and show up – not just today but whenever you’re asked.”