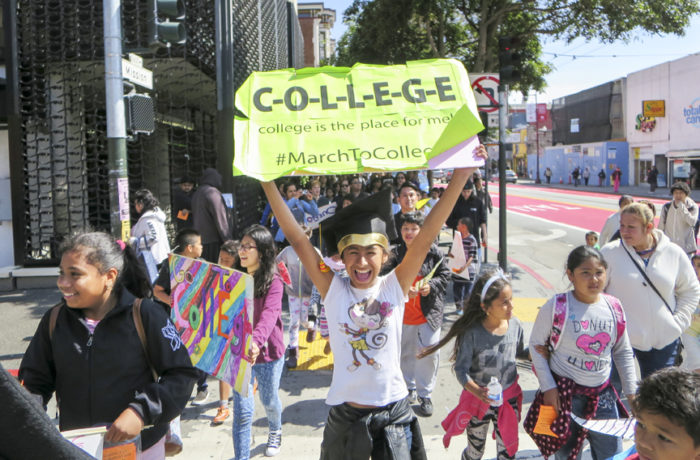 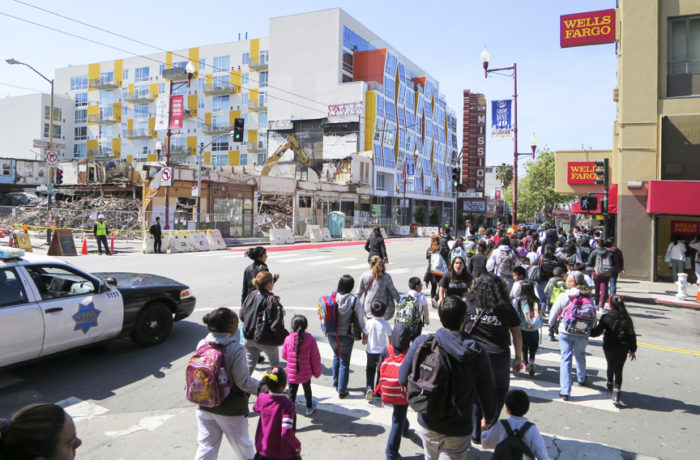 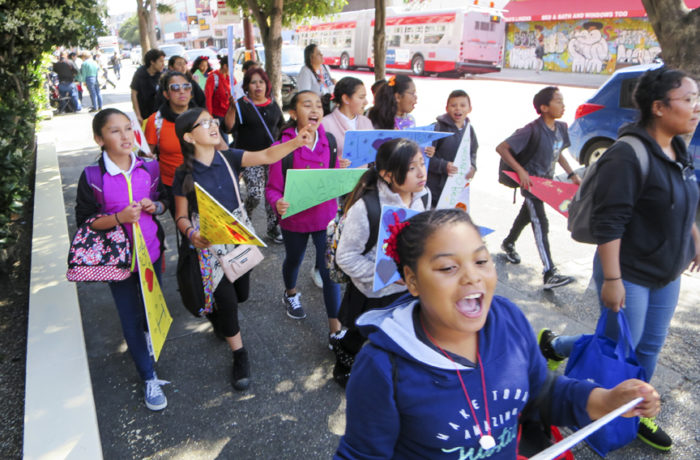 Children from schools in the Mission District were greeted with applause and honks from passersby on May 12 as they marched and chanted, “We want to go to college,” to raise awareness for college attendance among Mission youth.

“[The march] is to empower students for them to feel able to go to college,” said Brenda Montaño, a fifth grade class coordinator at Flynn Elementary.

The event was hosted by Mission Graduates, a local nonprofit organization that focuses on increasing the number of college graduates from the Mission District, according to Mission Graduates Community Engagement Manager Jenna Casey.

“We are doing after school and college access work in five different schools in the Mission,” Casey said. “We have about nine schools where parents are part of our leadership committee and advocacy workshops.”

Mission Graduates currently serves about 2,100 students and families each year, according to Casey.

For many, college information and resources are scarce.

“My mom really wanted to encourage me but she really didn’t know how to,” said Antonio Caceres, a CCSF student, Mission District native and former recess coordinator at Flynn Elementary. “I think that a lot of these parents haven’t gone to college and you have an advantage if you’ve gone to college. You can tell people where to sign up, what to look out for and I think that us as a community, we are filling in those gaps for some of these kids that don’t have parents that could do that for them.”

Caceres, who recently went back to school, hopes that students have a direct pathway from high school to college.

“I’m going to school, and I took an untraditional route to college,” Caceres said. “I realized there was only so far I could go.”

Parents and family members who supported the march see that there is a need for a direct pathway as well.

“I’m here to support the march and the school,” said Antonia Quintanilla, a grandmother of a Flynn student. “I want my grandson to have a better future.”

Quintanilla, who came from El Salvador because of political turmoil, said that she came to the Mission District in hopes that her children will have a better life.

However, in order to improve the number of Mission youth going to college, there needs to be a change in the school system, according to Caceres.

“I do feel that we need to put more pressure on our superintendents, on the supervisors, on the school board,” Caceres said.  “As the city is growing and becoming more expensive, we should see it directly affecting our schools becoming better, but unfortunately we don’t. Schools are in the same shape as they were 20 years ago when the rent was $2,000 cheaper.”

The Mission Graduates program aims to make college an expectation for the children of the Mission, rather than an option.

“It’s important to be able to understand that it takes a whole community to support a student, to support a family,” Casey said. “I think giving our youth a space to make a public demonstration and to declare to their own community that they are on the path to college and that college is something that they believe in for themselves is really powerful.”