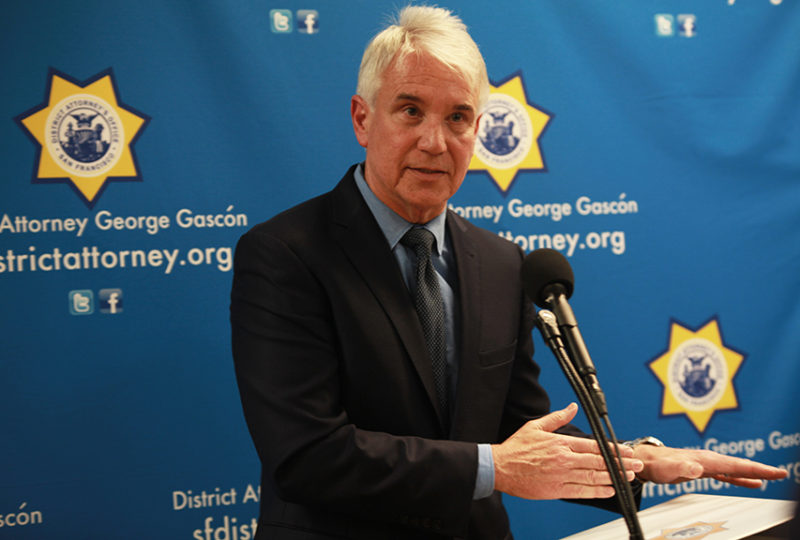 District Attorney George Gascón announced Wednesday, April 12 that he would not pursue criminal charges against the two SFPD officers involved in the 2015 fatal shooting of Amilcar Perez-Lopez. Photo: Cassie Ordonio 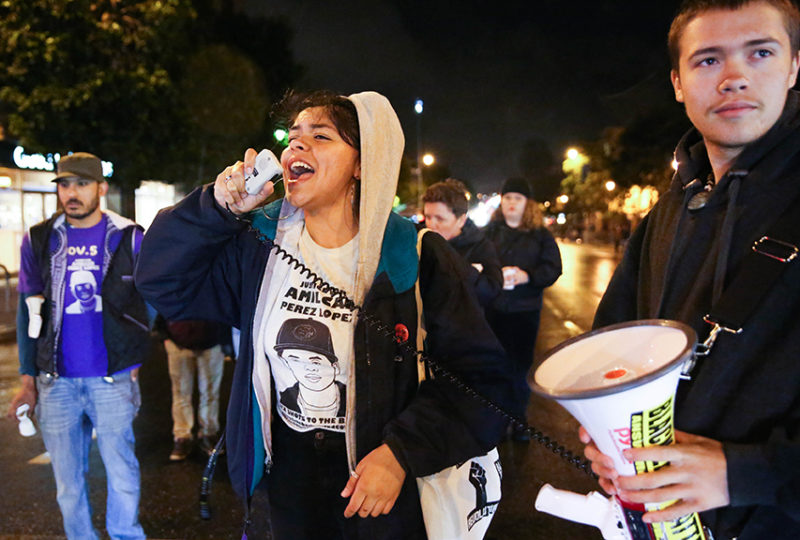 Angela Rey leads a small group of protesters in a chant at 17th and Valencia streets in front of the Mission Police Station on April 12, at a demonstration in response to the District Attorney’s office statement to not indict the officers involved in the fatal 2015 shooting of Amilcar Perez-Lopez. Photo: Emma Marie Chiang 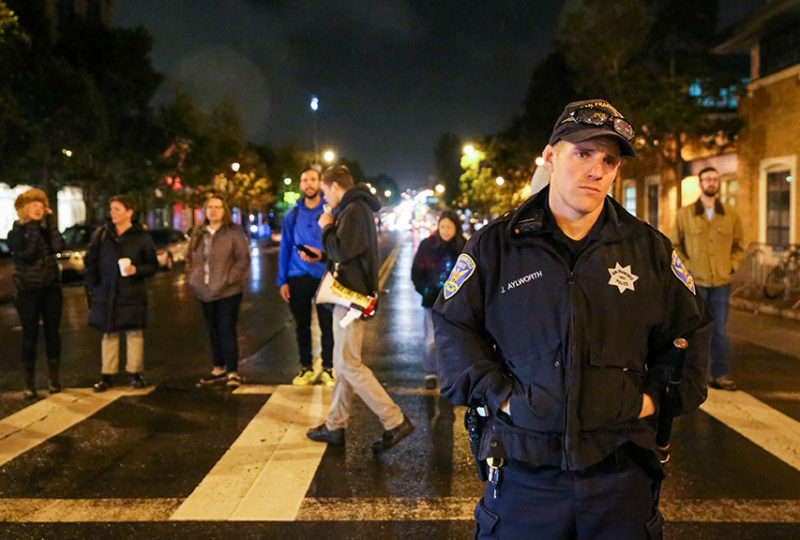 Officer J. Aylworth stands in front of a group of protesters block off 17th and Valencia streets in front of the Mission Police Station in response to the District Attorney’s office statement to not indict the officers involved in the fatal shooting of Amilicar Perez Lopez in February 2015 on Wednesday April 12, 2017. Photo by Emma Marie Chiang 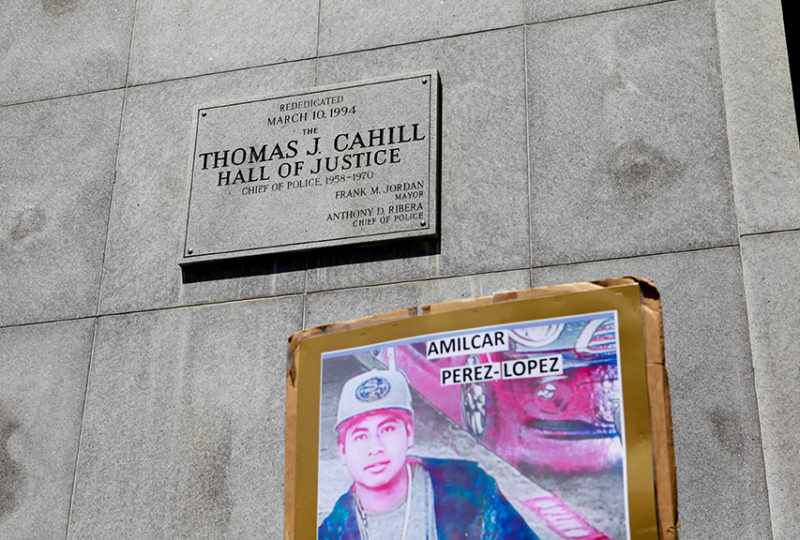 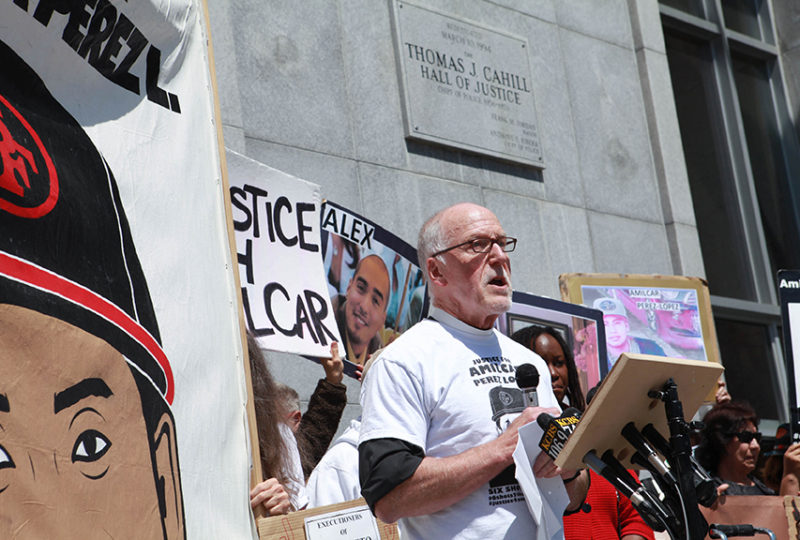 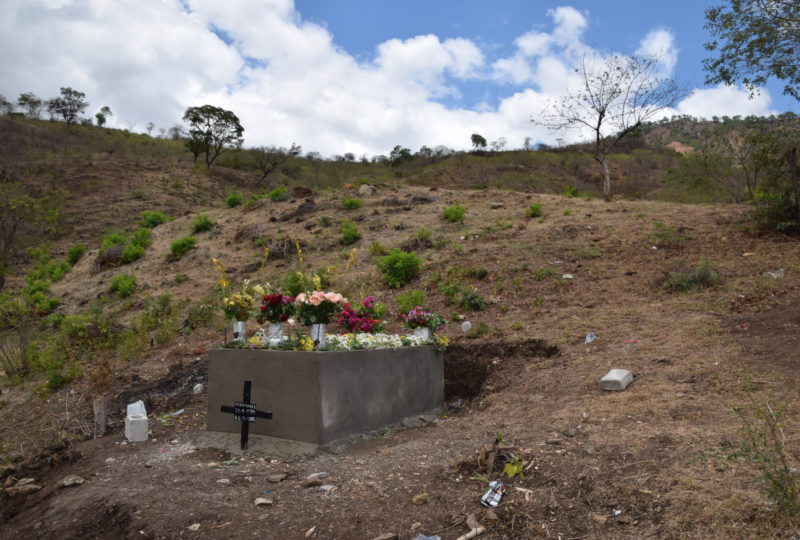 Amilcar’s burial site at his home town of San Jose la Arada, in the district of Chiquimula, Guatemala. Photo courtesy of the legal team for Perez-Lopez 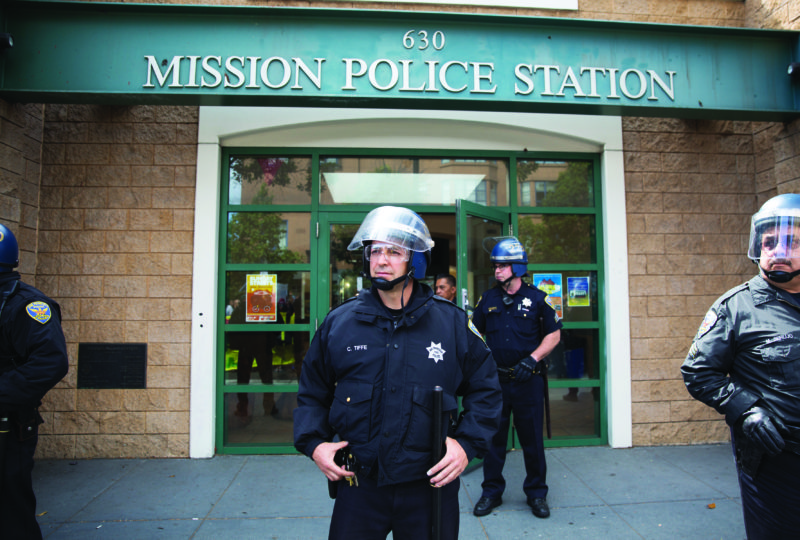 Officer Craig Tiffe, one of the SFPD officers who shot Amilcar Pérez-López from behind on February 2015. Photo Drago Rentería 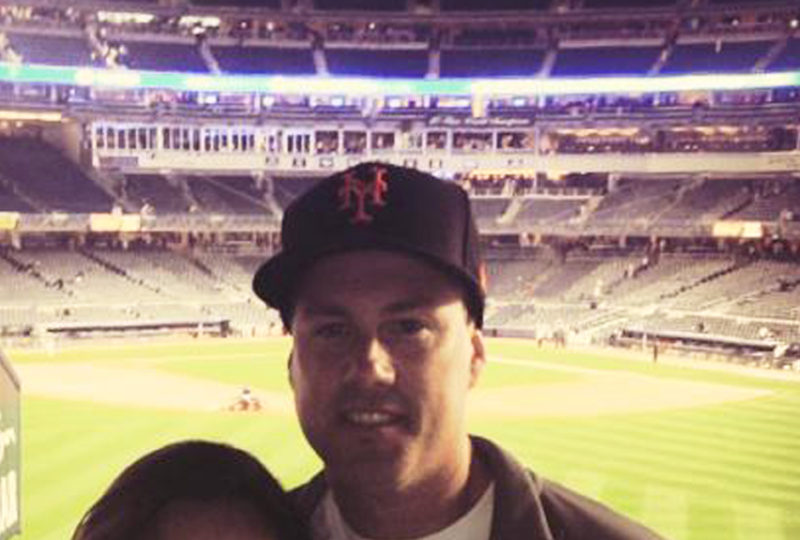 Eric Reboli, one of the SFPD officers who fatally shot Amilcar Perez-Lopez in the back in February 2015. Via: Facebook 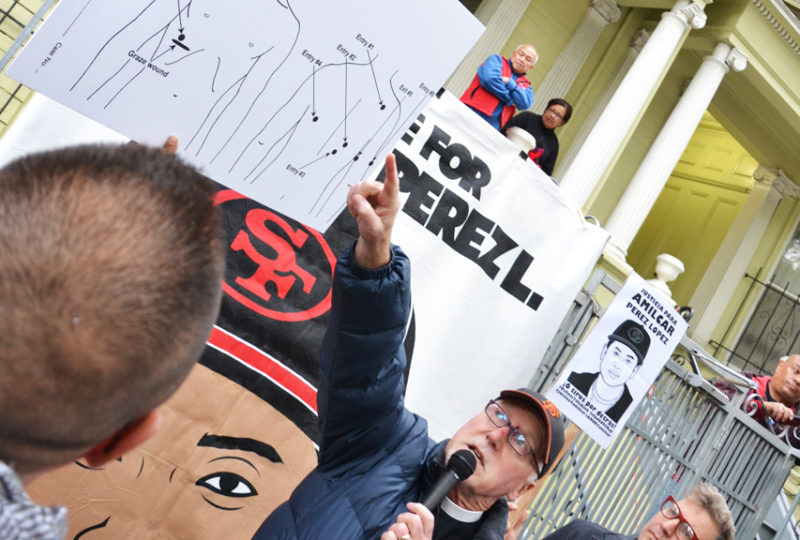 Father Richard Smith points at a diagram from Amilcar Pérez-López’s autopsy, outside the home where Amilcar lived at the time of his death, during a vigil on Friday April 24, 2015. Photo Mabel Jiménez 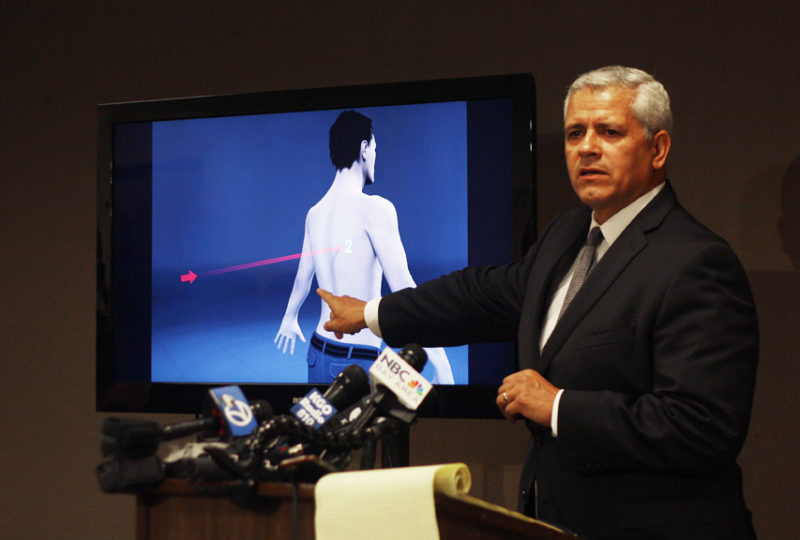 Attorney Arnoldo Casillas, who is representing Amilcar Pérez-López’s family, points to an image that illustrates that his client was shot in the back by police while running away, during a press conference on April 24, 2015. Photo Alexis Terrazas

A week after the District Attorney’s Office declined to charge the two SFPD officers who fatally shot Amilcar Perez-Lopez in 2015, community activists are rejecting the decision and disputing the evidence presented to justify it.

Ever since District Attorney George Gascón called for an independent investigation moments after Perez-Lopez’s death, the Perez-Lopez family, as well as coalitions representing other San Francisco residents killed by SFPD, has waited patiently for justice.

Gascón released his findings in a report on April 12, more than two years after Perez-Lopez’s death.

“Based on the facts, circumstances and applicable law in this matter, there is insufficient evidence to file any criminal charges against Officer [Eric] Reboli or Officer [Craig] Tiffe,” the 25-page investigative summary read.

“My job requires [me] to look at the evidence and the law and to make a decision based on that,” Gascón said at the press conference where he presented the report.

The night of the announcement, community members gathered for a demonstration outside the Mission Police Station to express their frustration and disbelief with Gascón’s decision.

Public anger in response to the number of SFPD shootings of Black and Latino men has mounted steadily over the past three years. The situation reached a breaking point in the spring of 2016 after a series of massive demonstrations calling for the resignation of then SFPD chief Greg Suhr.

“After carefully reading the report, we do not accept its conclusion,” said Father Richard Smith from the St. John the Evangelist Church, who is an advocate for the Justice 4 Amilcar Perez-Lopez coalition. “The DA has more than enough evidence to bring this case to trial. This raises more questions than answers.”

The night Perez-Lopez was killed

On Feb. 26, 2015, officers Eric Reboli and Craig Tiffe responded to a 911 call about a man with a knife. According to the DA’s report, Perez-Lopez, who had not been identified at that time, was chasing Abraham P. on Folsom Street between 24th and 25th streets.

Reboli and Tiffe were in plain clothes. They claim they identified themselves as police, but  because Perez-Lopez was a monolingual Spanish speaker, it isn’t clear that he could understand them.

But, as El Tecolote has previously reported, there were inconsistencies between the official version of events and the accounts of several eyewitnesses. Most notably, Suhr’s claim that Perez-Lopez lunged at officers with the knife contradicts the results of an independent autopsy, which showed four entry wounds in Perez-Lopez’s back (plus one to the back of his head, and another that grazed his lower back and entered his arm).

Arnoldo Casillas, the attorney representing the Perez-Lopez family, argued that the shots to the back indicate that not only was Perez-Lopez running away from the officers, but he had his arm at his side when the shooting occurred.

“He was shot in the back four times. If I’m charging you, you can’t shoot me in the back,” Casillas said in April of 2015, shortly after the independent autopsy report was made public. “It’s physically impossible to get these trajectories through his body unless he’s running away.”

Gascón explained his decision through a detailed PowerPoint presentation, which showed the placement of officers Reboli and Tiffe by providing photos and a digitally animated sequence showing the location of the officers, Perez-Lopez and Abraham P. on the night of the incident.

However, the photos and the animated video did not show exactly where the bullets struck Perez-Lopez.

Witnesses told police they saw two men running down Folsom Street, one of whom was holding a knife. The 911 call was made at 9:45 p.m.

Reboli and Tiffe, who were driving an unmarked police vehicle, were the first to respond. Both officers claim Perez-Lopez was making slashing movements toward them, and Reboli thought Tiffe had been stabbed.

“For officers to be charged we would have to prove that the officers did not act in self-defense or in the defense of others,” Gascon said.

A photo taken by an eyewitness showed Perez-Lopez laying on his stomach on the street after being shot.

Both the DA’s report and the independent autopsy confirmed that six bullets entered Perez-Lopez’s body: four on his back, one to the back of his head, and one that grazed his back and entered his arm.

Gascón said Abraham P. and Perez-Lopez had been drinking heavily.

“[The official] Autopsy shows his [Perez-Lopez] alcohol level to be .19 percent—well over twice the legal limit to drive a vehicle,” Gascon said. “We will never know exactly what happened in those split seconds, which direction Perez-Lopez was facing and to whom he posed a threat.”

Two days after Gascón’s decision, the Justice 4 Alex Nieto and Justice 4 Luis Gongora coalitions along with several other coalitions held another rally, this time outside the San Francisco Hall of Justice.

“There is a lack of credibility among the officers,” said Father Smith. “The SFPD lied from the beginning—they’ve changed their stories three times. You can’t blame us for being suspicious”

Ben Rosenfeld, a civil rights attorney not involved with the case, was asked by community advocates to analyze the DA report.

“He [Perez-Lopez] was unaware that he was dealing with officers when he was grabbed by one of them,” Rosenfeld said. “A reasonable officer would never seek, unless dire circumstances demanded it, to physically engage a person who they had every reason to believe might be clutching a knife at that moment. That is an absolute pure recipe for disaster and it resulted in disaster in this case.”

The coalitions are currently organizing a townhall meeting in the Mission District and demanding that Gascón be present. As of press time, it is unknown if Gascón will attend.