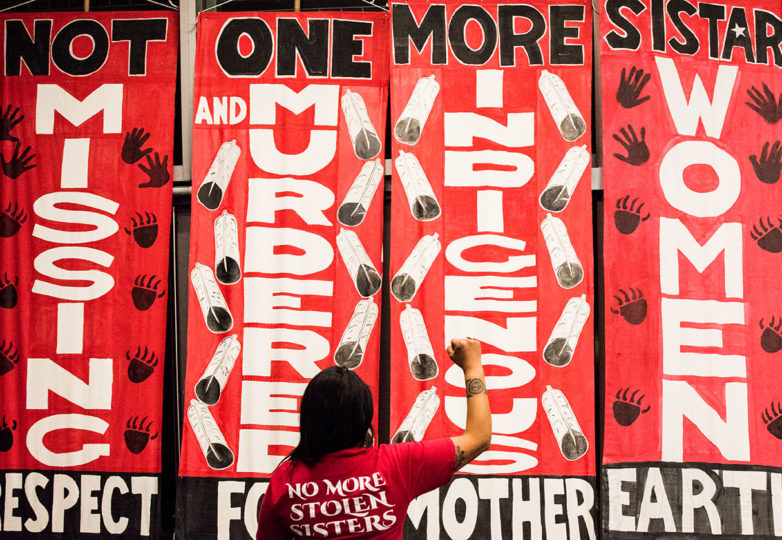 Indigenous activist Josey Tenorio, whose own sister was murdered, raises her fist in solidarity with the message before her at the launching reception of Sovereign Bodies Institute, U.C. Berkeley, Jan 18, 2019. Photo: David Mamaril Horowitz 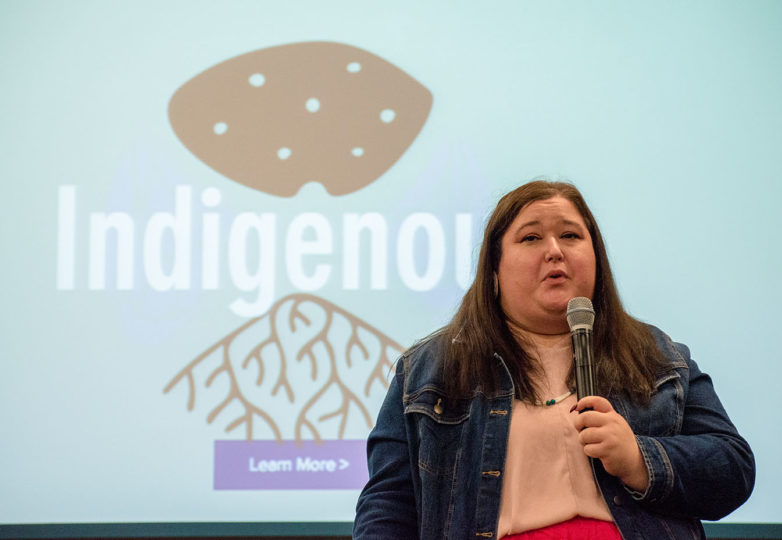 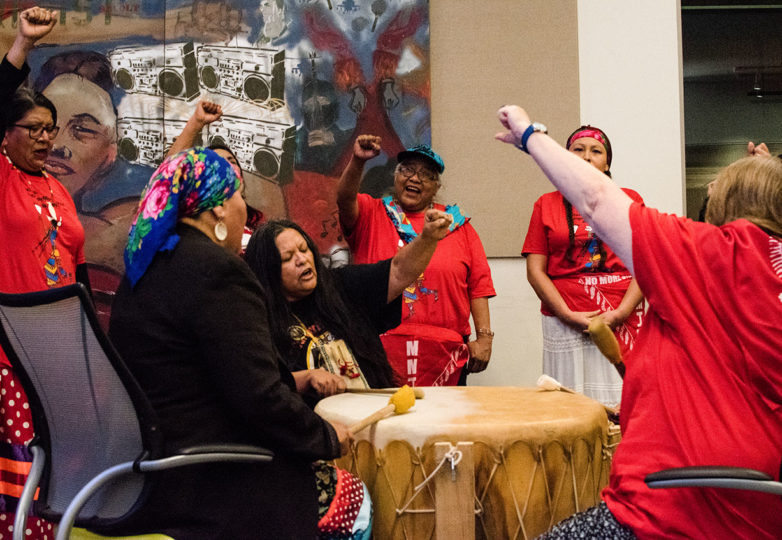 Local Indigenous communities and their allies came together at U.C. Berkeley on Jan. 18 to celebrate the launch of the Sovereign Bodies Institute (SBI), a new home for research that aims to address and counteract violent crimes against Indigenous peoples.

With Native American cuisine from Wahpepah’s Kitchen and performances by the Red Lightning women’s drum group, the reception introduced attendees to the Indigenous scholars and community leaders that make up SBI.

“This is a historical moment,” said Chelsea Miraflor Triollo, program coordinator for Thriving Women, a project of the Seventh Generation Fund for Indigenous Peoples, a long-standing philanthropy group that supports Indigenous women, girls and families. “It’s unprecedented work that has been needed, since it has been legitimized [in America] to murder kill rape traffic Indigenous peoples—especially women and girls.”

It was a report that Lucchesi authored with Urban Indian Health Institute called Missing Murdered Indigenous Women and Girls (MMIWG) that led to the creation of SBI. (El Tecolote reported on Lucchesi and the MMIWG database in its Dec. 13, 2018, issue.)

The impact of MMIWG upon its Nov. 14, 2018, release was immediate, and the report has since influenced policy at the national level. In response to its release Congress amended Savanna’s Act (named for Savanna LaFontaine-Greywind, a Native American woman who was eight months pregnant when she was abducted and murdered) to include tasking multiple agencies with tracking and annually reporting data on missing and murdered Indigenous women and girls, including those from urban areas (who had previously been excluded).

Among many other findings, MMIWG concluded that in 2016, only 2 percent of the 5,712 reported cases of murdered or missing Indigenous women and girls were logged into the U.S. Department of Justice’s database. More than 95 percent of the cases tracked in their findings went unreported by the national and international news media.

Lucchesi came up with the idea for a database of MMIWG five years ago as she was typing her doctoral thesis while coping with her own abusive relationship. It was at that time she realized that there were no reliable records of Indigenous women who were missing or slain.

“I was so angry that if my abuser killed me, it wouldn’t have any meaning because my story wouldn’t be used because there was no place to hold it,” Lucchesi said.

With her left hand broken by her abuser at the time, Lucchesi typed her findings as a part of her 156-page doctoral thesis.

With the establishment of SBI, the original MMIWG database will continue to be expanded upon. Karina Bañuelos, program specialist for MMIW, will take charge of expanding the records to women and girls native to Latin America and Mexico.

“By bridging this gap and weaving together all the histories that are very sacred and violent and troublesome, I feel very honored to be able to … bring names forth of the people that have been lost and to do justice by my ancestors,” Bañuelos said.

Some attendees themselves had personally been devastated by the violence SBI works to address. Activist Josey Tenorio, who performed with the Red Lightning women’s drum group, recalled through tears that her own sister was murdered.