Assault weapons Versus Thoughts and Prayers: a fair fight? 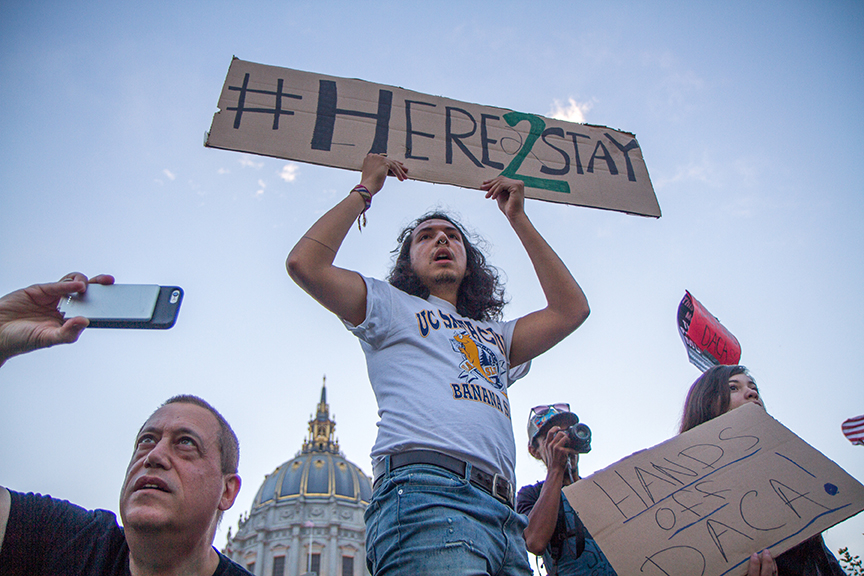 UC Santa Cruz student Michael Carbonaro holds a sign reading #Here2stay in front of San Francisco’s City Hall on Sept. 5, 2017. Carbonaro was one of thousands in San Francisco who protested the termination of DACA. Photo: Drago RenteríaWhile the Senate rejected four different immigration proposals on Feb. 15, a group of experts discussed via national conference call the actions being taken on immigration and the effect they are having on the diverse communities of this country.

The panelists agreed that the issue of immigration is an issue of flesh and blood that is being used to satisfy political ambitions and a White nationalist agenda.

Angelica Salas said that the administration’s attacks against immigrants and refugees are part of the way Trump came to power, that is, exercising “the strictest vigilance against undocumented communities in collaboration with local police.”

Salas, executive director of the Coalition for Humane Rights of Immigrants (CHIRLA) in Los Angeles, added that “the most important thing is to understand that with every attack on the different immigration programs, life itself is attacked, as well as individuals who we see everyday. They fear for their future, the protection of their families, the lack of work and the uncertainty of their status.”

Among the proposals rejected by the Senate were the termination of the visa lottery program for ethnic diversity, a solution for “DREAMers” (about 800,000 undocumented immigrants brought to the United States as children), the immigration program for family reunification, and $25 billion for Trump’s border wall.

Salas also mentioned that programs for refugees are ending. and for more than a year,

“We are seeing vigilance and indiscriminate attacks, the annulment of the legal process that must be followed to detain and deport a person…The DREAMers are treated differently; with them a category of second-class citizen is being created,” she said.

CHIRLA has different support programs for immigrants, one of them being the California Dream Network, which has a youth presence at 33 state colleges and universities. Salas also said that the administration’s immigration policies are based on a White nationalist agenda that states that—based simply on country of origin and religion—”certain individuals are not qualified to enter the United States.”

The press conference was organized by Ready California, a coalition of immigrant services agencies run by the Immigrant Legal Resource Center (ILRC).

From Washington, D.C., ILRC lawyer Sameera Hafiz said that “Trump’s decision in September to cancel the DACA program, has put the lives of 800,000 young people in chaos and uncertainty.”

But the analysts also agreed in considering immigration not so much as a policing issue but as a social problem that has to do with racism; how we relate to communities of color, that look different, who practice different religions and that come from poor countries.

Zahra Billoo said that Trump’s attack on the Muslim community has been constant and she doesn’t see it subsiding soon. Apart from physical attacks and the constant denigration Muslims are suffering, there have been three specific entry bans against Muslims and another against refugees from poor countries. “In total there have been four travel bans by this administration to try to keep the Muslim community and other immigrants out of this country,” said Billoo, who is the executive director of the San Francisco Bay Area chapter Council on American Islamic Relations.

“Trump has taken a very tough position … eliminating diversity from visa programs by severely cutting the visa program for families and increasing surveillance on the border,” Hafiz said. “Today, it is more important than ever to have plans that protect our communities and to continue resisting this agenda that is attacking the people that we defend.”

Adoubou Traore, is the executive director of the African Advocacy Network. Traore said it was essential to look at this issue of immigration from “the perspective of Black immigrants,” whose numbers have increased from 816,000 in 1980 to more than four million today. “What does it mean when we cannot petition for our families? What is the experience of Black immigrants in America? How much do we know what it means to be Black in America?”

“What does it mean when you escape persecution, violence, discrimination and come here to America looking for a safe haven to face the greatest fears?” said Traore, who is originally from the Ivory Coast. “This doesn’t have to do with immigration, it has to do with being Black and an immigrant in America. We have no escape.”

Story by: Fernando A. Torres, Special to El Tecolote