Parker Anthony Wilson was open about his white supremacist views long before the ascension of Donald Trump, at least to those who knew him personally.

But the neo-Nazi from Dublin, CA, who was once arrested for assault and possession of bomb-making materials, has been much more guarded about his identity as of late, even as white nationalism has become more mainstream.

Though active on social media, Wilson has been careful to mask his identity, going so far as to digitally alter photos of himself that he posted through the Twitter account @SunsetKing90, which he opened under the false identity “Mark Bidwell.”

When El Tecolote contacted Wilson on Jan. 18 he denied his association with the “alt-right” white nationalist movement. He also denied that he was behind the @SunsetKing90 Twitter account, which was deactivated shortly after he got off the phone with El Tecolote.

Wilson joined Twitter as Mark Bidwell in June 2015, and was featured on the white supremacist podcast “Fash the Nation” under that alias along with San Jose’s Nathan Damigo (whom El Tecolote reported on in December 2016).

On Sept. 26, 2015, @SunsetKing90 tweeted a photo of a woman, whom El Tecolote was able to confirm as Wilson’s wife. From then until the account was deactivated, Wilson tweeted everything from birthday wishes for Hitler to promoting Identity Evropa, the white nationalist organization founded by Damigo.

According to screenshots captured by El Tecolote, @SunsetKing90 routinely used the hashtag #altright and tweeted at or retweeted Damigo and Identity Evropa at least seven times. 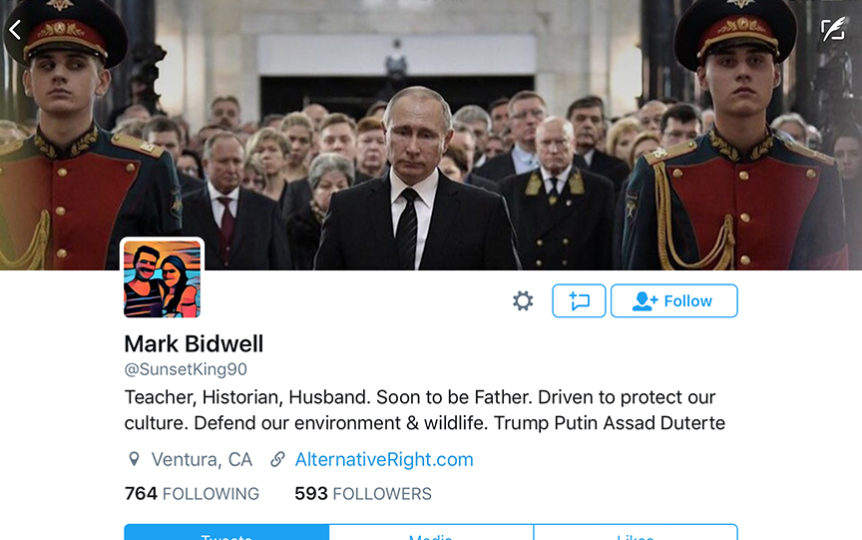 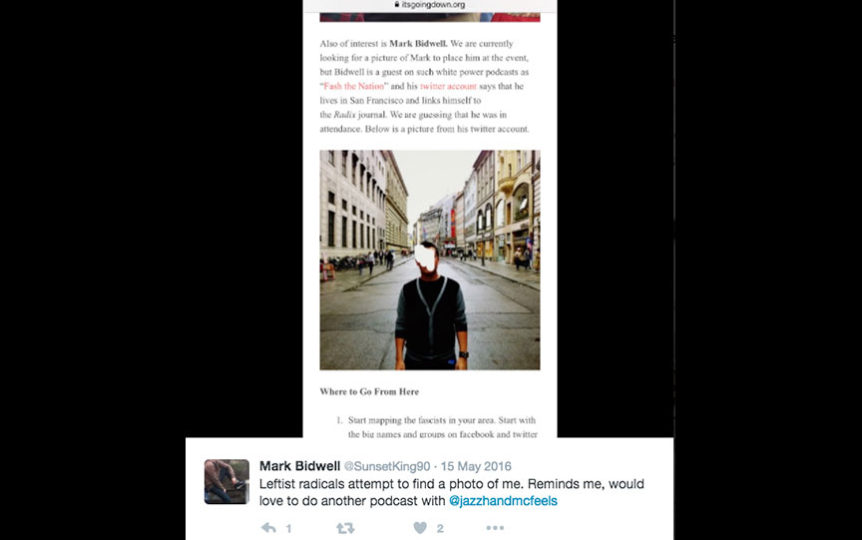 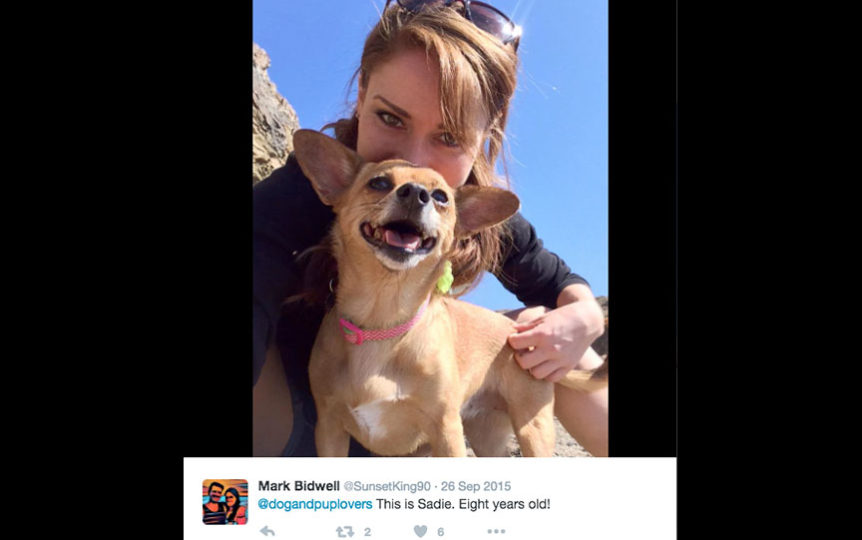 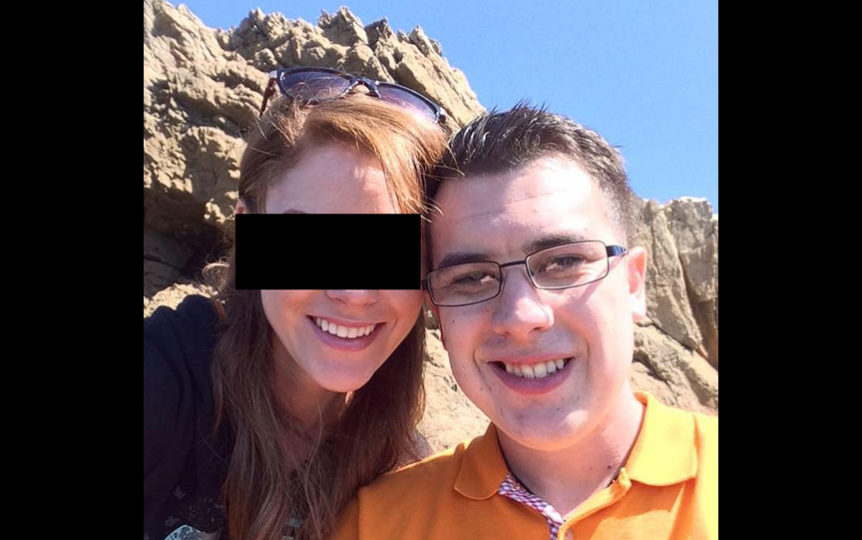 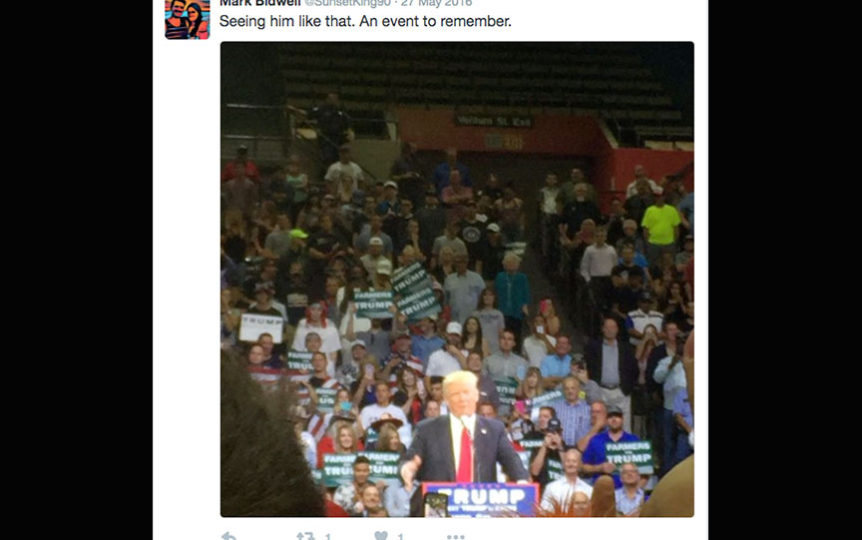 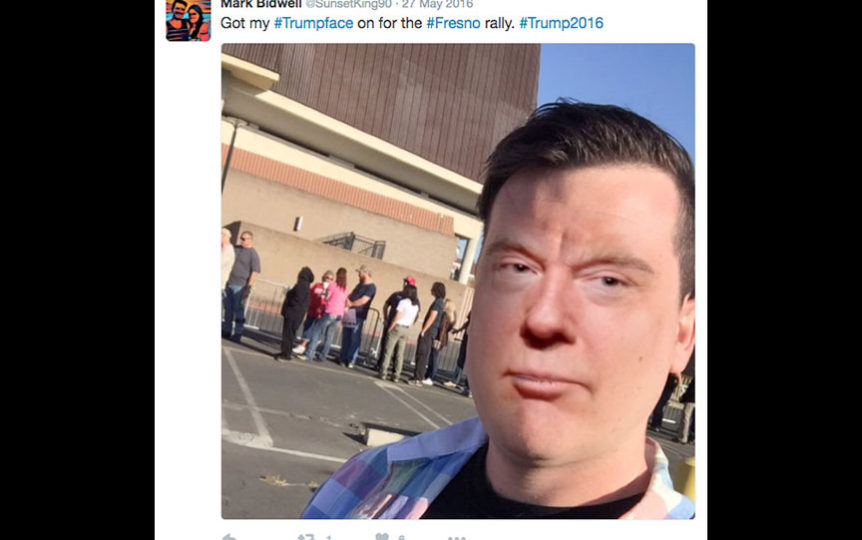 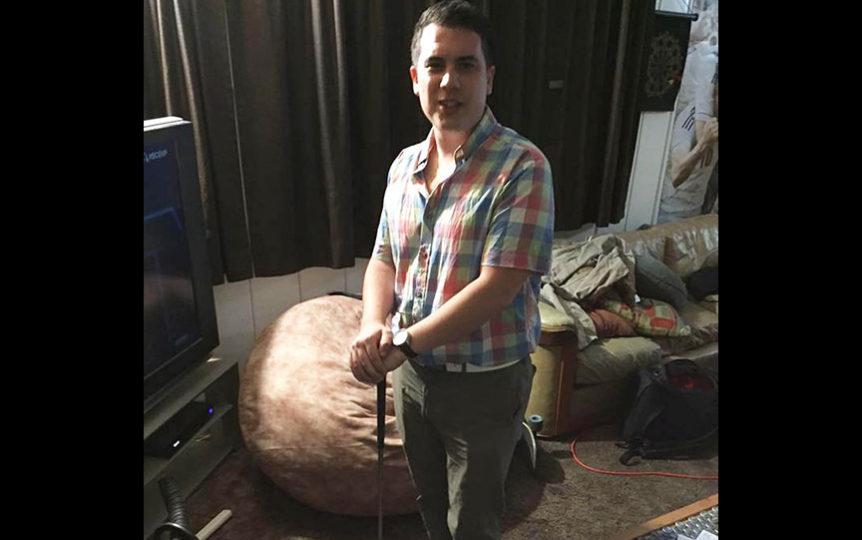 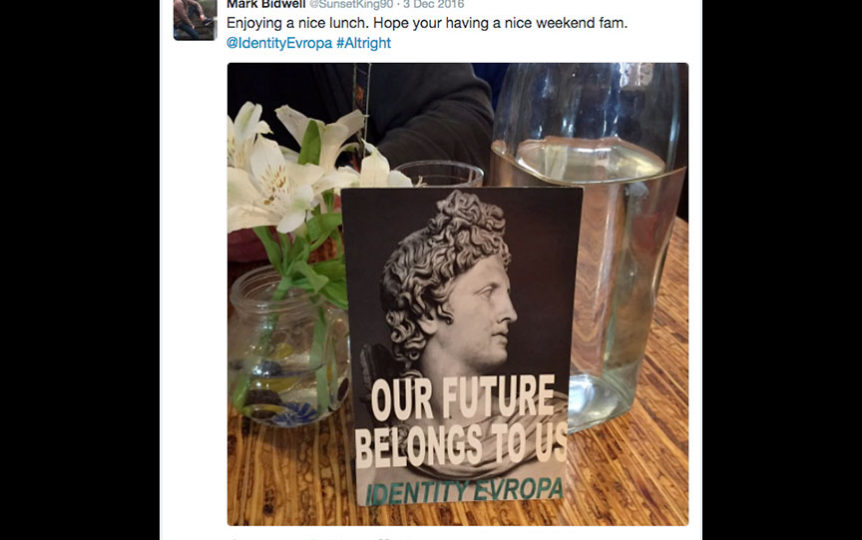 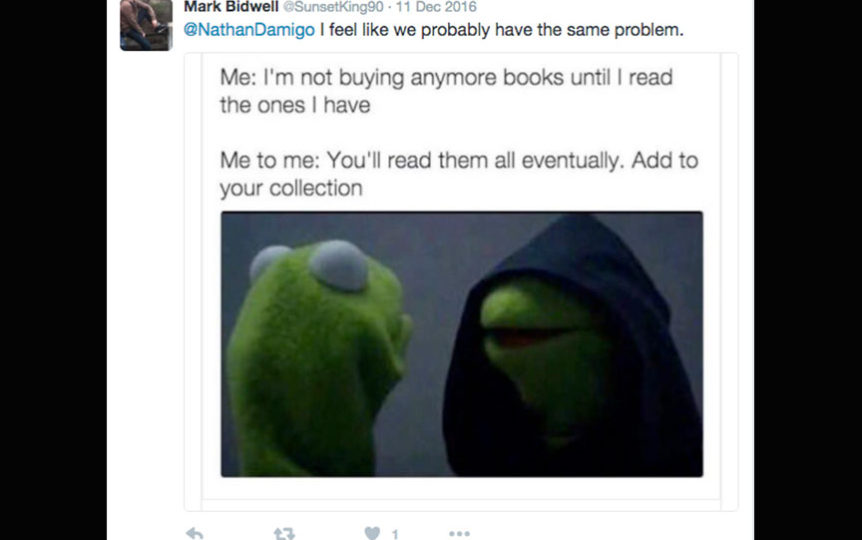 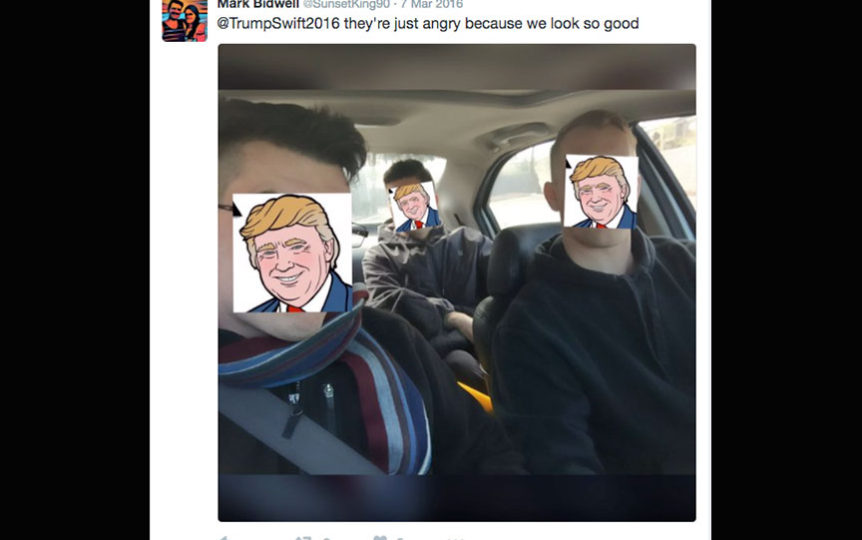 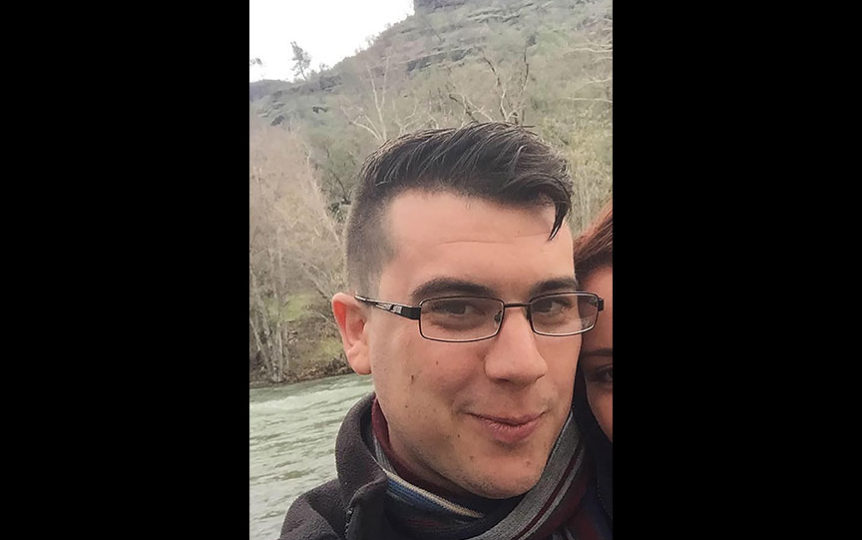 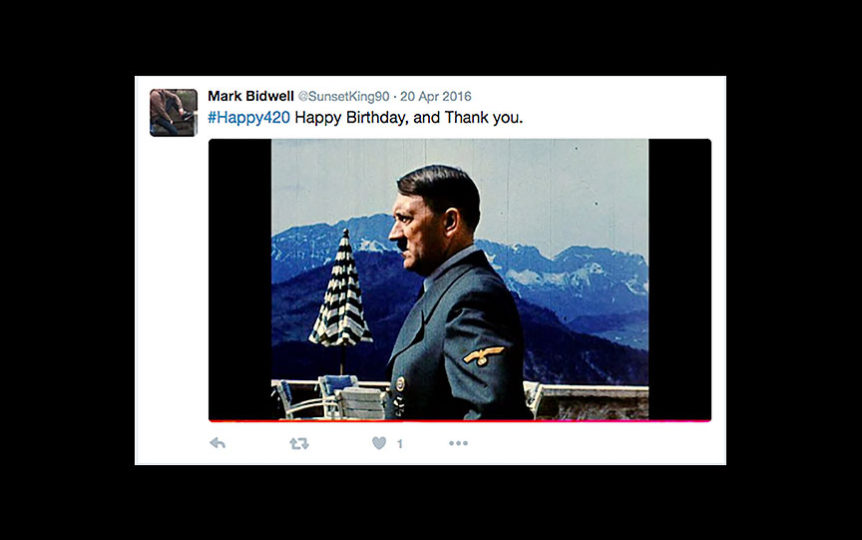 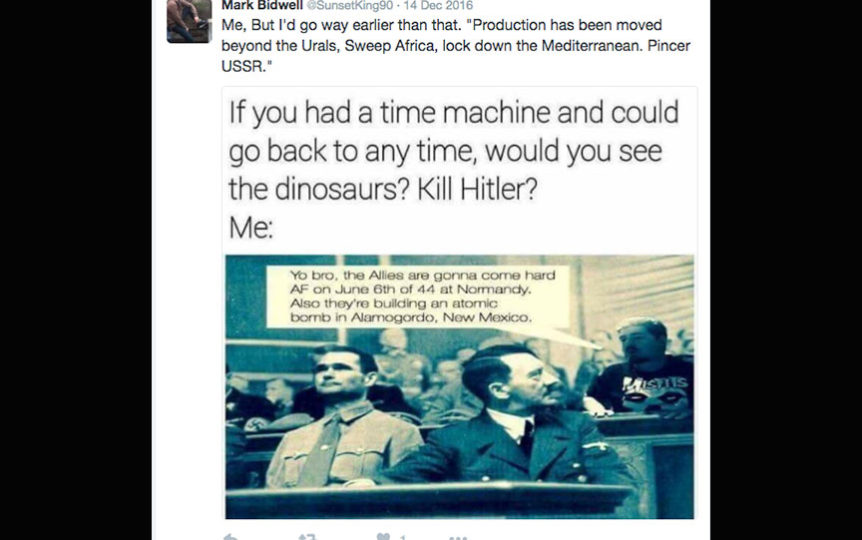 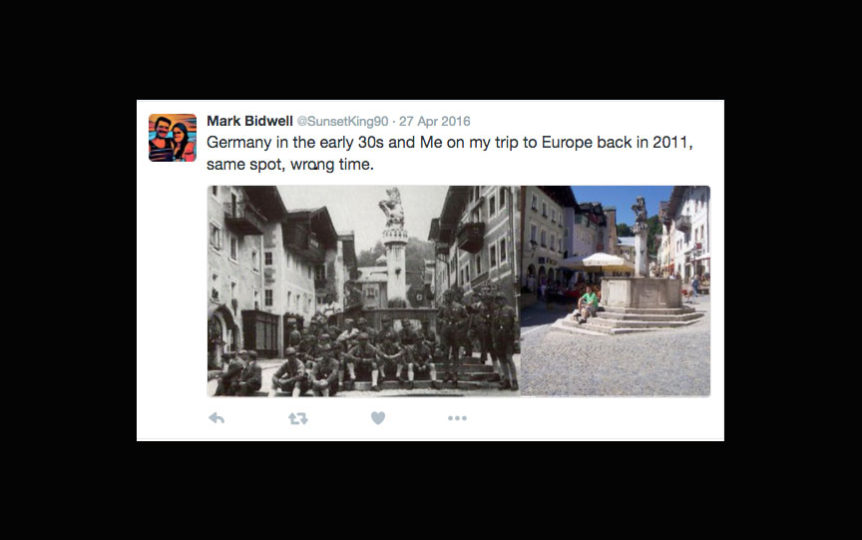 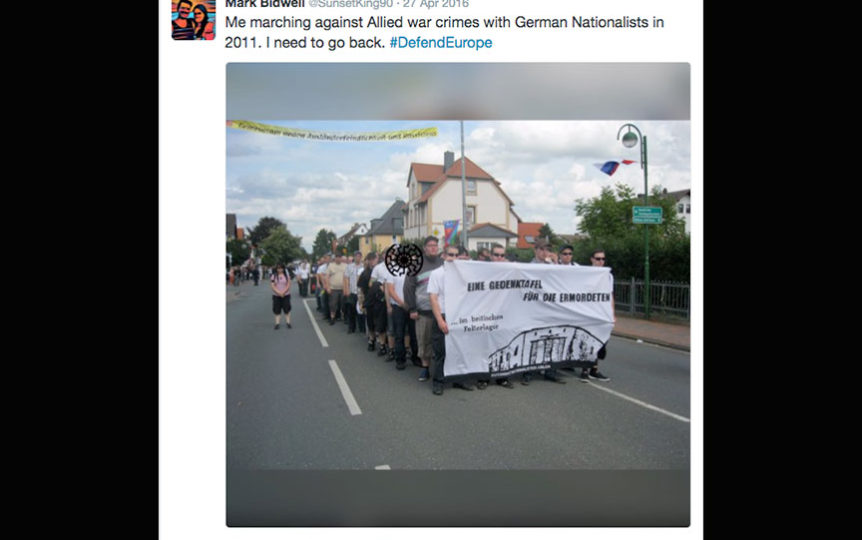 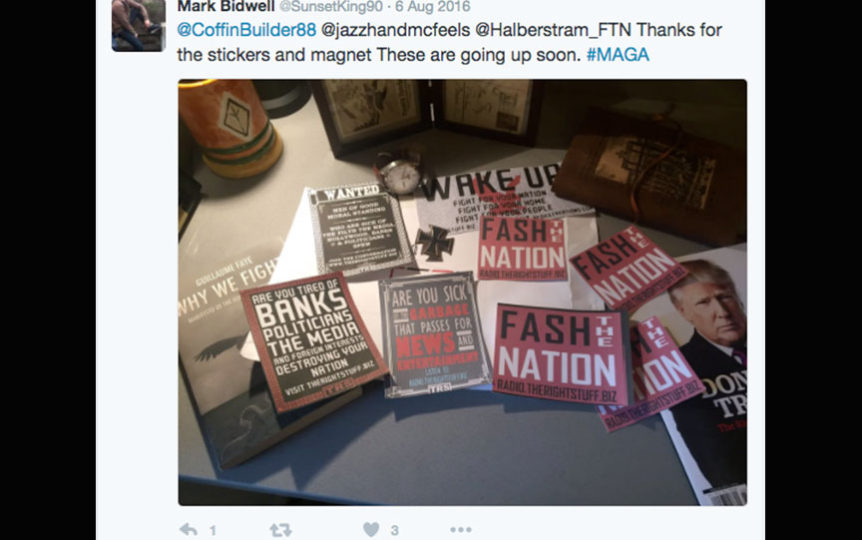 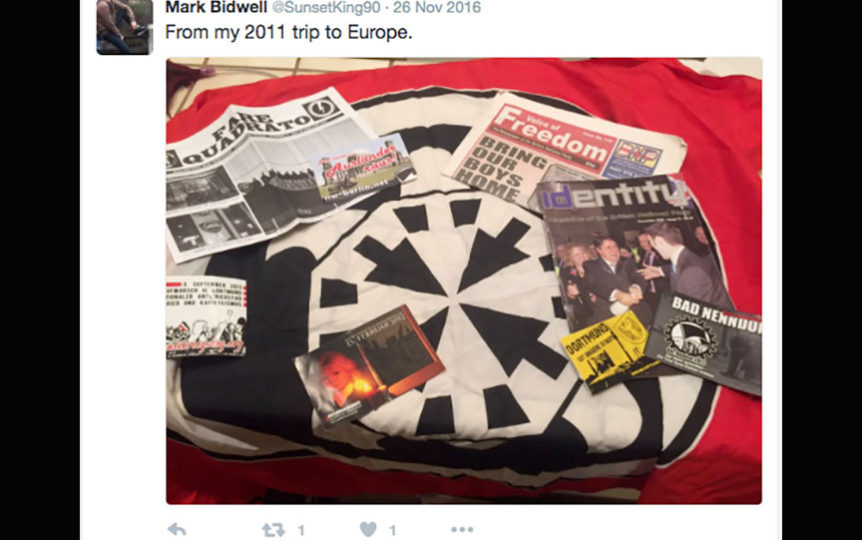 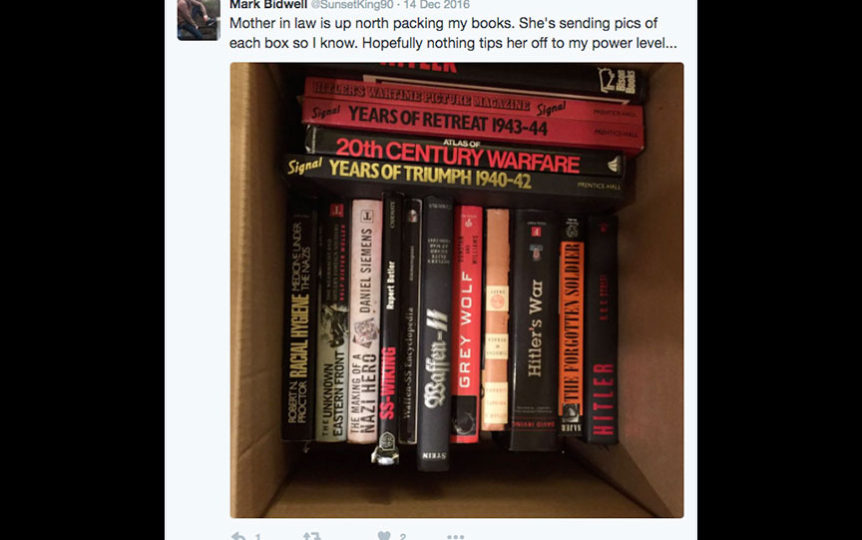 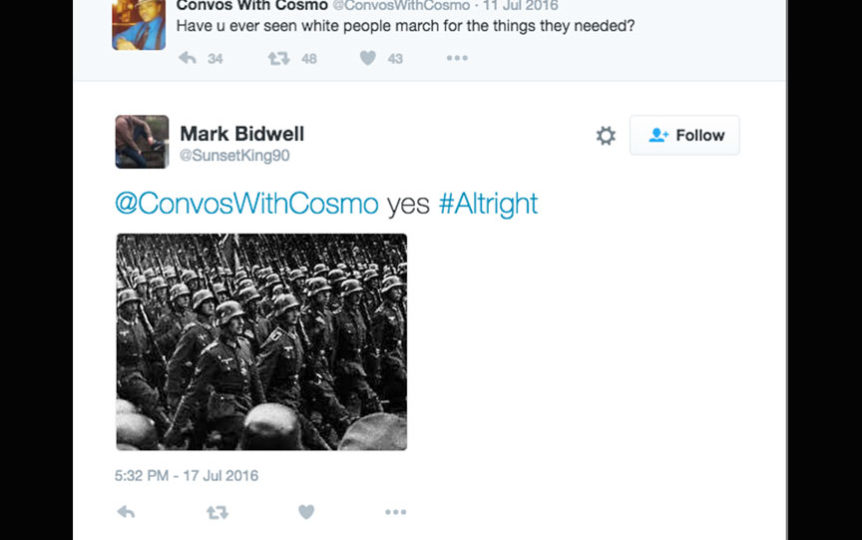 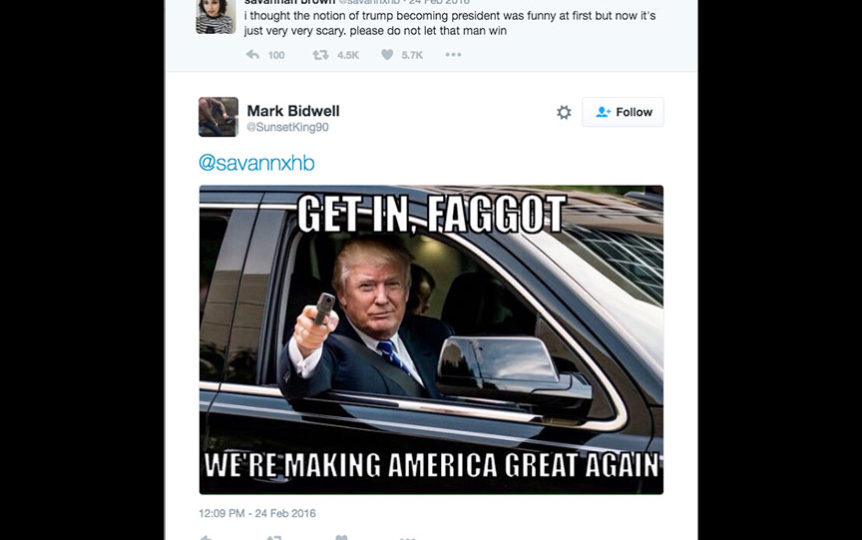 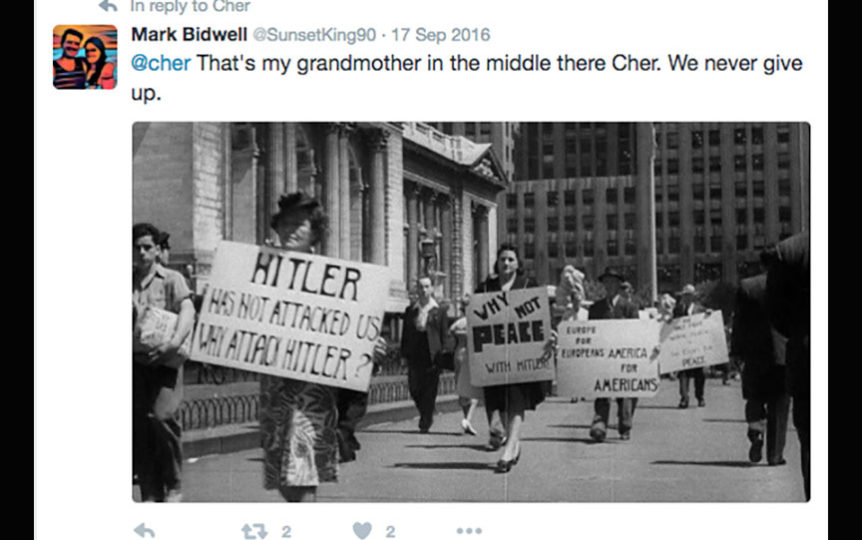 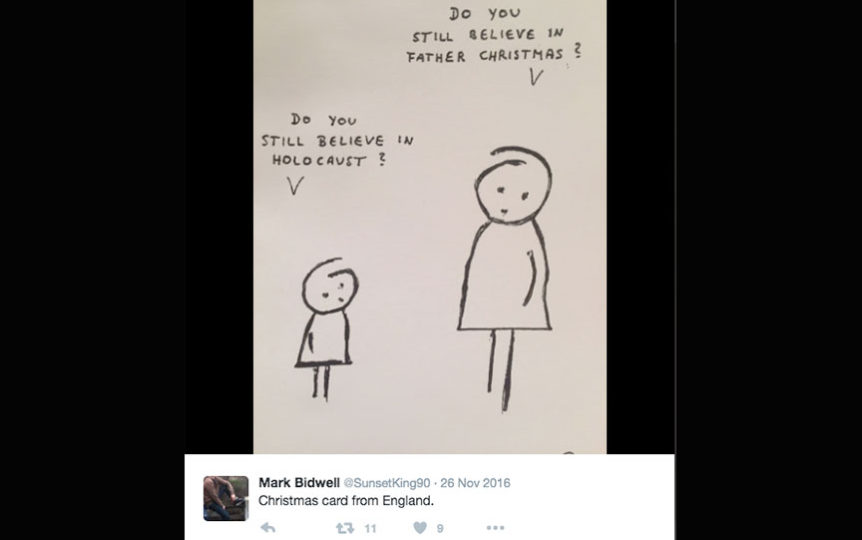 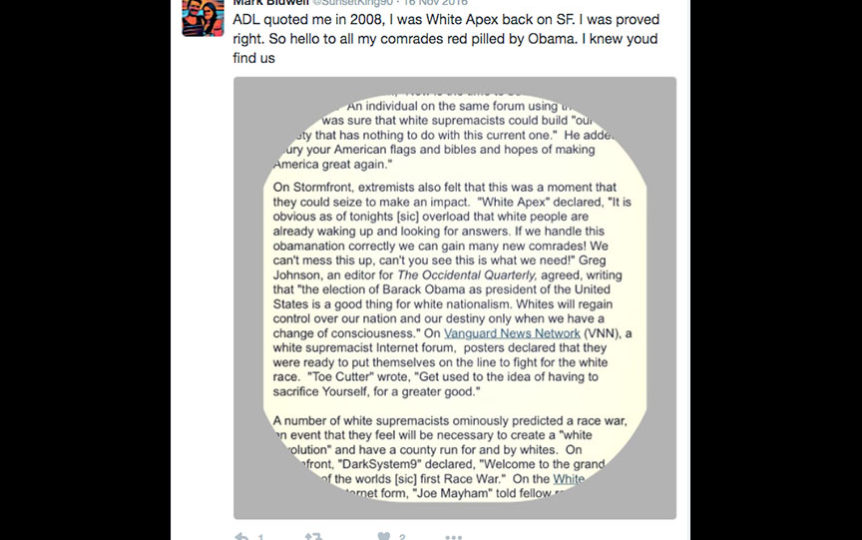 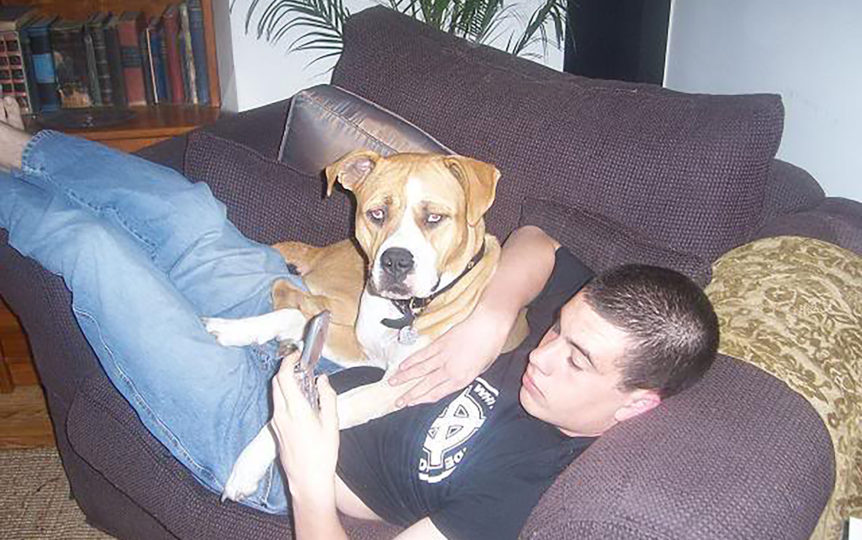 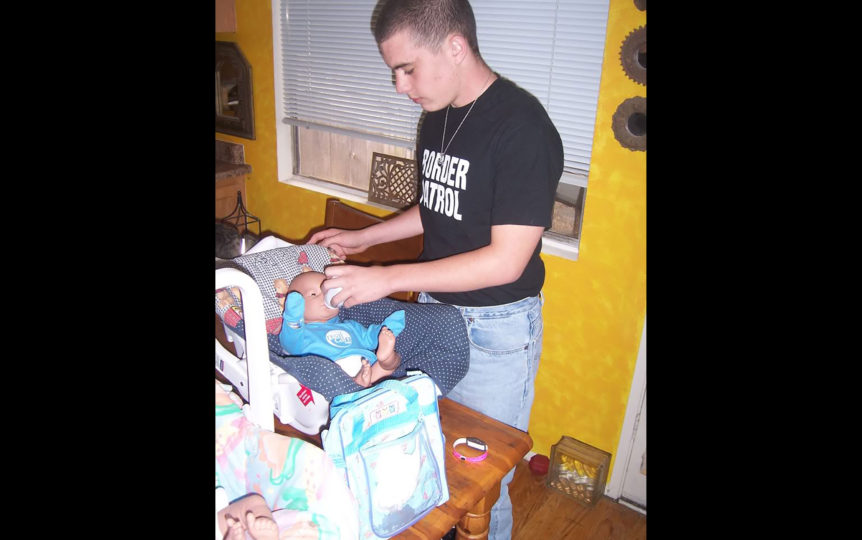 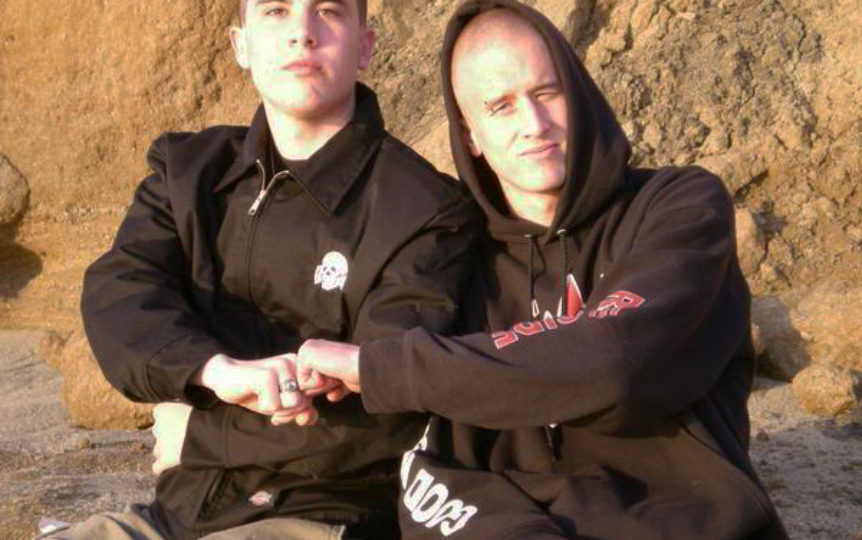 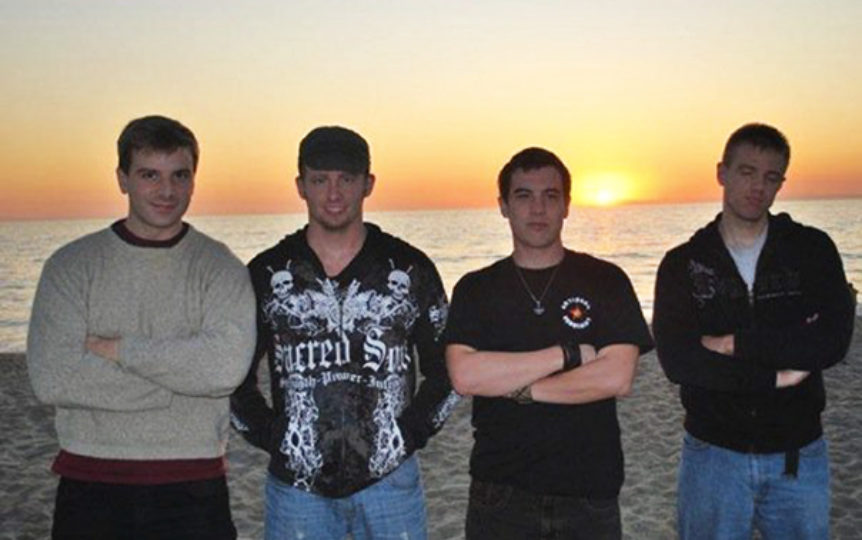 Wilson’s involvement in white nationalist circles began when he was a high school student. His internet history reveals his connections to a web of white nationalist activity throughout the greater Bay Area. In April 2006 at age 15, Wilson joined the neo-Nazi internet forum Stormfront as the user “White Apex.” In some of his earliest posts, he expressed interest in starting a White Student Union at Dublin High School.

Over the next six years, Wilson remained active on Stormfront, his posts ranging from anger over the cartoon character Dora the Explorer, teaching his little brother how to count in Spanish, to an obsession of one day living in a “white only” utopia.

In other posts, he mocked the Holocaust and wrote that Jews control the “media and everything else.” He referred to black people as “muds,” “negroes” and “apes,” and made his distaste for Latino immigrants clear, posting photos of himself wearing a black shirt that read BORDER PATROL. He wrote that Asians “are taking over my city,” and was furious when J. K. Rowling, author of the Harry Potter series, confirmed that the character Dumbledore was gay.

When Barack Obama was elected president in 2008, Wilson took to Stormfront, writing, “If we handle this obamanation correctly we can gain many new comrades!”

Wilson used Stormfront to network with other white nationalists in the Bay Area, creating a Northern California Stormfront group. He organized a “Bay Area Nationalist meet up” on Jan. 3, 2009, providing a personal yahoo email address, which El Tecolote was able to trace back to Wilson.

He participated in numerous actions and demonstrations with BANA, including protests against Folsom Street Fair, the American Israel Public Affairs Committee (AIPAC) conferences in San Francisco and the 2010 film “Machete” by Robert Rodriguez. He also demonstrated against the pro-immigration May Day rally in San Francisco in 2010, where local media reported that Wilson and members of BANA were attacked.

No stranger to violence

On Feb. 11, 2011 Wilson, at age 20, was arrested after hitting someone with brass knuckles in a Safeway parking lot in Dublin. According to court records obtained by El Tecolote, Dublin police officer Mitchell Mensinger arrived at Wilson’s house after speaking with eyewitnesses at the scene.

Wilson was arrested after he admitted to fighting with brass knuckles. Police searched his residence and and found “numerous White Pride paraphernalia, firearms, ammunition and components to make a pipe bomb.”

In Mensinger’s declaration, he describes finding a 14-inch capped PVC pipe that was threaded on both sides, and a cannon fuse underneath Wilson’s bed.

“Based on my training and experience, I believe with the amount of live ammunition found in the bedroom in conjunction with the capped PVC pipe and cannon fuse, Wilson [had] the three major components in close proximity of each other, to make a large explosive device.”

Wilson was represented by Pleasanton-based attorney Scott Woodall. The prosecutor, Alameda County Deputy District Attorney Bill Boselli, agreed to dismiss three of the four felony counts in return for a plea of no-contest, which reduced Wilson’s “assault with a deadly weapon” felony to a misdemeanor.

According to Feb. 23, 2011 court transcripts, when Alameda County superior court judge Christine K. Moruza was informed of Wilson’s plea agreement, she said, “Misdemeanor. Okay. Because I am so booked tomorrow, I just don’t want to do a felony plea in the morning.”

Wilson was sentenced to 60 days in jail (14 of which he had been given credit for), was ordered to pay $355 in fines, and placed on three years probation, during which he couldn’t own or possess any firearms.

When El Tecolote asked why Boselli agreed to the plea, Alameda County District Attorney spokeswoman Teresa Drenick replied in an email that Boselli said: “given all of the facts surrounding the case that it seemed like the appropriate disposition.”

Wilson was arrested again 14 months later for violating the terms of his probation, when police found a broken expandable “billy club” in his trunk during a traffic stop.

Throughout this time Wilson attended Las Positas College in Livermore, CA, before transferring to CSU Chico, where he earned a history degree in 2014. While there, he was president of the German Culture Club, and attempted to earn his M.A. in history.

Wilson was published in the 2016 Chico Historian, a student-run journal that features a collection of undergraduate and graduate class papers. Wilson’s essay, “Increasing Resistance: How Citizens’ Council Values Refused to Perish,” spotlighted the White Citizens’ Council, the 1950s white supremacist and segregationist group based in the deep South that opposed racial integration and orchestrated a number of tactics to oppose the Civil Rights movement.

Chico history professor and department chair Dr. Stephen Lewis confirmed to El Tecolote that Wilson was an officer in Chico’s History Honors Society and said he and others in the department weren’t aware of Wilson’s white nationalist affiliation. Wilson, who was finishing up his master’s, left early to take a job as public affairs director with the Southern California nonprofit Californians for Population Stabilization (CAPS).

Jo Wideman, executive director of CAPS, told El Tecolote that Wilson had worked for CAPS for six months, and that she and her organization “had absolutely no knowledge” of Wilson’s white nationalist ties.

“We were not aware of Mr. Wilson’s past activities as a teenager,” Wideman wrote on Feb. 7 in an email to El Tecolote. “As of today, he is no longer employed by CAPS. Our organization is absolutely, positively, unequivocally committed to fair immigration policy that benefits ALL Americans, regardless of religion, race or socioeconomic status.”

CAPS bills itself as an organization devoted to improving the “quality of life for all,” but its website shows that it strongly opposes most forms of immigration and immigrant rights as well as birthright citizenship for Americans with undocumented parents.