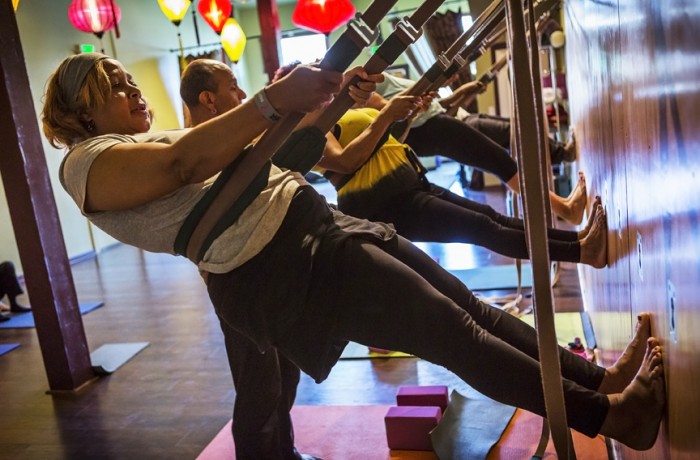 Deborah McNaulty hangs from belts that are hooked to a yoga wall during the seniors’ free class on Sept. 19. TriFusion Yoga is the only yoga studio in San Francisco with a yoga wall, according to Luna. Photo Manuel Orbegozo 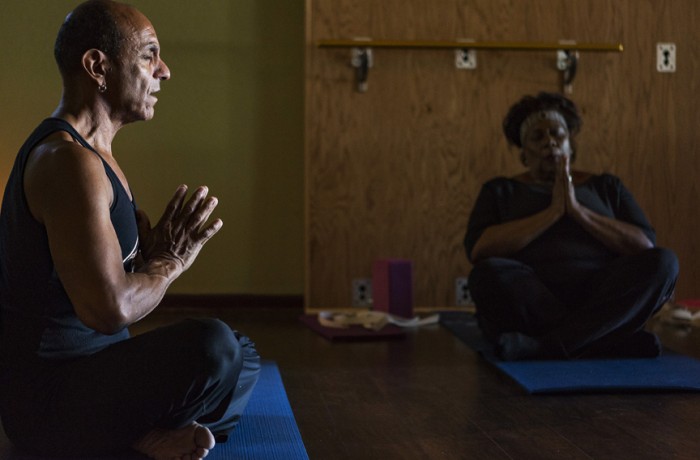 Armando Luna (left) asks his students to take the energy out of the studio into their community and beyond. Photo Manuel Orbegozo 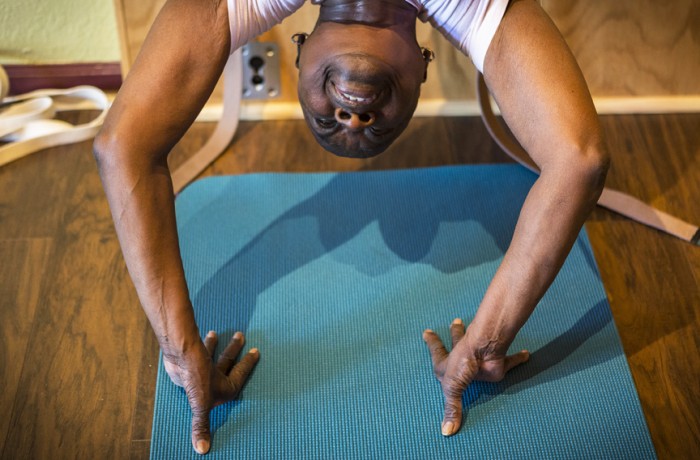 With the help of a belt strapped to her waist, 73-year-old Mary Crenshaw supports the weight of her body with her arms. Photo Manuel Orbegozo 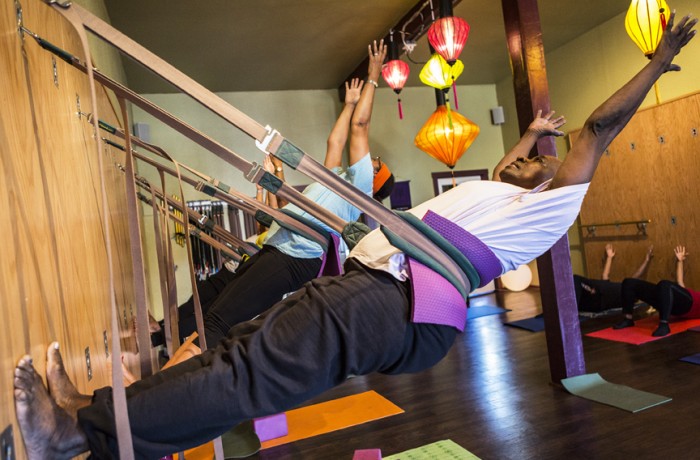 Deborah McNaulty hangs from belts that are hooked to a yoga wall during the seniors’ free class on Sept. 19. Trifusion Yoga is the only yoga studio in San Francisco with a yoga wall, according to instructor Armando Luna. Photo Manuel Orbegozo 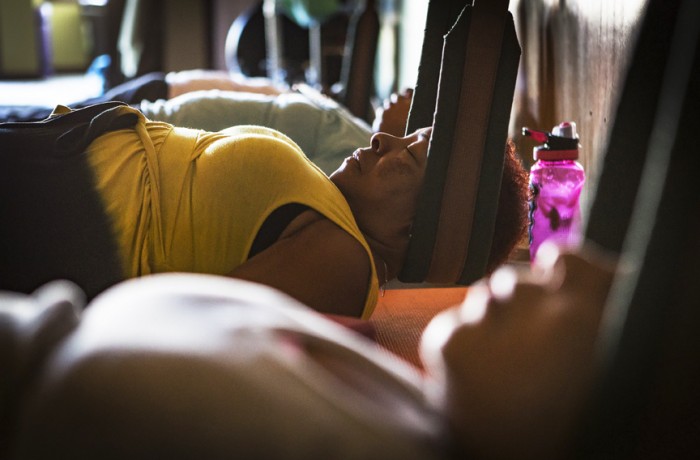 Tina Jones, 61, rests her head on a strap during the last stage of class, where students enter in deep meditation. Photo Manuel Orbegozo 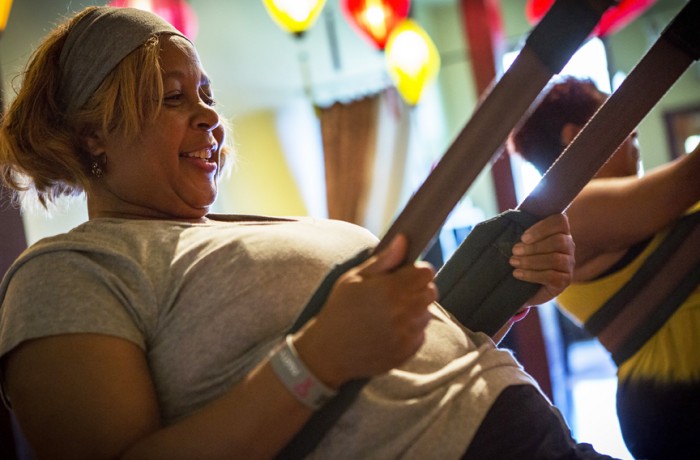 Deborah McNaulty hangs from belts that are hooked to a yoga wall during the seniors’ free class on Sept. 19. Trifusion Yoga is the only yoga studio in San Francisco with a yoga wall, according to instructor Armando Luna. Photo Manuel Orbegozo

The marginalization of communities of color in San Francisco has resulted in low levels of education, high crime rates and low-income levels per capita, but it is also responsible for the lack of accessible fitness centers which has hurt the health of many of the city’s residents, according to the San Francisco Department of Public Health (SFPH).

Across from the Bayview Opera House on 3rd Street, TriFusion Yoga—the first and only yoga studio in the Bayview—has been offering free classes to low-income youth and seniors since it opened in January.

TriFusion Yoga’s owner and chief instructor, Armando Luna, says his goal is to provide a space where anyone—regardless of their economic status—can exercise the spirit through meditation, while increasing the body’s strength and flexibility.

“I wanted to offer a non-religious space that was comforting to people inside and outside the studio,” said Luna, who has been living in the Bayview since 2001 and is known on the street as “Yoga Master.”

In September, TriFusion Yoga partnered with Healthy Hearts SF, a campaign financed by the Centers for Disease Control and Prevention, which seeks to increase cardiovascular health within the black and Latino communities—where at least 30 percent of residents live below twice the federal poverty level, and where 25 percent of adults don’t have a high school education.

The Bayview neighborhood is one of those communities. There, a person’s average annual income is $21,890, according to the American Community Survey. Nearly half of its residents live well below the federal poverty level.

“It’s going to take a community effort. We want everyone who has touched our lives in some way to encourage someone else to participate in physical activity,” she said.

The yoga master
The 58-year-old Luna has never held an office job, because the long hours of sitting in front of a computer contradicts his active spirit. He’s always opted for a profession that allows him to help others: soldier, nurse, personal trainer, and for the last seven years, yoga instructor.

“The energy in this place should flow beyond the studio,” Luna said.

Before starting his company, some of Luna’s colleagues warned of the potential risks of opening a studio in an area with high crime rates and where the community was predominantly black.

“I asked a black man from here, ‘Why don’t black men come and do yoga?’” said Luna. “He told me that a black man goes through life with his guard up for being black, and to do yoga one should let their guard down, which means you have to be vulnerable. That’s very difficult.”

To walk in and attend a class costs $17, but Luna welcomes those who cannot pay the full amount. He also offers free classes to parents who want to take their kids to art classes held in a separate room, with the option of joining them to learn a few yoga poses.

“They come in groups and encourage others to come, they motivate one another and if one person can’t do what another can, they’re not criticized. It’s a community here.”

Breaking the cycle
The night Deborah McNaulty learned that her systolic blood pressure was at a height of 186/102, she knew she had inherited her mother’s condition and could suffer a heart attack at any time. She didn’t eat that night and wept, for she didn’t want to be another black woman dependent on medications.

“Our health is in danger,” said McNaulty, referring to some of the harmful dietary habits within the black community. “We are killing ourselves with the food we eat.”

According to the Death Statistical Master Files 2010, the black community has the highest mortality rate in San Francisco, being 2.5 times higher than rates among other ethnic groups with the same cause of death. Over 40 percent of blacks are diagnosed with hypertension, according to the California Health Interview Survey 2009.

McNaulty, who has since given up eating salt and other habits detrimental to her health, now exercises six times a week. Every Monday she religiously attends TriFusion Yoga’s free classes, where she says she feels like someone else.

“You feel rejuvenated, it’s the best kind of feeling,” she said. “My friends tell me that now they see me carry myself full of confidence.”

At 61 years old, her goal is to get off her blood pressure medications and to lose 25 pounds.

“I leave TriFusion in another zone, in another space. Whatever problems you had no longer matter,” said McNaulty, who at the beginning of each class closes her eyes and imagines herself transporting to northern France, where her daughter lives.

“Even if people come here just to look around or get a bit of serenity for five minutes, I feel I’ve done my job putting a studio here,” Luna said.

This story was published in conjunction with New America Media.