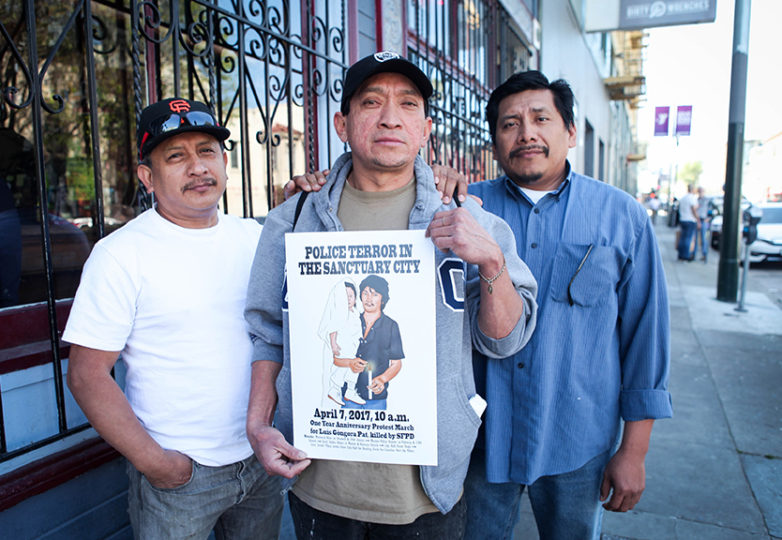 The family of Luis Góngora Pat, who was fatally shot by SFPD on April 7, 2016. (L-R) Luis Góngora Pat’s cousin Luis Poot, his brother José Góngora Pat and his cousin Carlos Poot stand on 17th Street while holding a poster of the “Police Terror in The Sanctuary City” march on April 1, 2017. The march is scheduled for Friday, April 7, on the one-year anniversary of the death of Luis Góngora Pat. Photo: Ekevara Kitpowsong 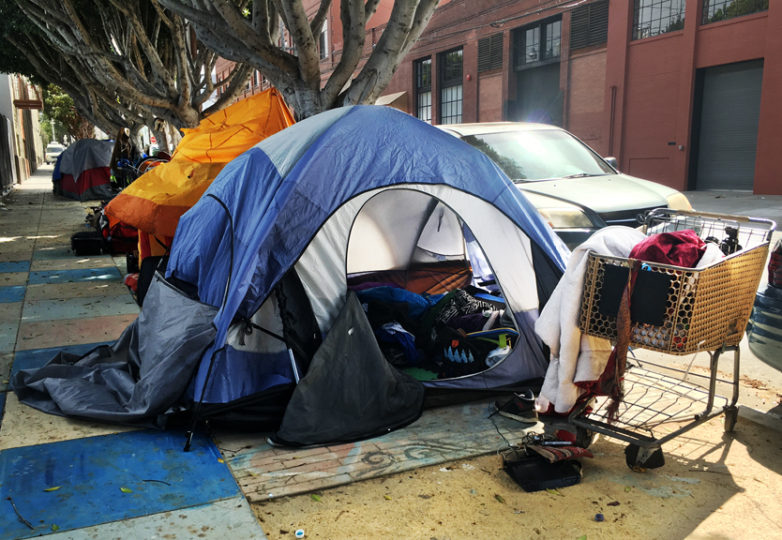 The tent on Shotwell between 18th and 19th streets that belonged to 45-year-old Luis Góngora Pat, who was fatally shot by SFPD on April 7 2016. Photo Joel Angel Juárez 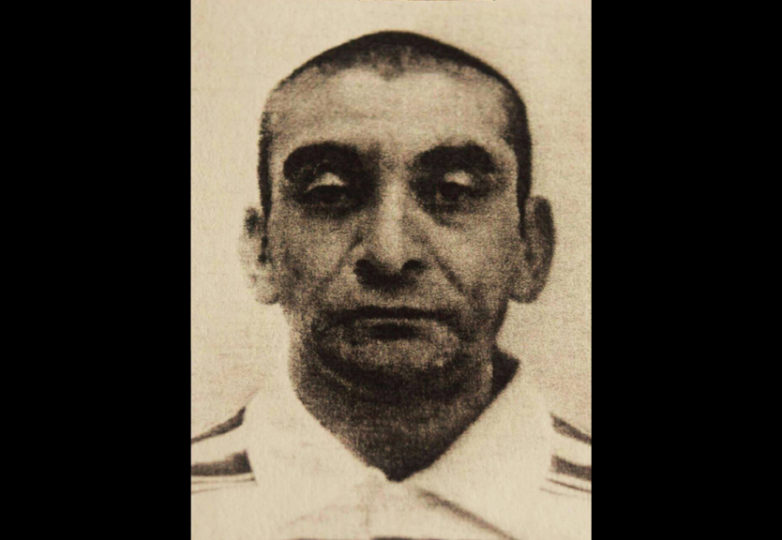 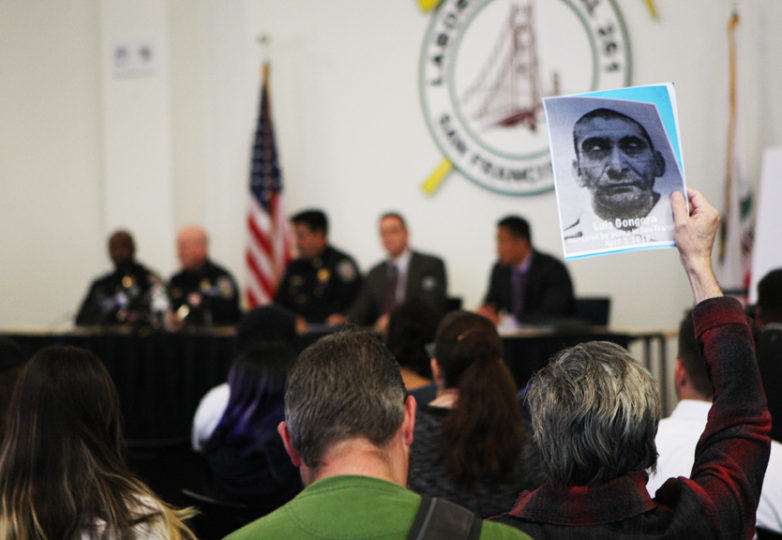 Frank Sosa, a member of the Anti Police-Terror Project, holds a sign with the portrait of Luis Góngora Pat during a town hall meeting on April 13 held at Laborers’ Local 261 addressing the fatal shooting of Góngora by SFPD. Góngora, a homeless man, was shot by SFPD on Shotwell Street between 18th and 19th streets on April 7. Photo Joel Angel Juarez 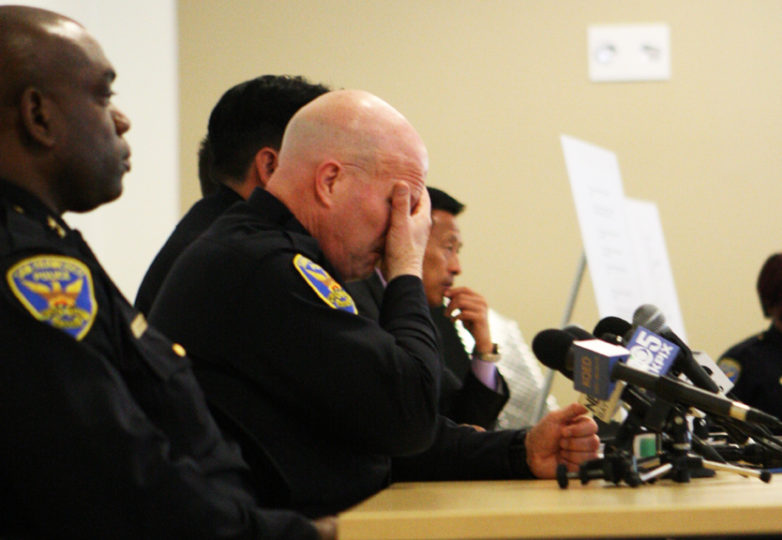 As the one year anniversary of Luis Góngora Pat’s death approached, El Tecolote reached out to Góngora Pat’s cousins—Luis and Carlos Poot—and his younger brother Jose in hopes of learning more about the 45-year-old Yucatec Mayan man who was killed by SFPD officers on April 7, 2016.

The tragic story of Góngora Pat is one that follows the familiar narrative of the immigrant leaving their homeland in search of a better life, and it offers a glimpse into the difficult reality that many indigenous immigrants face.

Góngora Pat and his family come from rural Yucatán, where indigenous Mayan communities are linked by dirt horse trails used to transport maiz and other local agriculture. There are no paved roads, no cars. If you need to get somewhere, you walk or ride horseback.

They are of people who toil the land, harvesting crops on “ranchos” as a means to survive, selling what they have left for little pay.

“The majority of us there didn’t have cable, radio, television, bicycles,” said Góngora’s cousin Luis Poot, who came to San Francisco in 1989—the first of his family to make it to the United States. “It was hard leaving my family. That is the most difficult thing that I have ever done. To have your wife crying with your kids, and seeing your father live in poverty and asking if you can help him, and having to tell him I can’t because I’m leaving. It’s really difficult.”

In their native Yucatán, these Mayans are outsiders in their own ancestral land. They’re raised speaking their ancient mother tongue, only to be forced to learn Spanish once they begin school. Those who make the journey north with hopes of prosperity do so knowing they’ll face the challenge of learning yet another language.

Luis and Carlos, who were privileged to learn Spanish in school as children, can speak and understand some English today. Their cousin Jose Góngora, and his late brother Luis, weren’t as fortunate.

“We can say that Luis [Góngora Pat] grew up even poorer than us,” Carlos said.

Not knowing how to read or write and speaking limited Spanish, Góngora Pat followed his cousins and brothers to San Francisco in 2003-2004, leaving behind three children, his wife and his parents. He worked at Mel’s Diner on Mission Street as a dishwasher alongside many Mayan Yucatecs for nearly a decade, routinely sending money back home.

He lost his job, however, due to communication issues with new staff at Mel’s. Then he lost his apartment at 1751 Market St., which he had shared with his brother Jose and another roommate, shortly afterwards. According to Góngora Pat’s family, his roommate left, and though he continued to pay rent, he didn’t have proof of payment, which led to his eviction.

The Góngora brothers found themselves on the street.

“There are many people on the street who aren’t bad people,” said Luis Poot. “I wanted to help both [Luis and Jose], but I didn’t have room … in my house. If I had room, Luis would still be alive.”

“To think about what happened, it’s infuriating,” he added. “The police aren’t here to kill us, they’re supposed to help us. They’re here to protect lives, not take them.”

There were 11 fatal officer-involved shootings in San Francisco between 2014 and 2016, and District Attorney George Gascón has only issued a ruling on one: that of Alex Nieto, where he declined to charge the officers involved, citing their actions as lawful.

Since the death of Nieto, the Nieto family have been outspoken in demanding accountability from the SFPD, while still offering moral support for families and friends of those who been killed by police.

“It’s nice to be able to talk to people who have gone through this,” said Luis Poot, of the Nietos. “And to have that warmth from a family who has experienced this, it really helps you understand what you’re going through. You tend to forget how this is affecting you.”

On Friday, the anniversary of Góngora’s death, his family and friends will gather at the spot on Shotwell Street where he was killed for a spiritual ceremony followed by a march to City Hall in remembrance of those killed by the San Francisco Police Department. The march also aims to pressure the District Attorney to charge the officers involved in Góngora’s death as well as the officers involved in other fatal shootings.

All three, Luis and Carlos Poot and Jose Góngora, will march for Luis on Friday. They hope for justice, something that has remained painfully elusive for family of those killed by police.