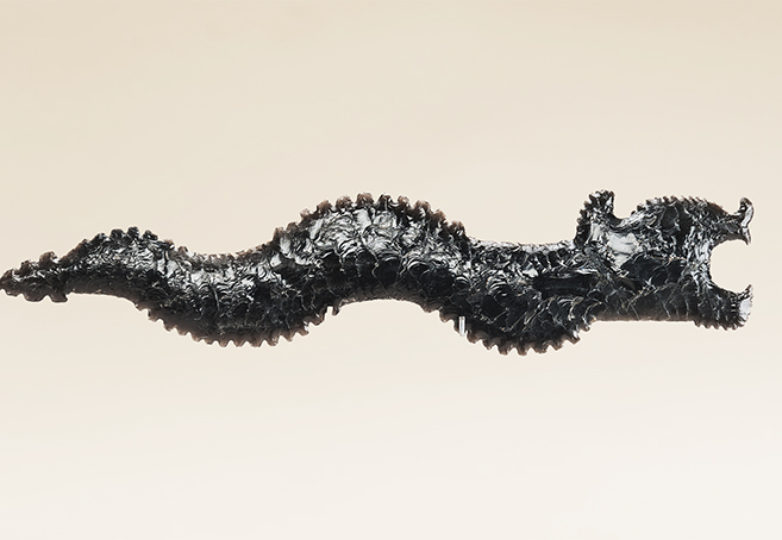 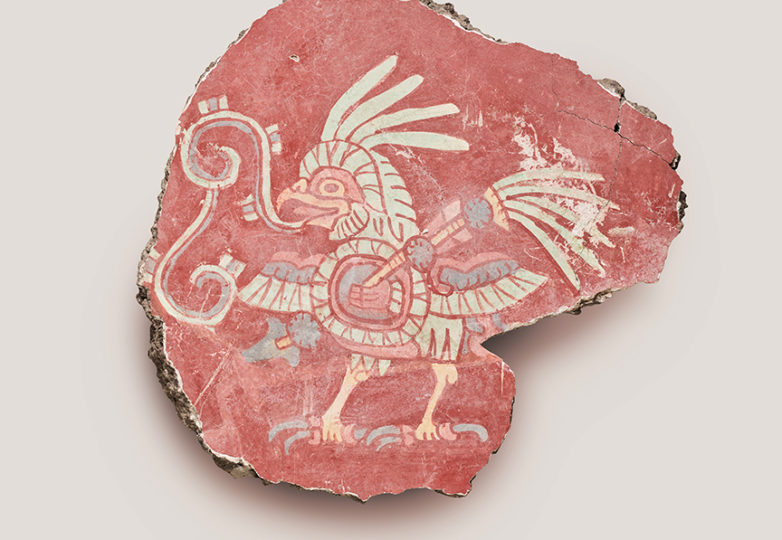 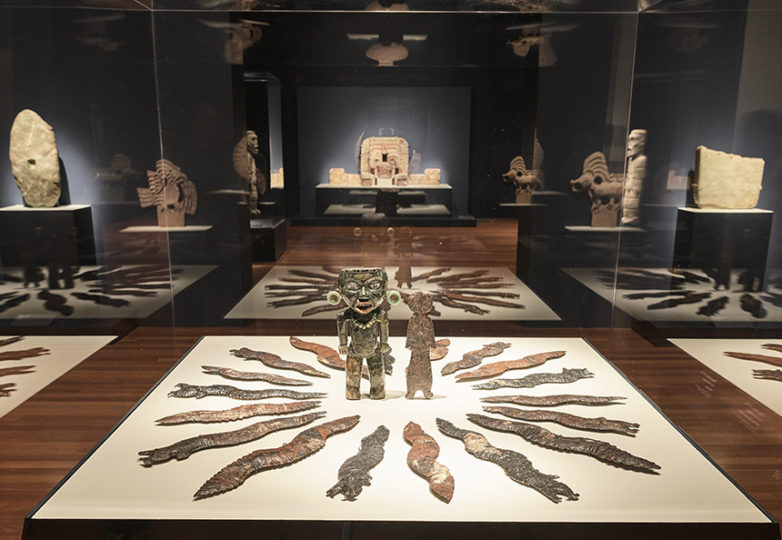 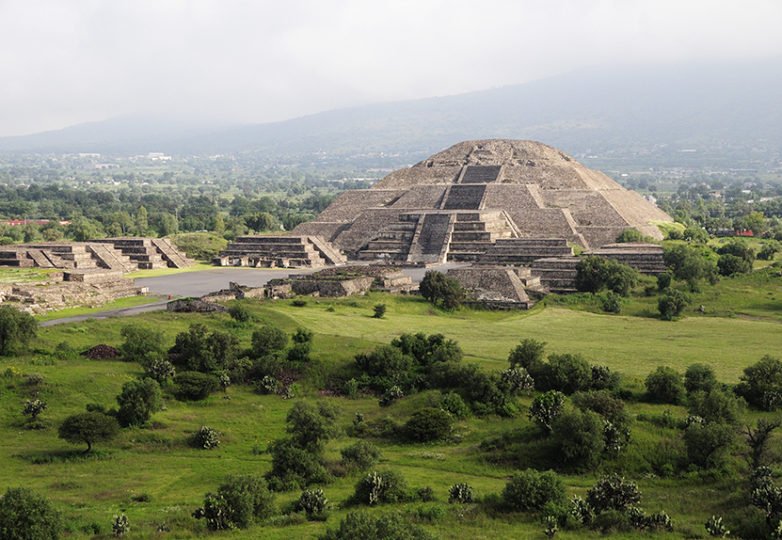 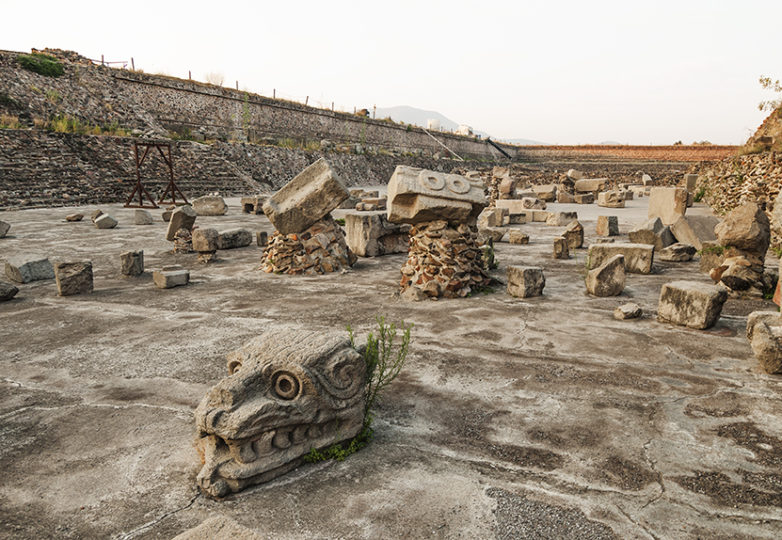 View of an area immediately east of the Feathered Serpent Pyramid, looking south. The fragments seen here tumbled down from the eastern facade of the building; some may have been deliberately thrown down in an attempt to “desacralize” the pyramid. Photo: Jorge Pérez de Lara Elías/INAH. Courtesy: Fine Arts Museums of San Francisco 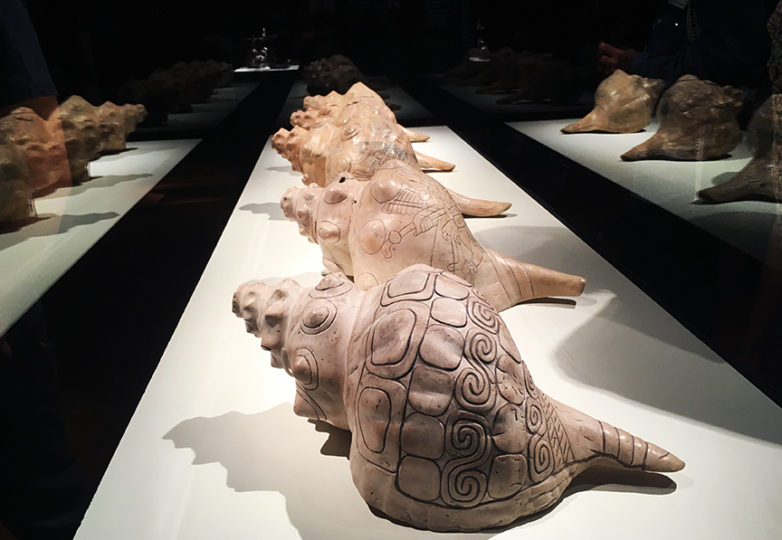 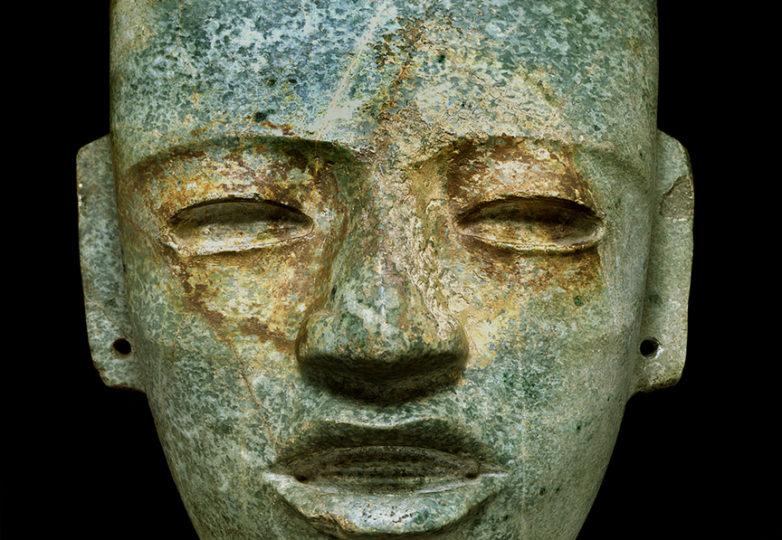 It’s been nearly a quarter of a century since the de Young Museum last hosted an exhibition from Teotihuacan, the vast and mysterious, ancient pre-Columbian civilization just outside of Mexico City.

In the time since, archaeologists have made significant discoveries during excavations that have led to new findings. Mexican archaeologist Sergio Gomez discovered an underground tunnel underneath the Pyramid of the Feathered Serpent in 2003.

That discovery led to the museum’s latest exhibition “Teotihuacan: City of Water, City of Fire,” which premiered on Sept. 30.

Setting up the major exhibition, which includes more than 200 artifacts, took much effort and collaboration between the Fine Arts Museums of San Francisco, the Los Angeles County Museum of Art and the Secretaria de Cultura through the Instituto Nacional de Antropologia e Historia de Mexico. But more importantly, the exhibition is a direct result of Gomez’s discovery of the tunnel.

“What brings us together today is the magnificent exhibition ‘Teotihuacan: City of Water, City of Fire,’ which will allow an American audience to marvel at the ancestral majesty of our forebears,” said Jose Enrique Ortiz Lanz, national coordinator of museums and exhibitions of the National Institute of Anthropology in Mexico City. “It—Teotihuacan—was an authentic metropolis like the ones we live in today with complex resources, cultural diversity, booming commerce and a solid urban landscape that harmonized with the paths of the universe.”

Teotihuacan was established in the first century BCE (Before Common Era). By the fifth century CE (Common Era), it had evolved into an important urban center and multicultural metropolis, becoming the largest city of Mesoamerica and the Western Hemisphere. The so-called “City of the Gods” lured migrants from all over Mesoamerica and it is estimated that approximately 100,000 people lived within the city. However, around 550 CE, the city was destroyed by fire, ending a 400-year reign.

Approximately 900 years after its destruction, the Aztecs made their way into a ghost city in the northeastern part of the Valley of Mexico. There, the Aztecs considered Teotihuacan to be the city where the gods brought the world into existence.

“Teotihuacan means the place where men become gods,” said Lucio Arturo Oliva Ortiz, who was in charge of maintenance of the archeological zone of Teotihuacan from 1975-76.

The murals, feline sculptures, incense burners, and pendants on display bring life throughout the galleries of the de Young.

The exhibition is hosted across several of the museum’s galleries. The first gallery introduces the viewer to Teotihuacan art forms and great deities of Mesoamerica that include the Storm God, the Old Fire God, the Water Goddess and the Maize God.

The second gallery introduces artifacts from a range of residential compounds that exhibit aspects of daily and ceremonial Teotihuacan life as well as the lives of outsiders from all over Mesoamerica living there too.

The exhibition also includes artifacts from the de Young’s 1993 “Teotihuacan: Art from the City of the Gods” exhibit, as well as never-before-seen pieces that have been found recently.

“First and foremost, the new discoveries that came out of Sergio Gomez’s under the Ciudadela [are some of the iconic pieces on display],” said David M. Carballo,  specialist in Mesoamerican Archaeology and Associate Professor of Archaeology at Boston University. “This is the first time that they’re being displayed anywhere and they’re just exceptional.”

The following galleries are dedicated to the Feathered Serpent Pyramid and Ciudadela surrounding it; the Sun Pyramid, which rises to a height of 206 feet and is one of the largest and grandest structures built in the ancient world around 200 CE; and the Moon Pyramid, which is the city’s second-largest structure that rises at about 141 feet.

Día de los Muertos and the chance to resurrect from grief

The exhibition ends at the gallery dedicated to compound of Xalla, a site dedicated for Teotihuacan’s ruling elite. The compound at Xalla is significant because the artifacts that were discovered convey a violent end that signals the collapse of the City of Gods.

As for Gomez, the Mexican archaeologist is excited that his work has lead to an important discovery.

“It took me five years to plan out the excavation of the tunnel,” said Gomez. “I can tell you that it’s probably one of the most important experiences of my professional and personal life that I have ever had.”

The experience will hit home for many who see the exhibition at the de Young.

“Reliving this, I can still remember when I was a child waking up to the freshness of Teotihuacan when I lived there,” said Juan Carlos Galicia, a Multiple Sclerosis patient who sits in a wheelchair, reminiscing of his childhood when his father, Lucio Oliva, went off to work. Oliva oversaw maintenance personnel and security, making sure anyone who wasn’t an anthropologist was not at the site. “Those were the best years of my life.”

“What I want the community to understand is that Teotihuacan was a city like every other city in the ancient world,” said Matthew H. Robb, exhibition curator and chief curator at Fowler Museum at UCLA. “It was like a city that we all live in today. But it was a city that was unique to the Americas and it was an indigenous expression of urbanism in the Americas that’s worth analyzing—that’s worth studying to understand how they solved their problems in their time and that we can think about solving some of the problems in your time.”