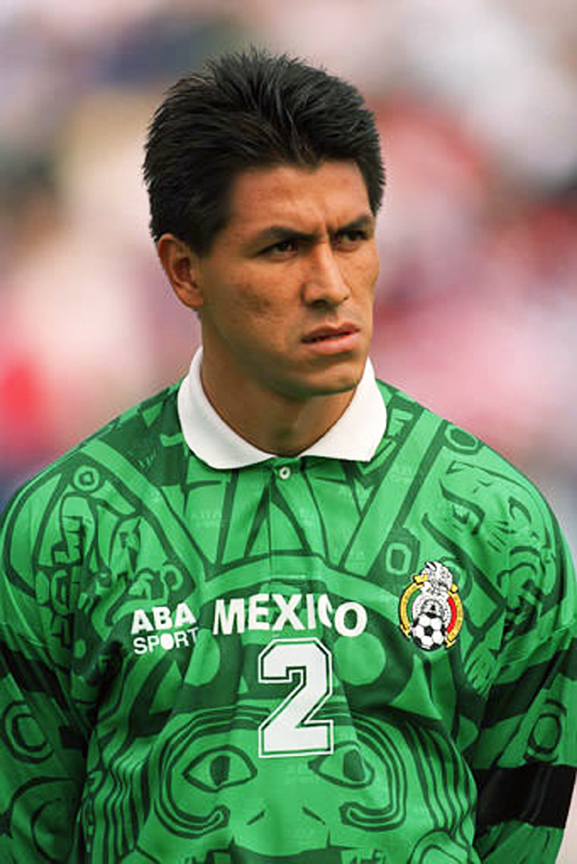 Claudio “El Emperador” Suarez was ecstatic as he was inducted into the Mexican Soccer Hall of Fame on Nov. 8.

“I am very happy to be in Mexico City,” Suarez told El Tecolote via phone. “Because once you’re here you realize what it means to be immortalized.”

Along with Rafael Marquez, who’s still active, Suarez, 47, is viewed as one of the most gifted defenders the Mexican national soccer team has ever produced. He is a veteran who has participated in three FIFA World Cups: USA 1994, France 1998 and Germany 2006.

“It really was a very emotional moment for me to play in the 1994 World Cup,” he recalled. “I started to cry because I couldn’t believe I had made it this far in my career, and because I believe it’s every child’s dream to play in a World Cup.”

Suarez holds the record in Mexico for 177 caps (or starting appearances) with “El Tri,” which is also the third highest in international football. (In first and second places are two Egyptian players Ahmed Hassan, 184 and Hossam Hassan, 178, according to FIFA records.)

Having started in 177 games with Mexico, Suarez scored a total of six goals, while playing against world-class players such as Argentina’s Gabriel Batistuta, Italy’s Roberto Baggio, Germany’s Jürgen Klinsmann, and Brazilians Ronaldo Lima and Ronaldinho.

“When you play against those players you don’t have the space to commit errors,” Suarez said. “Gabriel Batistuta was an overwhelming and strong player; he had a very vehement change of pace. Those type of players can be considered monsters in football.”

Suarez also played in five Copa Americas, including Mexico’s inaugural invite in 1993, where the team ultimately lost 2-1 in the final against Argentina.

And he was captain of the only national team to win an international tournament (when Mexico defeated Brazil 4-3 in the 1999 Confederations Cup).

Suarez was born in Texcoco, Mexico, as one of nine children. His family lived in a small-overcrowded two-bedroom home. Life was hard.

“I had to live a very difficult childhood due to economic problems,” said Suarez. “But since we [my brothers and I] were kids we didn’t realize the situation.”

Despite the family’s financial hardship, Suarez found solace in a flat soccer ball, his brother’s passed-down oversized cleats and a dirt soccer field. He spent countless hours playing soccer on that dirt patch, forever changing the direction his life.

Suarez’s parents—Francisca and Vicente Suarez—always worked to give Claudio and his eight brothers a better life. His mother sold clothes and father worked as street vendor selling “antojitos,” or Mexican snacks.

When he was a boy, his mother was seriously injured at work, after she slipped from a ladder. The impact was so damaging that she almost lost her foot. Claudio and his oldest brother Sergio used soccer to cope with their mother’s injury.

As Claudio grew, so did his desire to play professionally, which led to him and his brother trying out for Club Pumas. The two flourished, but financial woes once again put Claudio’s dream on hold.

“We didn’t have [bus fare] to pay for passes,” said Suarez. “It would take us two to three hours from Texcoco to University City, and we had to take four buses there and back.”

At age 18, he decided to try out for Club Pumas again. This time, with better financial backing, he was able to stay.

The road to the pros is a difficult one Suarez said.

“There were thousands of players that had the desire to play professional, but you must have the discipline and the willingness,” he said.

His commitment, patience and hard work pushed him all the way to the first division of Mexican soccer, where he debuted for Pumas in 1988 and won his first championship three years later. El Emperador won another championship with Guadalajara in the summer of 1997 and was a runner-up twice in 2001 and 2003 with Tigres.

Suarez then moved to Major League Soccer (MLS) to play for Chivas USA from 2006 to 2009, where he retired scoring a total of nine goals and was Chivas USA’s defender of the year two years in a row, according to MLS records.

Suarez currently lives in Southern California with his wife Irma, his two daughters Sandra and Maria and his son Claudio Jr. He currently works with Fox Deportes as a commentator and soccer analyst and occasionally works with soccer clubs in Los Angeles.

“My dream would be to one day serve as the coach of the Mexican national soccer team,” Suarez said. “And hopefully take them to a world cup final.”