Starting this month, Shaping San Francisco brings you histories collected in our digital archive, Foundsf.org. Co-directors Chris Carlsson and LisaRuth Elliott present short pieces highlighting events chronicled in the archive that have shaped the Mission District over the past decades. 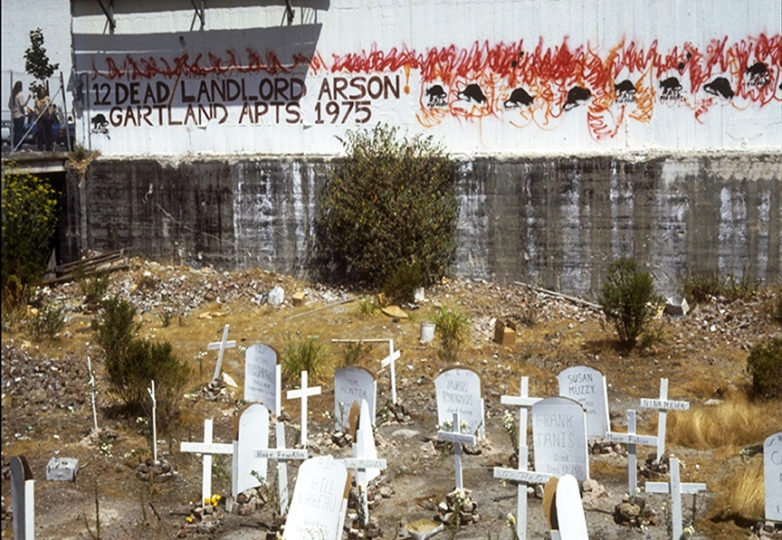 Memorial to deceased tenants of the Gartland Apartments in the “Gartland Pit,” photographed circa 1983. Photo: Susan Greene 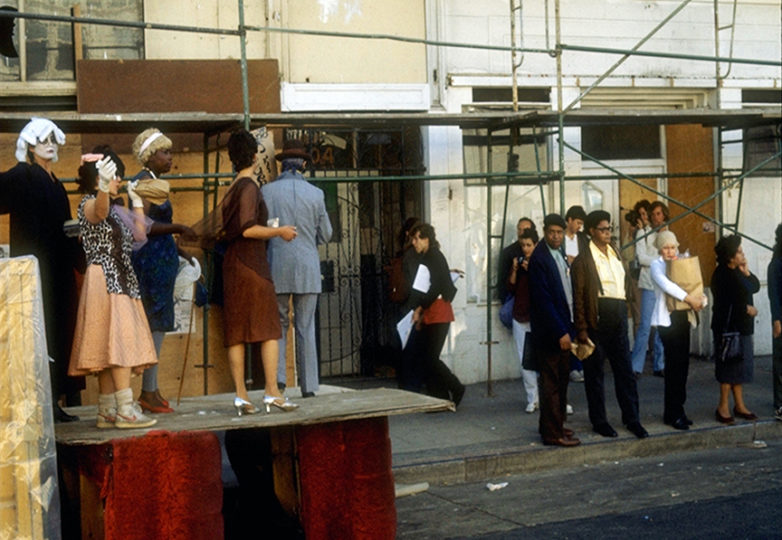 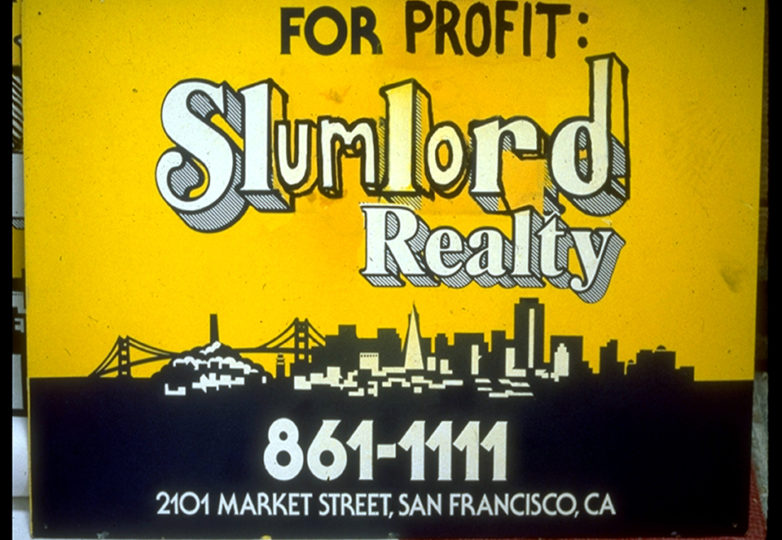 Altered billboard and graffiti at the site of the Gartland Apartments taken circa 1983, speaking to the suspected arson. Photo: Susan Greene 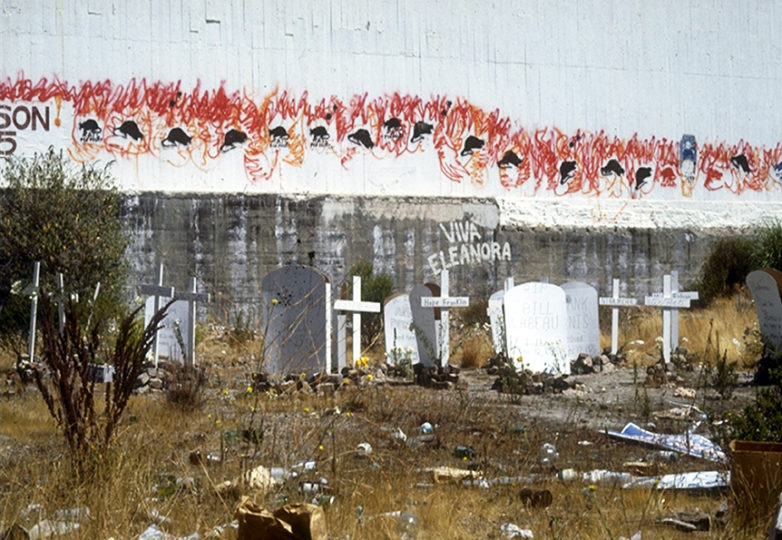 Memorial to deceased tenants of the Gartland Apartments in the “Gartland Pit,” photographed circa 1983. Photo: Susan Greene

Fires at 22nd and Mission streets and on Mission Street near 30th Street in recent years have left empty lots as lasting scars. Along with many other sites that have burned, they underscore the fragility of our wooden neighborhood, and lay bare the callous ease with which fire can be used to displace long-time, low-income tenants.

In late June 1983, the northeast corner of 16th and Valencia streets, too, was a vacant lot plunging down one floor below street level. Eight years earlier, in December of 1975, an arsonist had torched the Gartland Apartments, demolishing the building and murdering 13 to 25 people (depending on who you ask). The owner, Beatrice Presant, had purchased it along with several other derelict properties in the late 1950s, and at the time of the fire was near the end of her life. The Gartland had at least six fires in the year before its final demise and had been cited repeatedly for code violations, none of which had been remediated. Instead of being held accountable for the deplorable conditions and death of San Franciscans in her property, Presant’s lawyer, Charles O. Morgan (law partner to the then-Mayor George Moscone), convinced the press and the public that she was an unwitting victim as much as the two dozen dead.

At the time of the “Gartland Pit,” the North Mission around 16th and Valencia streets was rather different than it is today. Across the street was Esta Noche, at Rondel Place, famously holding it down as the crossdressing and gender-bending mecca for gay/trans Latinx and their admirers. The Roxie Theater showed a variety of art and foreign films, much as it still does, but was then a for-profit theater. Café Picaro had only been open for a short time. The rest of the restaurants, bars, and boutiques in the area were still years in the future.

In 1983, Reverend Floyd Andrews of the Christian Spiritualist Church of America proposed to build a drug and alcohol recovery facility for women in the place where the Gartland once stood, continuing his well-documented business of exploiting welfare recipients for their checks while “employing” them in his church-related activities. In an attempt to block the Reverend’s plans to fill the hole at 16th and Valencia streets, and to remind everyone what had happened there, a group of Mission District artists, students, filmmakers, musicians, poets and radicals known as the “Urban Rats,” carried out a series of onsite billboard alterations. They also launched large-format graffiti efforts, and built and maintained a makeshift cemetery in the Gartland Pit, highlighting the unsolved murders of the former tenants of the hotel.

The Urban Rats had already cut their teeth with numerous actions over the previous years, protesting Reagan’s wars in Central America, protesting Dianne Feinstein’s re-election and satirizing her scapegoating public campaign against Muni fare evaders, confronting a banquet for Reagan and the Queen of England in Golden Gate Park with 20-foot-high effigies, showing films on the sides of buildings and at punk rock venues, and much more.

On June 20, 1983, the Urban Rats set up a stage on the southwest corner of 16th and Valencia and staged a “passion play” called “The Life and Crimes of Reverend Floyd,” which dramatized his goal to start a sweatshop where he would hold women with drug and alcohol problems in exchange for room, board and slave labor. Leading a group of 75 people, they marched to his church on Dolores Street, and though they did not gain entry, their efforts were key to the failure of Andrews to win approval for his plans.

Mostly neighborhood-based artists, the Urban Rats were not unconscious of their own role in the early stages of gentrification. As member Susan Greene said it:

Many of our group were middle class, white artists, activists and intellectuals, and were thus, in spite of ourselves, part of the first cutting edges of the gentrification of the Mission. Everyone knows that murals also raise property values. Now most of us can barely afford to live in San Francisco, and cannot afford to live in the Mission.

The Maria Alicia Apartments, slated to be low-income housing, broke ground in 1987, and continues to operate as such. In the 35 years since the Gartland burned, arson still operates as a tool of displacement. A recent film by Mission District residents, The Other Barrio, is based on the story of the Gartland Fire.