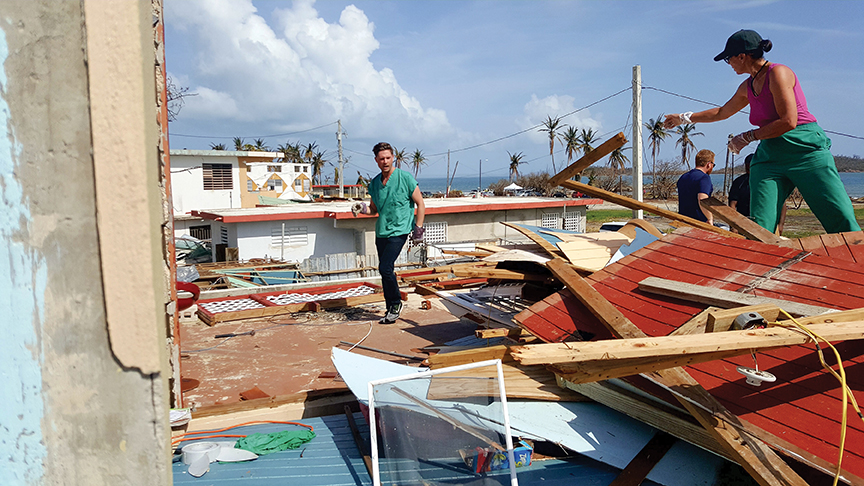 A group of 50 registered nurses from across the United States, who traveled to Puerto Rico in the aftermath of Hurricane Maria to volunteer, are now raising awareness over the lack of federal aid going to the island.

These nurses, like Erin Carrera from UCSF, are part of the Registered Nurse Response Network (RNRN), a 12-year-old disaster relief program sponsored by National Nurses United (NNU), the largest organization of registered nurses in the United States.

“Not only are people in need of medicine and shelter, but they need food and water, something that first responders should have taken care of,” Carrera said. “Some people told us we were the first to offer help.”

Following  an Oct. 3 visit to the island by President Trump where the president insisted that the then official death toll of 16 was proof that Hurricane Maria didn’t qualify as a “real catastrophe,” the NNU sent a letter to Congress on Oct. 11. The letter asked Congress “to exercise its oversight authority to ensure the expeditious functioning and efficacy of FEMA and other U.S. relief efforts on the ground” to prevent further public health issues in Puerto Rico.

“What our nurses witnessed daily is the harsh reality of a woefully inadequate government response and the brutal, inhumane impact on the Puerto Rican people. The Trump Administration, FEMA [Federal Emergency Management Agency], and Congress must act immediately,” Bonnie Castillo, a registered nurse and director of RNRN, said in a statement.

For two weeks, members of a group called “Team 4 Rogue”—which included Carrera and Alfredo Ayala, a physician in Puerto Rico—assisted Puerto Ricans on the outskirts of San Juan, many living in isolated areas who haven’t been aided by the U.S. government’s relief effort.

In the time Carrera was on the island, she witnessed people suffering from infected wounds and life threatening conditions from untreated diabetes and other illnesses. She can vividly remember walking into a flooded family home. Mold covered the walls, and clothes were scattered atop living room furniture in hopes that it would dry. The ceiling to that living room was blown off.

“Our island has been destroyed on so many levels but our spirit remains strong,” Ayala said. “Since Team 4 Rogue left the island, I have started a nonprofit, The Rogue United Corp., to continue the work. We are volunteer doctors, nurses, social workers, mental health counselors and many more. Every day we are bringing much needed water, food, medicine, diapers, water filters and even some toys to communities who need aid.”

Ayala and his new group of volunteers are not charging for their services, but are collecting donations that will be used to purchase supplies for distribution through their GoFundMe webpage.

The returning nurses state that the ineffective federal response has led to deadly conditions. They are also asking the federal government to supply technology and programs to support Puerto Rico in hospitals, create forms of temporary telecommunications in needed areas, deploy boots to help with construction, and to deliver humanitarian aid with immediate eligibility for Medicaid.

“The people over here in Puerto Rico are dying. We have a healthcare crisis right now,” said NNU Vice President Cathy Kennedy. “Nurses have been going out into communities, where all they ask for is water and food. And when you have to make a decision of who’s going to get the food today or the water — we shouldn’t have to do that. The United States is the richest country in the world; Puerto Rico is part of the United States.”

More than 215,000 people have left Puerto Rico for the Florida mainland since the state began counting, according to several news reports, and number is expected to climb to an estimated 470,000 over the next two years.

As of now the official death toll sits at 55, but investigators and several media outlets are reporting much higher numbers. Researchers at Penn State think the death toll may be more than 20 times the government’s count. Alexis Santos, who is the director for the applied demography graduate program and Puerto Rican, and epidemiologist Jeffrey Howard have calculated more than 1,000 death linked to the hurricane.