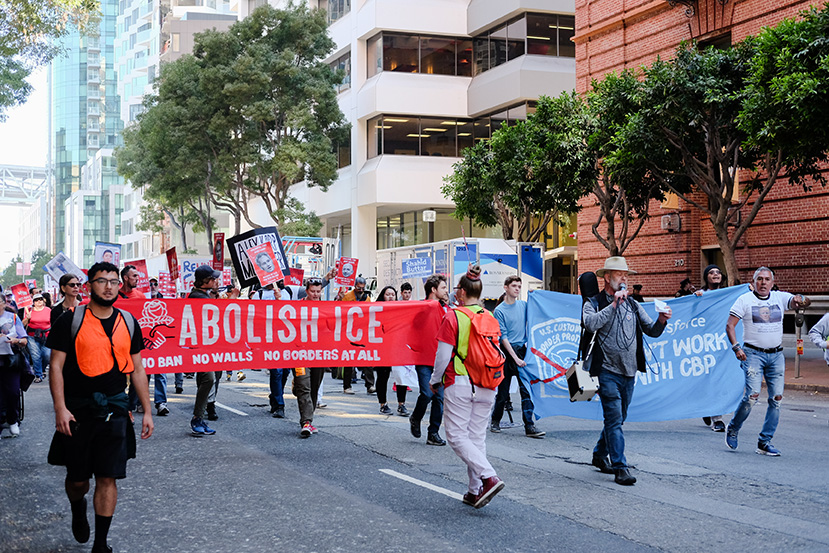 Under the shade of Cupid’s Span in Rincon Park local social justice organizations and their supporters gathered. The Coalition to Close the Concentration Camps (CCCC) hosted the assembly to commence the walk of shame tour for San Francisco’s tech giants. Many held red picket signs with the faces of Jeff Bezos, CEO of Amazon, Sundar Pichai, Google’s CEO and Salesforce’s CEO Marc Benioff.

Near the Embarcadero are the offices inside of leading tech corporations. They’re homed in tall buildings that outlook the panoramic Bay.

Amazon, Google and Salesforce thrive in the city known for liberal and progressive views. Their technology influence is universal, but most importantly is its impact here in the U.S. All three tech giants have government contracts with Immigration and Customs Enforcement (ICE) and Customs and Border Protection (CBP) to use their respective software systems. Community organizers and activists conducted the walk on Oct. 14, with the support of some tech employees who opposed the use of their work for profiting off of the separation of families at the border. In honor of Indigenous Peoples Day, they marched through downtown to demand these entities end their contracts with the Trump Administration’s government.

Before the walk, acknowledgment to the land was paid to honor the Indigenous nations that still reside on occupied Ramaytush Ohlone territories. Members of diverse organizations spoke about the continued struggle for social justice in immigrant and Indigenous communities. Maria De Los Angeles, representing Mujeres Unidas Y Activas, was one of several supporters who spoke out against the corporations.

“These corporations have the opportunity to change so these places can no longer exist because they create suffering for innocent children that simply want to be with their parents,” De Los Angeles said through a microphone.

The collective coalitions marched in unison as traffic was stopped to clear the streets for advocates. “Say it loud, say it clear, shame on prison profiteers!” the collective groups echoed through downtown while displaying a giant red banner that read ABOLISH ICE.

The first stop of the demonstration was Google’s downtown offices. Employees of the search engine spoke outside denouncing the company’s gains from the humanitarian crisis at the southern border. Some of these workers signed a petition rejecting Google’s partnership with U.S. Citizenship and Immigration Services (USCIS) before the public was made aware. USCIS uses Google Cloud service, and for fear of retaliation, one Google employee spoke on the condition of anonymity.

“The responsibility lies with us as the workers,” said the Google employee. “We must organize and take power from the bottom and hold the leaders accountable and that’s the only way that we can have any kind of moral society.”

Tech workers have found it difficult to voice dissent against the powerful corporations they serve. Most of these corporations don’t have unions that will protect their employment. The group Tech Workers Coalition is changing the way people perceive tech personnel and is building up their power from the inside. Greg McGarry, a former tech worker turned Mission High School teacher, attested his support to the many staffers of tech corporations working in fear.

“This is an existential fight for all of us, but it’s just part of the struggle,” McGarry, 36, said. “I understand that economic precarity forces people to make a lot of these moral concessions that they wouldn’t normally make.”

After announcing Google’s association with detention and deportation of children, members marched on the corporation’s headquarters and taped a list of demands for the company. The scolding persisted a few blocks down to Amazon’s building. There, SFPD officers were standing guard on the sidewalk before its doors. An encouraged crowd gained heartened passers by to join their march to Salesforces. In the presence of the Salesforce offices next to the Ferry building, protestors shared Benioff’s cell phone number to call the CEO. Many left voicemails demanding Benioff cut ties with CBP.

Police followed and escorted activists to their final destination, San Francisco’s ICE headquarters at 630 Sansome Street. City barricades were placed on the sidewalk of the building in anticipation of the demonstrators. The end of the line brought concerned citizens to partake in an outpouring of emotions and thoughts on the issue. Dr. Hae Min Cho, a co-chair of electoral for the Democratic Socialists of America and Progressive Democrats of America, walked the 1.5 miles to publicly shame these tech conglomerates.

“They can no longer pretend that they are progressive or liberal when their technologies are enabling the the torture and the dissolution of families and in many cases, the death of people,” Cho said.