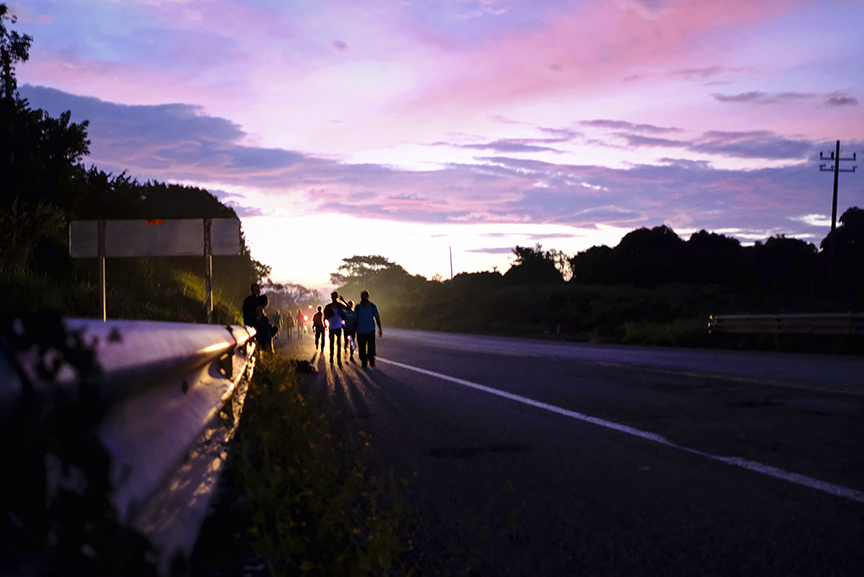 Pueblo sin Fronteras is an immigrant rights organization that has been guiding Central American migrants for years, assisting them not only with accompaniment, but also with legal processes. The group has collaborated with people all over the United States and Tijuana to aid the Caminata del Migrante, working in a horizontal fashion based on the needs of the caravan.

“We make sure their rights are respected and want to let them know we are here with them figuratively and literally,” said PJ Podesta, one of Pueblo sin Fronteras’ organizers in San Francisco.

But Podesta noted that current conditions have exceeded capacity, so Pueblo sin Fronteras is asking others to pitch in.

“We could benefit from legal teams who can offer free services, people with a background in immigration law, and people who can commit to hosting folks who are released from detention,” he said. “Many people won’t know where to go or have a phone to use to call their loved ones.”

Pueblo sin Fronteras is also seeking to reclaim the migrant narrative and counter the dangerous rhetoric coming out of Washington.

“Trump’s rhetoric that they are seeking an illegitimate asylum, they’re narcos, traffickers or that they’re going to overwhelm the system is just to rile up his supporters,” said Podesta. “Most of them are Honduran families.”

“Many people are not aware of what they’re facing when they reach the U.S., how they can be detained and not given a bond for six months, that they’re children could be taken from them,” Podesta continued. “Before they get to the border, we try to connect them with attorneys in Mexico. They need legal orientation to know their rights and line up all the possible plans that are available. It is import to have people know about those processes. The system is going to be brutal. It is designed to be punishing. They need to be able to navigate what is going to happen, when they are released from detention and achieving asylum.”

For those looking to help, Podesta offered some suggestions.

“One way to plug in is by actually going down there to be with them. The caravan is organized, but people who know the route can be helpful, there is also a lot more safety in numbers. Go and be a body, be an international observer. We have local people who have went down there to be involved, people in human rights, paralegals, lawyers, we have grab bag of sources to pull from.”

Pueblos Sin Fronteras also has an ongoing fundraiser at bit.ly/caravansupport. All donations are tax deductible and proceeds go directly to efforts to assist caravan members via Freedom for Immigrants, a 501(c)(3) nonprofit organization.

“The donations help us have spaces to mobilize, banners, materials for the legal orientation, and emergency funds,” Podesta said. “We have fundraisers to raise money for shelter and materials like handouts.”

And finally, to volunteer professional services you can email them at: refugeecarvan@gmail.com