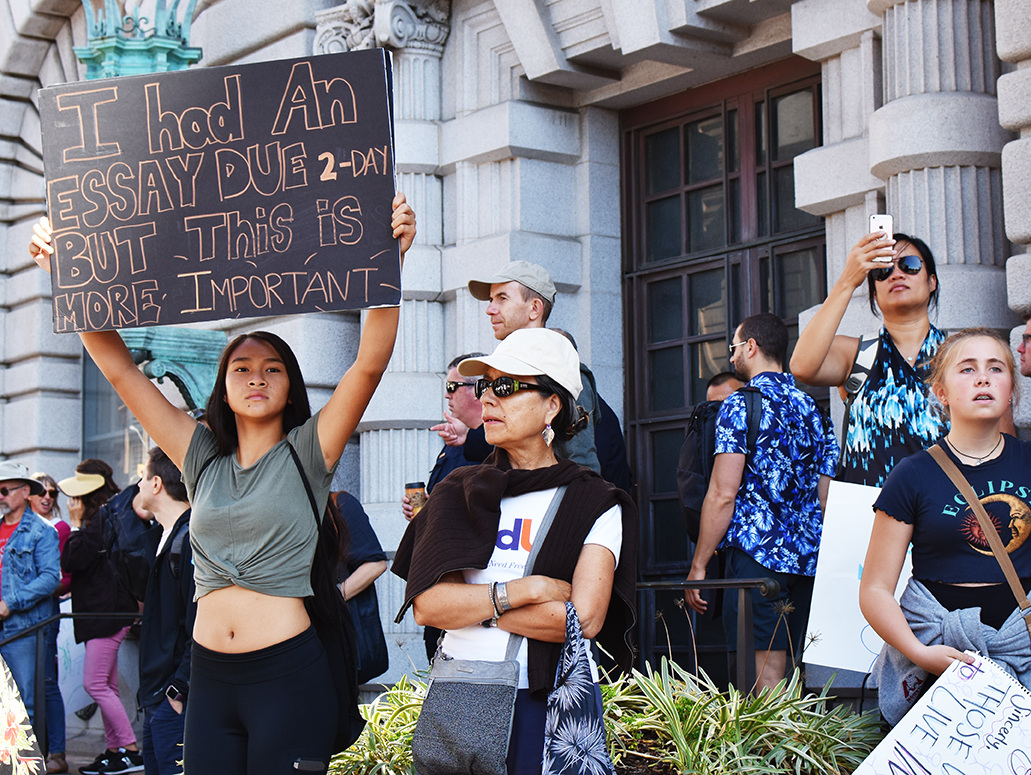 Thousands of students from across the Bay Area gathered in front of Nancy Pelosi’s San Francisco office Sept. 20, joining millions of other youth around the world in a coordinated “strike” against global inaction in the face of climate change.

Students of all ages showed up despite the regularly scheduled school day to make a statement about the fear and anxiety that plagues them daily knowing that their generation will feel the brunt of climate change. This sentiment was epitomized by the large, yellow banners that were carried in the front of the crowd advocating for several demands to improve efforts in combating climate change including policy based on science, equal rights for all and asylum for people displaced by climate change.

Genevieve Saechow, a 15-year-old student from Oakland High School, held a sign that read, “I Had An Essay Due 2-Day But This Is More Important” in front of Pelosi’s office building on 7th Street. Saechow wants to know that her future is secure and that she is not left to deal with the life-threatening issues that climate change brings.

“I would like to see them [the government] trying to use less gas or something,” Saechow said, adding that to see a better system for dealing with  garbage.

Berkeley High students Delilah Whitaker and Elizabeth Glimme walked along with the crowd passing out small flyers with a list of targets and chants for the strike from Youth vs. Apocalypse. Whitaker feels that the government is not doing nearly enough in response to climate change and that the United States needs to depend less on coal as a source of energy. According to Whitaker and Glimme, as a signal of support, Berkeley Unified School District is allowing the students to clear the absences from attending the march.

Some schools made it a point to have students get involved by having their classes declare this a field trip. Eighth grader Rachel Avalos, 13, came to the march with her class from Bancroft Middle School in San Leandro. She stated that her and a group of students from her school, called the Earth Team, created the opportunity to come down by announcing that attending the strike would be a field trip.

“I want to do something good for the world because right now we’re losing our environment,” said Avalos. “And all the animals we should be protecting are dying out. The ice is melting, the sea levels are rising, which isn’t okay, and nobody is doing anything about it. So if we don’t do something about it now, there will be major consequences.”

The march took a few twists and turns through city streets as it charged through notable locations such as the Salesforce campus and the U.S. Citizenship and Immigration Services building. The march ended at the Embarcadero in front of the Ferry Building with many participants taking rest at Sue Bierman park.

Throughout much of the march a cart topped with buckets filled with rust brown paint rolled along the sidewalks. Members of the march were using large brushes to paint the streets with a line showing the path of the march. One of the painters was student Nico Estilo of Oakland Tech.

Estilo, who is a senior, is advocating heavily for progressive reform to solve climate change as he believes the world is dying and therefore he and his generation do not have a secure future. He would like to see the government find and implement new sources of renewable energy. Additionally, he’d like to see corporations make a sincere effort in becoming more sustainable as he says many have become the biggest contributors to climate change.

Estilo’s environmental science teacher at Oakland Tech emphasized this topic and urged him to go to the march. Estilo said that a couple of his teachers are advocates for combating climate change and supported him attending the march.

Other major U.S. cities like Washington D.C., Los Angeles and New York City held their own respective youth rallies. Other countries with students in the streets included Australia, Thailand and Guatemala, to name a few. Multiple sources are reporting numbers between three and four million participants globally.

Swedish environmental activist Greta Thunberg, who is at the forefront of this movement, has become the rallying voice for students across the world to demand change from their governments. At 16, Thunberg sailed from England to New York in a zero-emissions yacht to attend the Youth Climate Summit at the United Nations headquarters in New York City on Sept. 23. Thunberg participated in the NYC strike that marched to Battery Park. In San Francisco, multiple protesters held signs and banners with Thunberg’s face with messages expressing dissatisfaction with how the United States government is responding to climate change.

During the UN Climate Action Summit on Sept. 23, Thunberg along with 15 other youth filed a complaint with the U.N. citing that five of the world’s largest economies—Germany, France, Brazil, Argentina and Turkey—have violated their human rights. Actions related to the climate strike will continue through Sept. 27.