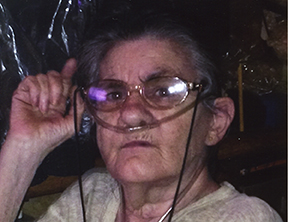 Rita Bernadette Cunningham Serravalli Howard, who despite her small stature was feisty as hell, died on Feb. 17 in San Francisco after a long battle with illness. She was 71.

Described by her longtime partner, M.P.R. Howard, as the “runt” of her family, Rita was born in the rough Manhattan neighborhood of Hell’s Kitchen and was raised in Queens.

“You learned to handle things yourself. You only survived by being a little bit meaner and a little more cantankerous than the next guy,” said Howard of Rita. “The joke in the family is dynamite always comes in small packages.

Rita met her partner Howard in 1976 in Southbridge, Massachusetts, and became roommates in a housing project. The two were married in 1981 in Colorado, and moved to the Mission in 1982.

They were legally married for 35 years, but were together for 40, living together for the first five years of their relationship, “to see if they could stand each other under the same roof.”

After moving to the Mission, Rita and Howard lived and worked at the Hotel Royan for 10 years. Rita worked as a maid custodian while Howard served as the hotel’s graveyard shift clerk.

The couple left the hotel in 1991, with Rita going to work as a custodian at the University of California, San Francisco, and Howard working at El Tecolote as a photographer. Rita worked at UCSF for 20 years, and was diagnosed two years ago with the illness that claimed her life.

Born hearing impaired, Rita was completely deaf in one ear and 95 percent deaf in the other. With the New York City school system refusing to teach American Sign Language to hearing-impaired students, Rita became proficient in lip reading.

Despite weighing roughly 95 pounds in her prime, Rita was cantankerous. “She took no shit from anybody,” Howard said.

That mean streak flared more than a few times. Once when Rita briefly worked at the YMCA on Golden Gate Avenue, she kneed a man in the groin after he wouldn’t stop pestering her for money, according to Howard. A separate time, she did the same to a pimp who had tried to recruit her.

Rita also had a knack for arguing, something that Howard will miss.

“We would argue about everything, including what to have for dinner,” Howard said. “Like I said, she was a tough old bird.”

Donations for the Rita B. Howard Memorial Fund can be made at Bank of the West, located at 2812 Mission St. For information on pending memorial services, please contact M.P.R. Howard at 415-206-9958 .