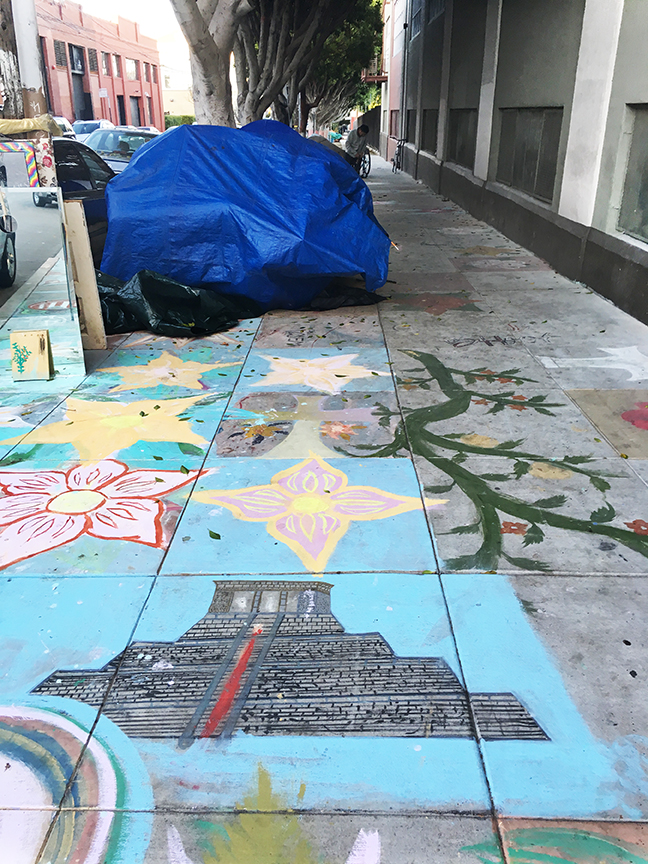 The homeless encampment at 19th and Shotwell streets isn’t like any other in San Francisco. Colorful art depicting hearts, a peace sign and a Mayan temple have transformed the cold concrete sidewalk into a happy and walking canvas. But beneath the art is the dreadful reality for Javier Antonio Chab Dzul and his buddies: these streets are the only home they have.

Despite that sad reality, Chab Dzul, who is self-taught, finds an oasis of peace and serenity in his art in the midst of his living conditions.

It’s not difficult to find Chab Dzul and his tent-neighbors.  Anyone can spot the art on the street and sidewalks, and once you have, you know they’re nearby.

“I find my painting supplies on the streets,” said Chab Dzul, who has been homeless for more than two years. “I mix the different paints myself to create colors so I can paint and lose myself. That’s the reason why I do this.”

As Chab Dzul kneels down on the sidewalk, he uses his finger to stir white paint in a plastic soda bottle that’s been cut in half. He’s prepping for his next piece of art. The sun is setting, the wind is getting stronger and the afternoon is getting colder.

“I was addicted to cocaine,” Chab Dzul said as he set down the cup of paint and lit a marijuana joint. “I then became addicted to crack and I was on it for about two years. And today, I can use everything all at once. But nowadays, I use marijuana and crystal methamphetamine.”

Pelon, (bald one) what Chab Dzul is called by his street family, wasn’t always homeless. He once worked in restaurant kitchens around the city and even lived comfortably in his apartment in the Tenderloin. However, he lost it all after becoming addicted to drugs.

As he stands quietly outside of his discolored gray layered tent, the rest of his neighbors begin making their way home from a busy day’s worth of hustling.

Pinocchio, Ruso, Primo (all street names), a woman and two other men who asked not to be identified, gather together outside the row of tents near the Fire Station on Folsom street.

They smoke meth as they laugh and talk about their day. Some pedestrians stare at them in disgust and cross the street to avoid walking near them as they pass the pipe. But others stop to offer food, which they happily accept.

Each of them excitedly show off clothes that have been found or bought that day, exchanging and trading items among themselves. One man shows off his sneakers to his girlfriend, who cheers him on.

As they finish the pipe, a man called “Italiano” says from inside his tent in a serious tone: “This street life isn’t a game, man,” as he injects a bloodied syringe full of crack into his bloodstream.

“I’ve seen men who are straight and who are manly who were capable of giving up their ass for sex in exchange for drugs,” Chab Dzul says. “I’ve had my share of experiences. But I’ve always been straight.”

Drugs have been an issue in the encampments. According to SF Homeless Project, from June to November, there were 311 complaints of needles.

The number of people living on the street in San Francisco continues to rise.

The San Francisco Coalition on Homelessness estimates that there could be around 12,000 homeless people, while the Department of Public Health estimates around 10,000.

The youngest member of the encampment, he walks around uneasily, but keeps busy fixing his bicycle chain and those of the others, who own bicycles.

“It’s because of this art [Chab Dzul’s street paintings] that we were found and kicked out of where we were last,” Ruso says, in a frustrated and annoyed voice.

Tempers have flared among the residents of the encampments following last month’s passage of Proposition Q, which bans tents on city sidewalks and authorizes law enforcement to remove people 24 hours after offering shelter.

“Things are a bit tense here,” says Chab Dzul.  “The police gave me a ticket the other day. He wanted me to tear down my tent. I told him, ‘You gave me a ticket already, once I have a ticket, I have the right to stay here for the day.’ He said, ‘Who knows more about my job? You or me?’ So I just left.”

As the night sets, and the temperature hits a low 42 degrees that night, everyone goes inside their tents, to prepare for the next day.

The next week, the encampment was gone.

Homeless encampments are being removed but homeless remain