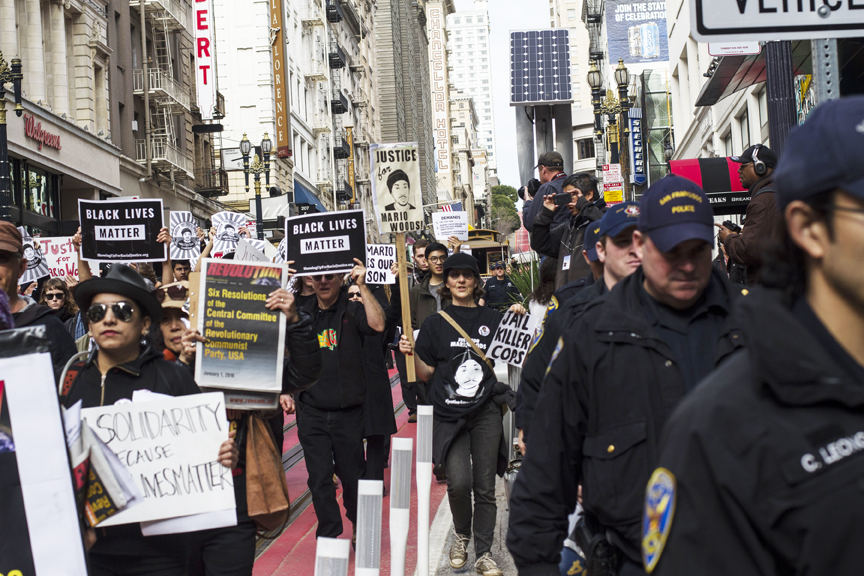 As the Super Bowl festivities kicked off in San Francisco, hundreds of people gathered at Union Square Jan. 30 to demand justice for Mario Woods, the 26-year-old black man who was fatally shot by San Francisco police on Dec. 2, 2015.

Protesters met at Union Square and marched to “Super Bowl City”—the area at Justin Herman Plaza that has been transformed into the commercial home of Super Bowl 50—while chanting “Fire Chief Suhr” and “No justice, no Super Bowl.” However, the demonstrators were met by a barricade of police with batons in hand, asking that they move off the streets and onto the sidewalk once they reached Beale and Market streets.

“Today demonstrates that they can pretend to make a spectacle of a sport and make that more important, but it’s actually the 50th anniversary of the Black Panther party and that’s what we should be talking about, because they are the ones that created liberation,” said protester Magick Altman, 65. “We need to remember who we are as a city. We need to make housing and free healthcare and good education for all the people.”

The Justice 4 Mario Woods Coalition, which led the protest, had three demands for Mayor Ed Lee: that SFPD Chief Greg Suhr be fired; that the officers involved in Woods’ death be charged with murder; and that there be an independent investigation surrounding the Woods case.

“This is a peaceful protest,” said Phelicia Jones, one of the leaders of the Justice 4 Mario Woods Coalition. “We are here to educate the public on how it’s 2016 and a young man was murdered by execution by a firing squad.”

Super Bowl City cost the city approximately $4.8 million to host and entertain Super Bowl fans in the nine days prior to the game, according to a report from the Board of Supervisors Budget & Legislative Analyst. The fan village offers concert stages, sport network centers and eateries.

“(Super Bowl City) is a huge example of the inequality that we are suffering under, that Mario Woods suffered under, where people can spend hundreds if not thousands of dollars for a single ticket and a single sporting event while others freeze in the cold to die,” said Reuben Safire, one of the protesters. “Many homeless people are going to be displaced as result of the action that San Francisco is taking in order to make it a more pristine and beautiful city for all the rich, privileged people to come and enjoy the Super Bowl in their little bubble.”

There are 4,191 unsheltered homeless people (nearly half of the city’s homeless population) in District 6, where Super Bowl City is located, according to the 2015 San Francisco Homeless Count Report.

Despite the protest being held up at Beale and Market streets, police allowed protesters through the barricade after a 30-minute standoff, although the crowd had dwindled to about half its original size by the time it reached Super Bowl City.

“This is a city that refused to recognize the black, the browns, the poor whites, homelessness,” Jones said. “Why should we stand to the side and say nothing?”