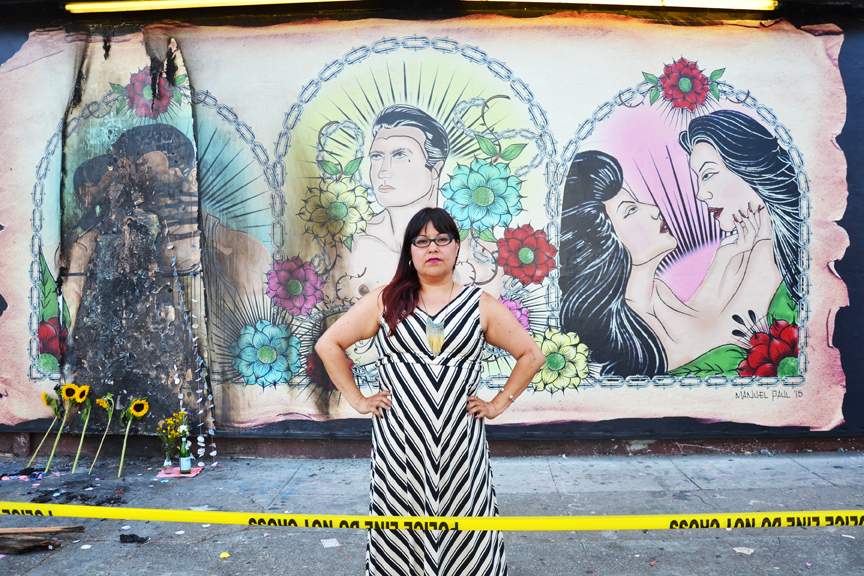 Letter to the editor: Undocumented immigrants not the problem

During one of the most emotionally trying times of Ani Rivera’s tenure as executive director of Galería de la Raza, hundreds of community members rallied to her side July 1, supporting the 45-year-old institution as it copes with an arson attack against its highly publicized Latina/o LGBTQ-themed mural.

The subject of much controversy and threatening attacks via social media, the “Por Vida” mural located at the corner of 24th and Bryant streets was set afire on late June 29, leaving its left-hand side a charred ruin.

A digital mural—meaning transferred from a digital image rather than painted—“Por Vida” was dedicated on June 13 after being commissioned by Galería and completed by artist Manuel Paul of the Los Angeles-based Maricón Collective. It depicted two same-sex couples in lowrider, Latino-style clothing gently embracing, and a third transgender man in the center. The arsonist, who was caught on camera attacking the mural on June 29 at about 11p.m., only destroyed the image of the male couple embracing.

When Rivera arrived around 11:35 p.m., she was met by members of both the San Francisco police and fire departments and tenants who live on the floor above Galería.

“They were so upset,” Rivera said of the tenants. “They were like, ‘We didn’t ask for this.’ And I get it. This is their home.”

Rivera said surveillance footage revealed a neighbor from across the street running toward the mural with a fire extinguisher before firefighters arrived. The arsonist attack marked the third time the mural was defaced.

As of press time, Galería hadn’t decided when it will restore the mural again, saying that its priority now is to ensure the safety of the building and the tenants.

Por Vida became a target of social media threats almost immediately after its dedication on June 13. Perhaps its most outspoken and influential detractor has been a man with the Instagram handle barrio2barrio who, on June 15, wrote that the mural was “disrespectful” and that “we don’t play that up here.” After more inflammatory posts in the following days, barrio2barrio was contacted by various media outlets for an interview, but declined, though his posts reveal he was offering to coach others on how to speak to the media.

Vandals first defaced the mural with red and light blue spray paint on June 16, crossing out the images of the same-sex couples, while leaving the center image of the transgender man untouched. Upon learning it was a transgender man, the vandals returned to cross him out as well.

Supporters of the mural responded by the dozens, some writing from as far as Texas, New Mexico and Arizona, while many helped restore the mural on June 18, peeling off the old vandalized layer before installing another $3,000 panel. 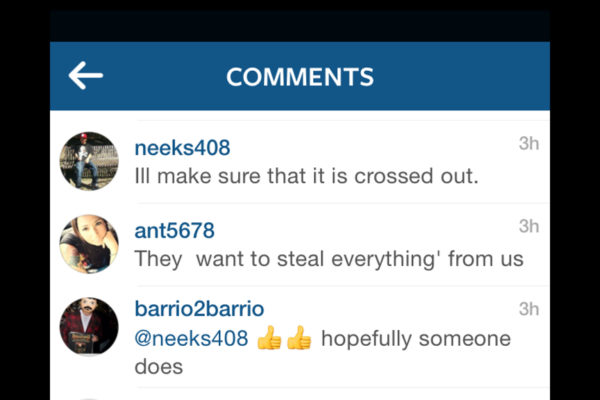 Dozens of comments ensued after barrio2barrio’s first post, most of which were riddled with homophobic slurs, anti-southern California gang rhetoric, and threats to deface the mural. In one of the comments, Instagram user neeks408—whose account is private—wrote “I’ll make sure that it is crossed out,” to which barrio2barrio responded, “hopefully someone does.”

Before the June 29 arson attack, an Instagram user called _gemini07_, who has been vocal about his animosity toward the mural, commented, “the Mission gonna keep tagging that bs till bullet wholes [sic] cover it instead of paint I know alot of homies that ain’t never gonna let this fly…”

“We take that as a direct threat,” Rivera said, noting that she sent images of the post to the San Francisco police detective working the case. 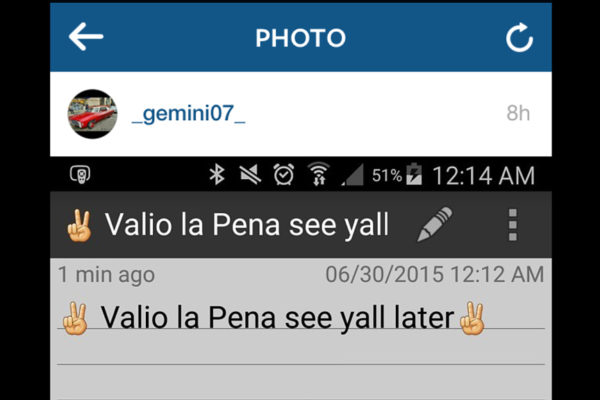 An hour after the mural was set afire, _gemini07_ posted “Valio la Pena see yall later,” which is Spanish for “It was worth it.”

As of press time the arsonist hasn’t been identified.

On June 30, Rivera turned over Galería’s surveillance footage from June 20 and June 29 to the SFPD, cooperating with the department’s active investigation. SFPD spokesperson Albie Esparza confirmed the police are investigating arson, hate crime enhancement and vandalism.

“At the end of the day, we have to call it for what it is: It’s a hate crime,” Rivera said. “It’s based on things they don’t understand. They’re trying to hide behind issues that are justifying their hate.”

The history of Galería’s digital mural

Galería inherited the mural space in 1974, fighting back marketing companies who were trying to peddle beer and cigarette ads there, but has existed in its digital form since the early 1990s.

Rivera, who has been Galería’s executive director for three years but involved with the organization since 2003, called the mural a space to push the envelope for dialogue.

“Whether we agree with it or not, it brings visibility to these issues that are important. And as a community we have to sit with that and understand how we must evolve,” she said. “We’re not arguing whether the homeboys or the groups of the 24th street have or do not have queer folks, we never made that declaration. Our declaration was our commitment and love for oldies and lowrider art, and how it reflected and helped shape a Chicano/queer identity.”

Erick Arguello, president of the Calle 24 Latino Cultural District Council, was surprised the mural was defaced.

“It was a very diverse group of people that attended [the mural’s dedication]. A lot of lowriders were there. We have seen that kind of vandalism in the past, but it’s been such a long time,” Arguello said. “I thought it was something the queer Latino community was creating in establishing itself part of the larger Latino community, where for years it was very invisible, even though gay Latinos are everywhere in the community…in the lowrider Chicano community also.”

The “Por Vida” mural, which is slated for display until the end of July, isn’t the first Galería mural targeted by homophobic attacks. In 2000, Alma Lopez’s “Heaven,” which drew the ire of community homophobes with an image of two women embracing, and a grandmother in the background wearing a look of “ay dios mio” disgust, was vandalized.

Por Vida’s detractors claim the artists who created it don’t properly represent the Mission’s Latino community, and that “gay vatos” have never existed, and that Latino lowrider culture “isn’t gay.”

Some longtime Mission residents, however, dispute that.

“Queer people are just resilient; you know how to navigate in all systems, even in the systems of the hood,” said Vero Majano, a Mission native and artist with Galería’s “The Q Sides” exhibition. Growing up in the early 1980s, Majano recalled the gay Latino club scene on 16th Street and how many gay people in the Mission had to keep their identity on the “DL.” (Down Low)

And apparently some of them were cholos.

“Yes, honey, they always have existed,” said artist Viviana Paredes, a native of East San Jose who used to cruise the Mission in her 1949 black Cadillac. Having lived in the Mission for the last 40 years and being one of the founding members of the Gay Latino Alliance (GALA), Paredes too recalls the gay club scene in the Mission, working as a bartender at both Esta Noche on 16th street and Sophia’s right around the corner on Valencia. There was La India Bonita too on Valencia Street. And the Mexican restaurant La Rondalla—a big gay hangout where a drag queen named Teresita used to sing along with local mariachi.

“A lot of the guys, who are unfortunately not with us, they were all vatos,” Paredes said, sadly recalling the Latino faces in the creased khakis pants and ironed white t-shirts, with the sleeves slightly folded. “When AIDS hit, it just wiped out all of the guys, so many… it was a really hard and sad time. But a lot of those guys were really cholo—in their style, and in their dress.”

Paredes’ brother Conrado was one of those who died of AIDS, but that history doesn’t resonate with some young men on 24th Street.

“One of them [the mural’s detractors] was telling me that they’re not anti-gay, but the problem that they have is depicting the Chicano lowrider community as gay in that image,” Arguello said. “So I understand that part, they identify with something, very unique to them … It’s almost like we’re talking about the same thing. The gay Latino community wants to feel like they belong in their own community and [are] accepted, and [detractors are] fearing that that’s being taken from them.”

“It’s ridiculous for any group of people to think that there’s not gay people within their style, their social clubs,” said Paredes, who was in her early 20s at the height of Anita Bryant’s anti-gay political campaign, when a gay club where she was bartending in San Jose was set on fire while patrons were inside. Luckily, no one was hurt that night either.

“The truth is, we’re used to this. People are always doing something to try to scare us, intimidate us—harm us,” Paredes said. “Look what it does to our community. It only brings us back stronger.”

Galería is looking to host a community discussion, possibly on July 18.