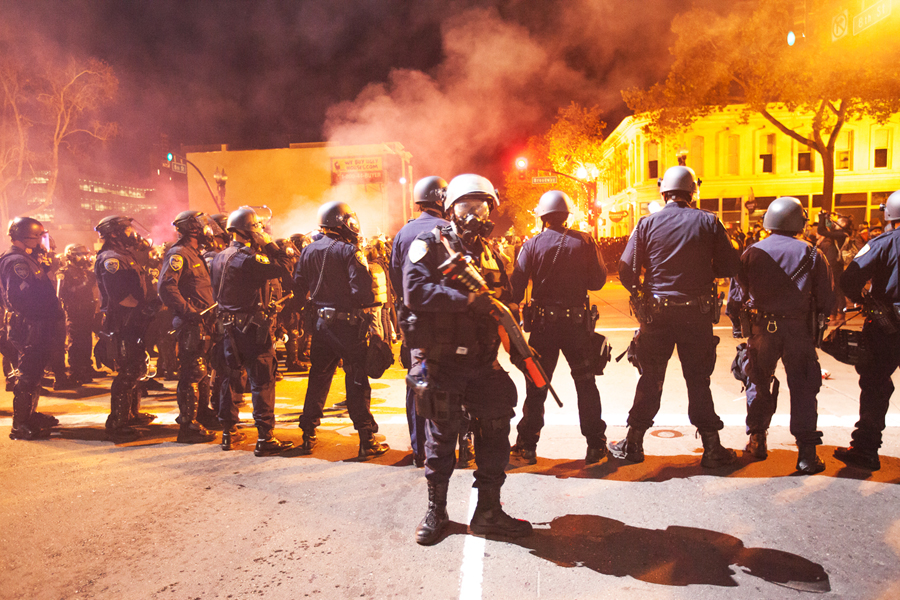 [su_note note_color=”#d8d7d2″]On Nov. 24 a grand jury opted not to indict Darren Wilson, the white Ferguson, Missouri police officer who shot and killed Michael Brown, an unarmed 18-year-old black man on Aug. 9. The verdict spurred countless protests throughout the country, including one in Oakland, a city that has endured its share of officer-involved shootings against unarmed black men. And with the recent news of a Staten Island, New York grand jury voting not to indict the white officer who choked Eric Garner—a black man—to death on video, more demonstrations will surely follow. Here’s the personal account of Santiago Mejia, an El Tecolote staff photographer and editor-in-chief of CCSF’s student newspaper, The Guardsman, on what occurred over those three days of protests in Oakland.[/su_note]

More than 500 protesters rallied Nov. 24 at 8th and Broadway streets in Oakland on a dark, cloudless night. Some were crying, but the majority of them were angry.

The crowd gathered in front of some 300 police officers lined up across Broadway Street. Officers were equipped with riot helmets, gas masks, batons, shields and body armor.

“No justice, no peace,” and “hands up, don’t shoot,” the protesters chanted at officers as debris was set afire a couple of hundred feet from police. A masked man with a spray-paint can tagged “RIP Michael Brown!” on a store window, as another man broke it.

“You will be arrested if you do not leave,” blared one officer through his vehicle’s PA system, as the officers marched their way towards protesters, dodging glass bottles in the process. One officer was pelted on the head. His helmet deflected the blow, but he was immediately removed from the area as he was still shaken up.

An instant bright flash streaked across the Oakland neighborhood as police fired flash-bang grenades at protesters in an attempt to disperse the startled crowd.

Another “bang!” and screams and chaos ensue.

As protesters ran down Broadway Street, officers gave chase and closed in, detaining and arresting protesters on the way.

More “pops” continued to sound as an odorless gas filled the area—tear gas. Some protesters came prepared with gas masks; others did not. The latter group ran away from the eye-irritating gas while covering and rubbing their faces. Some protesters broke in and looted stores for water to rub off the effects of the gas, while others looted the stores for valuable goods.

One man, who was dressed in a military uniform and brandished an American flag, was shot by a rubber bullet and collapsed. His fellow protesters around him helped him back to his feet.

Rubber bullets continued to rain down on protesters for a few moments as tear-gas canisters were thrown again at protesters.

Officers gradually took control of the streets as more and more protesters parted from the main crowd. Firefighters extinguished the several fires started by protesters.

The night ended as protesters continued to disperse until the streets were cleared. By the end of the three days of protesting, various media outlets reported nearly 200 arrests surrounding in the protest. And more are expected.