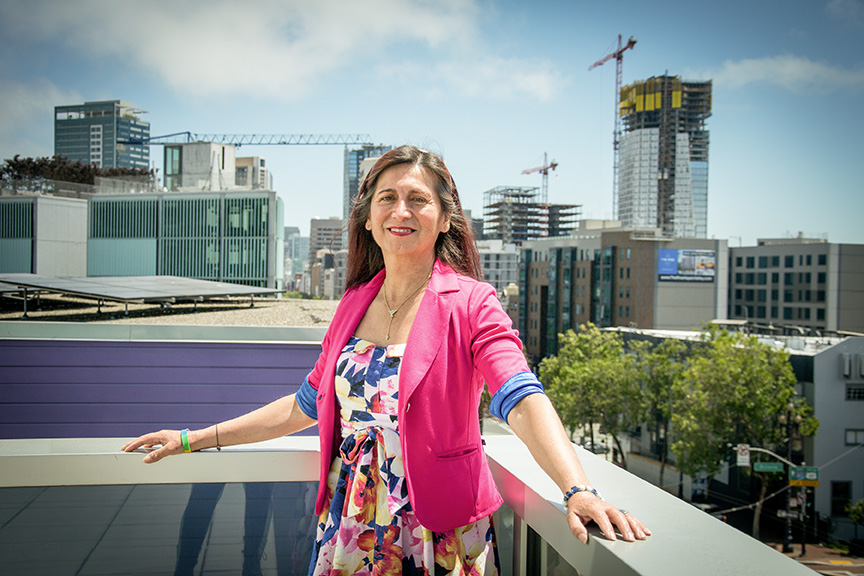 Jump starting a career at any point requires support and guidance, but the necessary resources are often unavailable to people from diverse backgrounds or those who be- long to marginalized groups.

San Francisco’s Office of Transgender Initiatives took on the challenge of addressing some of this systemic inequity this year, launching its Economic Development Fellowship program on Jan. 7. The pilot program specifically aimed to help LGBTQ

immigrants by providing them with tools and resources to fulfill their career goals.

Pau Crego, policy director at the Office of Transgender Initiatives, said they were highly selective when nominating their fellows for the fellowship. He said they wanted to select three candidates who were ready to excel in their career and had the stability to complete the program.

The fellowship, which concluded on May 31, focused on creating a plan that was personalized for each of the fellows individual career goals, and providing them with access to

professional resources. Individualized work plans required the fellows to dedicate a minimum of 16 hours a week, and each of the fellow’s personal goals was vastly different.

The fellows, Denyse Chavez, Isabella Torres and Kendall Fuentes, all successfully completed the 21-week program and expressed their triumphs that were achieved during the fellowship.

Denyse Chavez, a Salvadoran translatina, was born in Departamento De La Libertad, but was raised in the country’s capital of San Salvador. She immigrated to San Francis- co seven years ago after witnessing violence in her hometown for being a transwoman.

“There have been hate crimes based on sexual identity,” said Chavez.

“It is especially difficult in El Salvador to be a transwoman,” said Chavez. “The women don’t have an opportunity to grow and the majority of times, transwomen get into drugs and other crime because the same system stunts their growth.”

According to a study released by the Inter-American Commission of Human Rights, there were an estimated 770 reports of violence against LGBTQ people in Latina America between January 2013 and March 2014, and of those 770 attacks, 594 resulted in deaths. According to the report, the attacks were propelled by “prejudice based on the perception of the sexual orientation or gender identity of the victims.”

When Chavez lived in El Salvador she was involved in a nonprofit called FUNDASIDA (FundacionNacional para la Prevención del VIH/ SIDA), which helped people in the LGBTQ community that are living with HIV and need an outlet to speak about it. During her time there, she worked in the crisis hotline where she helped those who were afraid of living with the diseases. This later encouraged her to take psychology courses and help those infected by HIV to breakdown their own stigmas of the infection and those around them.

Moving to San Francisco gave Chavez the ability to live without fear, which led her to finding a community of people that she could confide in at San Francisco’s LGBTQ Center. Her dream has always been to open a Salvadoran bakery that employs people of the LGBTQ community. Through her fellowship, she has become closer to achieving her goal.

Although Chavez has found peace in San Francisco she still asks herself if she will ever return back to her homeland, but due to the still very prevalent violence that exists in El Salvador against the LGBTQ community, the chances of that happening is very unlikely.

“I am a bit afraid of returning. The thought of returning means that my life could be at risk. I would like to contemplate the idea of returning at some point, but that would mean returning with a lot of fear,” said Chavez.

Isabella Torres, a translatina from Colombia, worked as a successful architect for the city of Bogota and also worked alongside leftist candidate Gustavo Petro during the 2016 Colombian Peace Plebiscite Referendum. During this period, Torres worked as an openly trans Latina architect in Bogota where she built over 3,000 homes throughout the city. She was given full autonomy of new projects in the architectural field, however that stopped once religious right-wing rejected the peace deal. This resulted in Torres being left unprotected and without any job opportunities in Bogota. Soon after she began receiving threats and was treated inhumanely throughout the city streets.

“Suddenly you see a gay or lesbian person and you can’t tell their [LGBTQ] identity, but you can tell what ours is,” said Torres. “I was walking on the streets and they would push me and insult me, they would tell me that I couldn’t enter establishments.”

Torres fell into a deep depression having to endure hate crimes because of her identity. Even before being elected president, Duque helped empower Colombia’s religious and conservative right. Torres believes that this intolerance against Colombia’s LGBTQ community led to her best friend being murdered because of hate. Torres no longer felt safe in Colombia and sought asylum in San Francisco.

Torres has high ambitions for where her career can go in San Francisco, because of her architectural background she hopes contribute ideas to the city’s housing crisis.

“Here in San Francisco, there is a need for housing and I think I can contribute to San Francisco and give them something,” said Torres. “So my objective is to return and restart my career as an architect to help with the housing.”

She is currently in the process of getting her architectural accreditation in the United States and she is attending ESL courses at City College of San Francisco (CCSF).

Kendal Fuentes, a Salvadoran translatina, is an aspiring model looking to change the modeling world. When she realized that her opportunities as a model were limited in El Salvador she made the move to San Francisco.

“El Salvador is not ready for a transgender model,” she said. “But here in the United States, there is that opportunity.”

During her time at the fellowship, she too has been enrolled in ESL courses at CCSF and also worked on producing modeling cards (which are basically business cards of the modeling world, an essential item as most models work as independent contractors)—to further her career in the Bay Area. As a result, she has been able to schedule a number of modeling gigs in the city.

Fuentes’s goal is to use her platform as an LGBTQ model to uplift her community specifically young trans-women.

The Economic Development Fellowship program was fully funded through San Francisco’s Office of Civic Engagement and Immigrant Affairs (OCEIA). Currently, the SF LGBTQ Center is working on putting together the itinerary for next year’s fellow program.

Mayor Breed has already proposed a budget for the upcoming fellowship program, which now needs to get approved by the Board of Supervisors. Once the budget is approved, the Office of Transgender Initiatives will have enough funding to bring on five fellows into their upcoming program.

The next Economic Development Fellowship, will also last 21 weeks and begin in January of 2020.