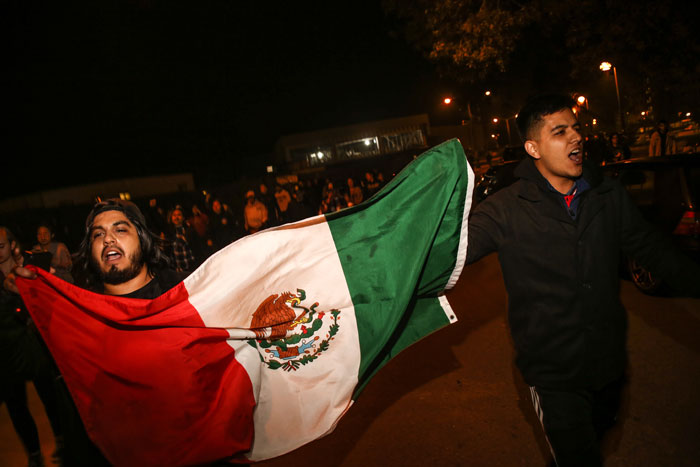 Following a highly abnormal presidential campaign buoyed by fear and outright bigotry, Donald Trump’s victory stunned the nation, but the president elect’s upset win was met swiftly with fierce resistance, in the form of dozens of protests in cities across the country.

In the Bay Area alone, demonstrations at San Francisco State University began as early as election night, while larger protests took root in Oakland and San Francisco on Nov. 9, continuing through the weekend and well into the following week.  Whether organized or spontaneous, all have shared the same tone: these thousands of people refuse to accept as president a man who has openly threatened immigrant communities, communities of color, minority religious communities and women.

“This election is not a reflection of America in general and our view on immigrants,” said Sally Kinoshita, deputy director of the Immigrant Legal Resource Center on Nov. 10, pointing out that it was Hillary Clinton who won the popular vote despite losing the electoral college. “For those of us doing immigrant rights, it feels like a major setback. I think we hold a lot of hope and we want to share that with our immigrant community.”

Sixty-four percent of Trump voters believed immigration to be the most important issue, the New York Times reported, ahead of terrorism, the economy and foreign policy.

Among Trump’s most frequent boasts along the campaign trail were: his “plans” to deport 11 million undocumented immigrants by “rounding ‘em up in a very humane way, in a very nice way”; his vow to build a “big, beautiful, powerful” wall at the U.S.-Mexico border; his promise to repeal the Deferred Action for Childhood Arrivals (DACA) program; and his idea to place a temporary ban on Muslims entering the country.

Will Trump deliver on his threats?

Despite his many media appearances and rhetoric-infused speeches, Trump has yet to provide the specific or even general plans for his promised actions. And now, little more than a week removed from election night, Trump seems to be flip-flopping on some of his most firmly held stances. The 11 million immigrants and their “anchor babies” he promised to target when he began his campaign last year have now been reduced to 3 million, and he has admitted that parts of his “powerful wall” would actually just be fences.

Trump did however appoint to his immigration policy transition team Kansas Secretary of State Kris Kobach, a staunch anti-immigrant conservative who drafted Arizona’s controversial SB 1070 (the “Show me your papers” bill).

“There’s no question the wall is going to get built,” Kobach told Kansas TV station KWCH, days after the election. “The only question is how quickly will it get done and who pays for it.”

Kamal Essaheb, the director of policy and advocacy for the National Immigrant Law Center, disagreed.

“Obviously, there are a lot of problems there. It’s not practical. It’s costly. It’s not even feasible,” Essaheb told El Tecoote on Nov. 10. “So at the end of the day, we just don’t know specifically what he will do.”

Many are afraid that Trump may not only revoke DACA—a temporary legal stay executive action from 2012 that has been granted to more than 700,000 undocumented immigrants—but use its database to track recipients. This would set a historical precedence, as administrative programs like this have never been used as lists to wholesale go after people for deportations.

“It would be extremely costly for the government to go after and try to deport the more than 700,000 people who’ve received DACA,” said Kinoshita, but she did acknowledge that Trump has proved more unpredictable than past president elects.

Trump has also threatened to cut funding to “sanctuary cities,” which would include San Francisco. Mayor Ed Lee earlier this week insisted that San Francisco would remain a safe haven for undocumented immigrants and their families. Los Angeles Police Chief Charlie Beck echoed a similar message. “We are not going to work in conjunction with Homeland Security on deportation efforts,” Beck told the Los Angeles Times. “That is not our job, nor will I make it our job.”

In addition to Kobach, Trump has surrounded himself with an array of controversial people, including former New York City mayor Rudy Giuliani, climate change sceptic Myron Ebell, and the Family Research Council’s Ken Blackwell, who is a proponent of “gay conversion therapy.”

Then there is Stephen Bannon, whom Trump has named as his chief strategist.

Bannon is the executive chairman of Breitbart News, the ethically questionable conservative website that came to prominence by publishing a series of doctored video interviews designed to damage reputations of political opponents, mainly Democrats. More recently Breitbart has served as a home base for the “alt-right,” a loosely defined assortment of reactionaries, white nationalists, men’s rights advocates and Internet trolls who oppose immigrants, feminism and multiculturalism, and who have orchestrated attacks on journalists and members of Muslim and Jewish communities.

Over the last two decades, the immigrant rights movement has been pushing for the idea of federal immigration reform, something that could’ve provided a pathway to citizenship for the 11 million undocumented immigrants in the United States.

“That is a thing of the past. That is certainly not something we should expect, or anything close to it, at the federal level over the coming years,” said Essaheb.

With uncertainty looming ahead, both Essaheb and Kinoshita are preaching preparedness over panic, urging immigrant communities to inform themselves of their rights and programs that can offer protection despite Trump’s threats.

Kinoshita also advised anyone who’s undocumented to go to a reputable legal services provider to be screened to see if they are eligible for any other existing immigration option other than DACA. She urged immigrants to visit the Immigration Advocates Network’s website, which provides many free or low cost services, and to be aware of predatory schemes or notarios

Listening to Trump’s recent statements promising to first target criminal immigrants, Kinoshita also advised for immigrants to stay clear of negative interaction with law enforcement, stating that something like a DUI or a drug conviction can have “irreversible negative immigration consequences.”

“There are other parts of government,” he said. “There are states and cities that have led the way, particularly over the last decade, to meaningfully and tangibly make life better for their residents, including immigrants.”

California Gov. Jerry Brown, for example, signed into law in 2015 a bill allowing immigrants to be eligible to obtain driver licenses. Other laws protect confidentiality policies such as for hospitals, access to higher education and the ability to obtain occupational licenses.

“We definitely have a fight ahead of us, a fight for the rights of immigrants to be here, the fight against the criminalization of immigrants and people of color, a fight for true economic justice,” said Essaheb. “Immigrants, documented or not, will be a critical part of that fight.