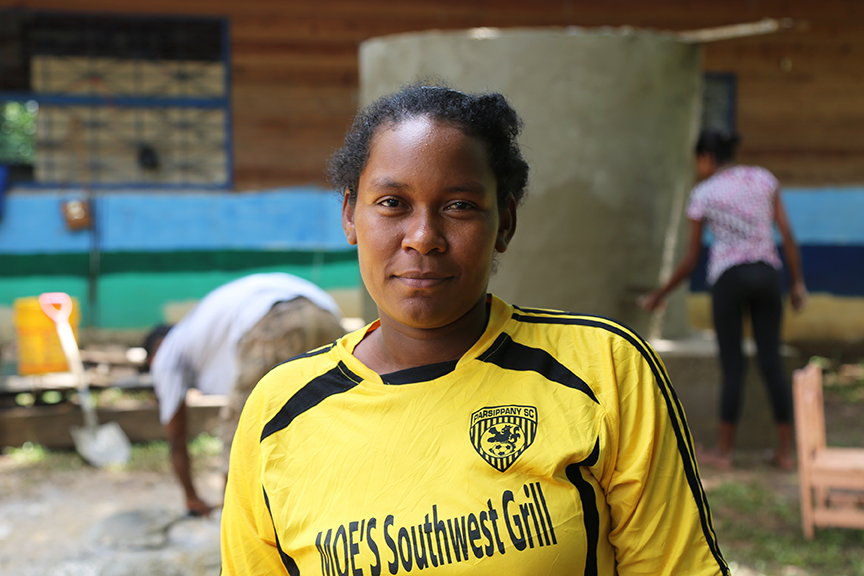 When the men of Wawa Bar—an indigenous Miskitu community located in the remote North Caribbean Coast Autonomous Region (RACCN) of Nicaragua—sized up Shana Zamora Dixon, they doubted she would last.

“There’s a perception in our community that this work is for men,” said Dixon, who began building rainwater harvesting tanks in 2015 as a means of providing clean drinking water to her community. “They questioned my capacity, my aptitude … they said I would only last two or three days.”

But like her Miskitu people, who are regularly targeted by outsiders and profiteers for their natural resources, Dixon has persevered.

A married 25-year-old mother of two, Dixon has lived her whole life in Wawa Bar, which is only accessible by boat. Each day, a single boat departs from Wawa Bar at 5 a.m., bringing passengers to Bilwi, the region’s capital, and doesn’t return until noon. For her interview with El Tecolote, Dixon—who doesn’t speak Spanish but who communicated through an interpreter—travelled to Bilwi. It’s a trek that winds through rivers and lakes and can take anywhere between one and two hours, depending on the weight and passengers of the boat. And it’s the nearest place with a decent enough internet connection.

There are no roads in Wawa Bar. There is little infrastructure or steady work, and only one part-time nurse who can leave for days at a time. The Nicaraguan government, located 220 miles away on the opposite side of the country in the capital of Managua, offers virtually no help to these indigenous communities. And access to clean drinking water is scarce.

Dixon works with WaterAid, an international nonprofit founded in 1981 to provide clean drinking water and sanitation to some of the poorest regions in the world, which began working in Nicaragua’s Caribbean coast in 2011. With the region’s heavy rainfall during rainy seasons, WaterAid embarked on a project to build rainwater harvesting tanks to catch precipitation free of contamination.

“In Miskitu communities, there is not a lot of flow in the economy. And if there is any type of movement, it’s usually coming from the men, whether they be fishermen or farmers,” said Nathalie Fernandes, who works out of the WaterAid offices in both Nicaragua and Colombia. “And the women kind of don’t really have opportunities within communities. So it was done with that intention, to empower them and to allow them to also grow professionally.”

The first rainwater harvesting tank in Wawa Bar was built in 2015. Dixon became involved in the project after WaterAid recruited 24 people from the Miskitu community to train and teach others to build tanks. She heard about WaterAid from friends of hers who were working on the project and approached WaterAid and expressed interest in learning the craft.

“We identified her as one of the women with the most potential to work in this field,” said Eduardo Rodriguez, who is Miskitu and who works with WaterAid in Nicaragua. “She’s active and interested in this type of work.”

As of December 2017, 107 rainwater harvesting tanks have been built in Wawa Bar—104 for residents, and the other three for the clinic, military base and school.

“They’ve changed the lives of people in this community,” Dixon said, describing how children used to routinely fall ill. “Before the construction of the tanks, we would drink from wells. And those weren’t protected from contamination, and it would cause diarrhea.”

Dixon, who left school in the fifth grade, is a veteran, having worked on a total of 10 water systems. Today she trains others (mostly women) to build rainwater harvesting tanks when needed.

The last tank Dixon built was for the Women’s Movement Nidia White organization’s Casa Albergue, a home for young girls who are survivors of sexual violence. Before the construction of the tank, Casa Albergue also relied on wells for its water.

“There is very little help,” said Rodriguez. “There are communities where we’ve intervened where we’re the only project that’s taken place in that community, they are forgotten, so to speak. They are communities with a lot of necessities, but other organizations and even their own government haven’t initiated any programs that create jobs in the community.”

For years, the Miskitu throughout the coast have been involved in bloody land disputes, the result of outsiders encroaching on Miskitu land in search for timber, gold and cattle grazing.

“There are a lot of killings over land. The victims are mainly the indigenous Miskito people in the region,” Rodriguez said.

The Miskitu call these outsiders “colonos” (colonists). Rodriguez describes them as ranchers in search for land for their cattle to graze. When laws prohibit them from buying land, they lease it.

“But when they graze the land, they destroy the forest entirely,” Rodriguez said. “That’s why there is conflict. There is a lot of bloodshed here in this region. And it’s over land.”

These conflicts have lead to many Miskitu communities taking up arms in self defense. But that defense has also hurt efforts to expand the rainwater harvesting tank project from to indigenous communities like Esperanza and Tikiamp.

“That whole sector we couldn’t go in and continue our projects, even though we had started them, because of safety concerns for our people,” Rodriguez said.

Back in Wawa Bar, there is one person who is especially thankful for the project. Dixon, in addition to the many tanks she constructed,  was able to build one for her mother.

“My mother needed to have a tank,” Dixon said. “I’m very proud of that. And my mom is really proud of me.”

The revolution will not be televised: Women share their truths during media blackout