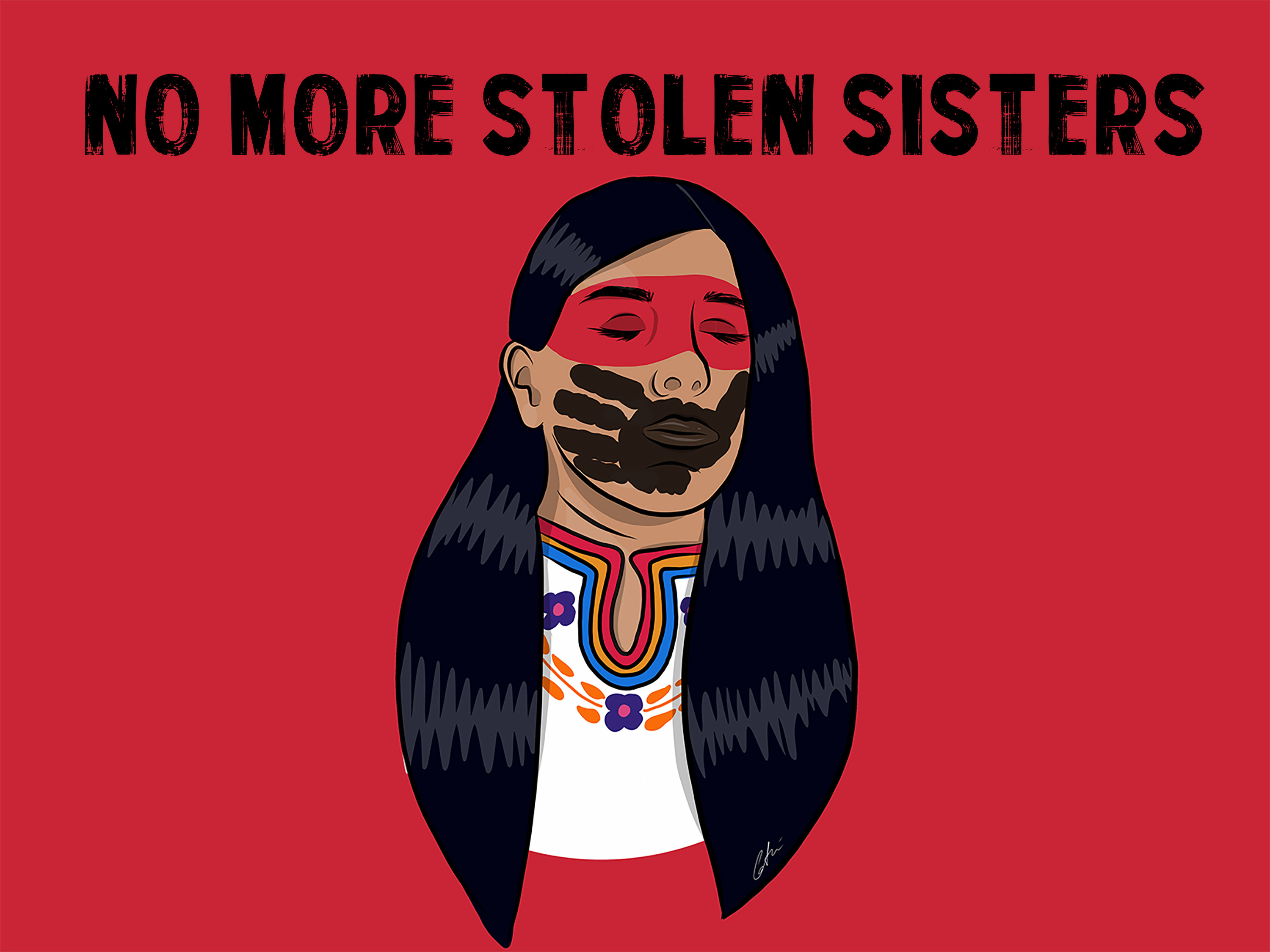 As she completed a recovery program and found an apartment in the Bayview, Jessica Nicole Alva, 35, sought to give her six children a better life.

Known by family and friends for her compassion and community advocacy, inspiring women through her hard-won sobriety, she wanted her children—ages 6 to 17—to do better than her.

The last line of her journal read: “Talk to kids about our future.”

“She’s the most loving person you could imagine,” Marlena Alva, Jessica’s sister, said. “My sister always wanted to be tougher and meaner than her other sisters, but the truth is we wanted to have more heart, gracefulness, compassion and love like her.”

Jessica’s boyfriend Clayton Rhoades moved in with her after his release from prison on parole in late January, according to the Alva family.

About two months later, paramedics and police arrived at her apartment in response to an “apparent hanging” that left Jessica in a coma. On April 6, four days after being hospitalized, Jessica died. 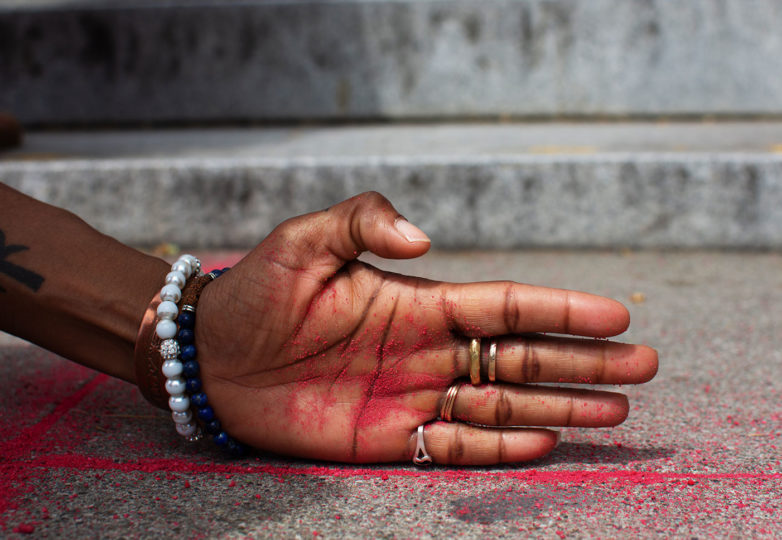 In a statement that no more women will fall through the cracks, Dvina Estrella fills the concrete joints with red sand in front of the Hall of Justice on April 13, 2019. Photo: David Mamaril Horowitz 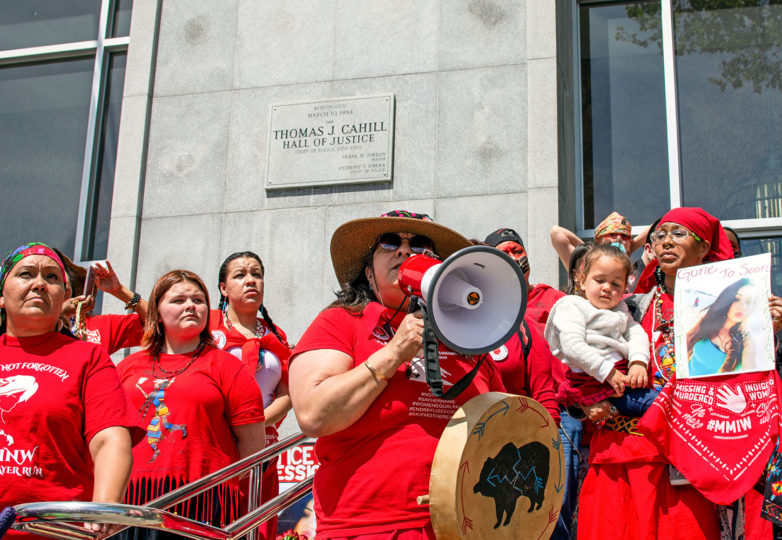 On the footsteps of the Hall of Justice, Desirée Rojas and other activists against domestic violence call for the San Francisco Police Department to rectify an allegedly botched investigation into the killing of Jessica Nicole Alva, on April 13, 2019. Photo: David Mamaril Horowitz 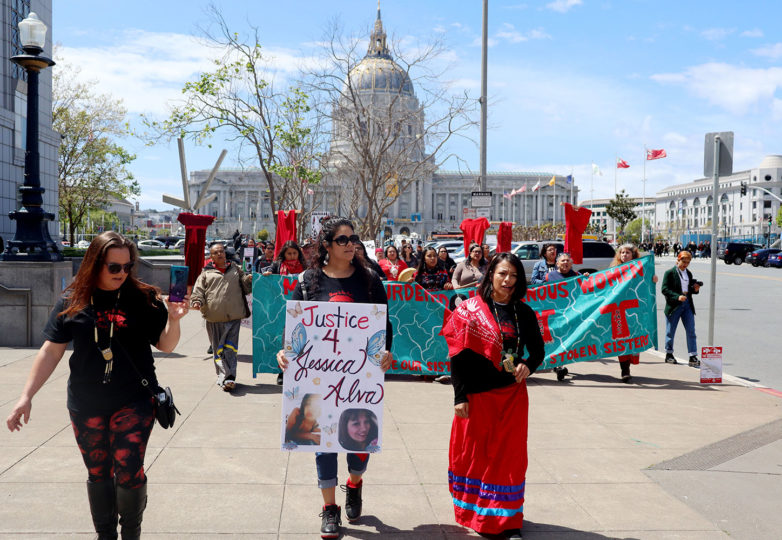 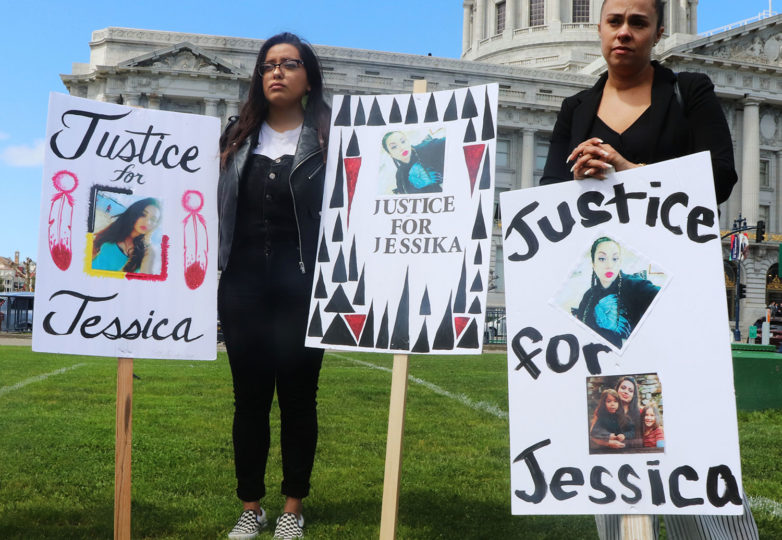 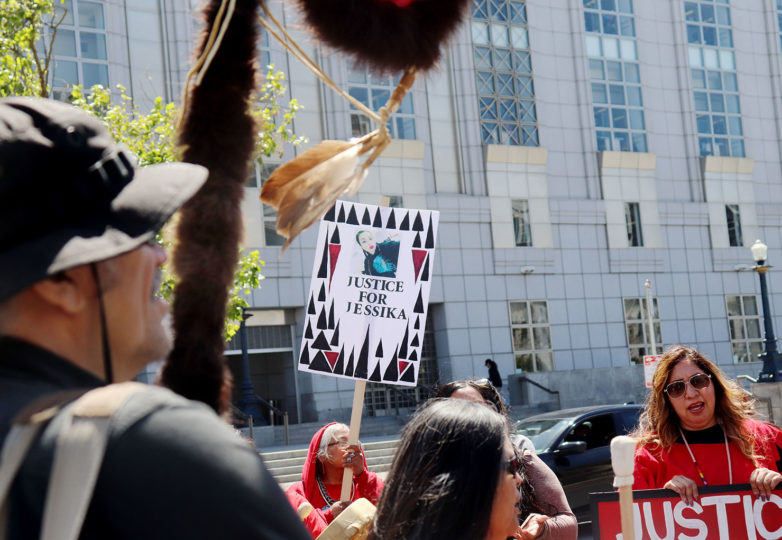 Community members rally in front of the Pioneer Monument in San Francisco, demanding justice for Jessica Alva, a 35-year-old Indigenous woman who was killed, allegedly by her boyfriend. Photo: Alexis Terrazas

The circumstances surrounding her death have sparked outrage from family, friends and the Native American community, who accuse Rhoades of killing her and allege that police botched the investigation for not setting up a crime scene.

While Jessica laid in a coma, her mother Cindy Wolfe photographed cuts and bruises on her arms, knees, hands, a trickle of dried blood from her mouth, viewable on the alternative news website The Daily Haze.

Wolfe said it took three days and a fusillade of phone calls from community members for detectives to begin investigating her daughter’s hospitalization. She said that by the time they arrived at her daughter’s apartment, the overwhelming smell of bleach nearly prevented them from entering.

El Tecolote inquired about Jessica’s death and the protocol for setting up a crime scene when someone is hanged. An SFPD spokesperson responded, “The case is still under investigation so we wouldn’t be able to respond at the moment.”

Jessica’s friend, Morning Star Gali, said she believes that the negative stigmas attached to Native American women influenced the police’s decision not to set up a crime scene.

“As a single mother myself, I know the struggles that she represented. She did represent some stigmas. She was in recovery,” Gali said. “So I think that’s what the police saw, and they weren’t willing to conduct a full investigation based on these disparities. I also want to add that the third leading cause of death with in Native American women is murder. As much as this hurts this is not uncommon.”

George Galvis, the co-founder and executive director of Communities United for Restorative Youth Justice (CURYJ), attended a rally on April 16 and spoke of the violence he witnessed as a child and memories of his father trying to kill his own mother.

“That same violence that was produced in my home, I ended up reproducing it later on in the streets, right here in San Francisco in the Mission District, against men who look like me. I was numbing my pain through violence. A lot of our boys, a lot of our men, we have a lot of false teachings about what it is to be a man,” Galvis said. “We apologize on behalf of the men for all the pain. We recognize this is also a symptom of colonialism, that through colonialism we were taught patriarchy…patriarchy taught men that women were their property…so when a woman finds her power…it’s not uncommon for a fragile male ego to resort to the crudest form of control, which is violence.”

A Facebook Messenger picture posted on The Daily Haze shows what appears to be Rhoades stating he gave police a fake name to avoid being arrested for his parole violation.

“I knew they would figure it out later… But at that point in time getting arrested was not an option,” the message reads.

Rhoades, who has denied the allegations, spent six years in prison for stealing a car at gunpoint and headbutting a police officer in 2013. On April 6, police arrested Rhoades for violating his parole but let him go two days later due to capacity issues at San Francisco County Jail, according to a document filed by the Superior Court of Shasta County.

Now, law enforcement agencies in Shasta County and San Francisco are on the lookout for him once again for not checking in with his parole officer.

They chanted, “Not one more stolen sister!”

The executive director of the Sovereign Bodies Institute (SBI), a research center aiming to address and counteract violent crime against Indigenous people, has already classified Jessica’s death as a murder.

“Jessica was a victim of brutal domestic violence,” SBI director Annita Hetoevehotohke’e Lucchesi stated. “She is one of 461 MMIWG cases that we have documented as tied to domestic violence. Of those 461 women and girls, many, like Jessica, were failed by the system.”

However, city attorney spokesperson Maxwell Szabo said prosecutors cannot press charges until police present a case to the office. He added, to the exasperation of Jessica’s friends and family, that the medical examiner’s office preliminarily ruled Jessica’s death as a suicide.

—Lisa Moreno contributed to this report.