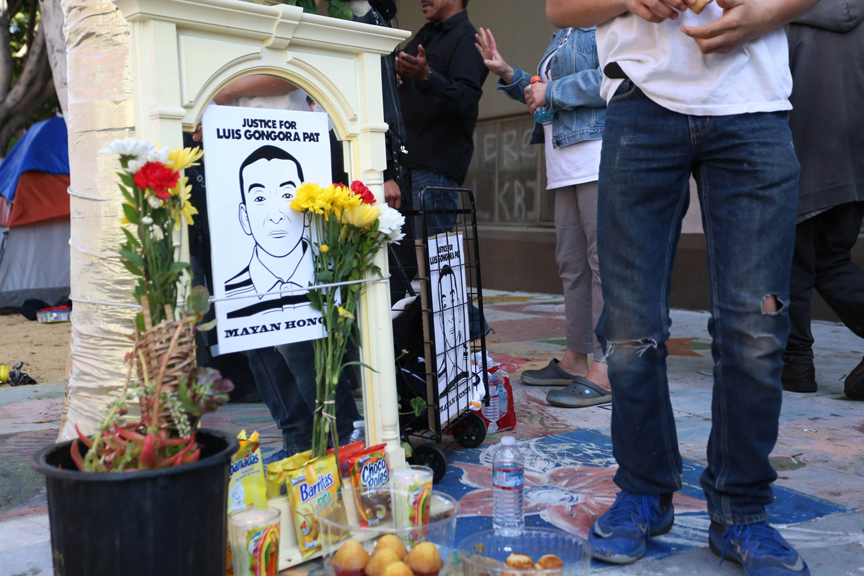 Exactly six months after police gunfire claimed the life of Luis Demetrio Gongora Pat, the slain homeless man’s family gathered at the spot where he was killed on Shotwell Street, announcing legal action against the city and the officers involved.

“This man was killed unnecessarily and unlawfully by the SFPD,” said Adante Pointer, a lawyer in the Law Offices of John L. Burris. “These officers violated their oath, their training, and the law and the public trust by firing at Mr. Gongora when he was not presenting an imminent threat.”

Gongora was killed on April 7 by Sgt. Nate Steger and officer Michael Mellone, after SFPD received calls of a man with a knife. The lawsuit, and the eyewitnesses that El Tecolote spoke to shortly after the shooting, claim that although Gongora had a knife, he was sitting in a non-threatening position when Steger and Mellone approached him.

“He didn’t know, they didn’t even give him an opportunity to know why,” said Luis Poot Pat, Gongora’s cousin. “He was sitting in this area. And in less than 30 seconds, they killed him. And here we are, his family, demanding an explanation.”

“We seek to have these officers held accountable,” Pointer said.  “We understand that from the police department’s perspective, they have been unwilling to hold their officers accountable.”

Adriana Camarena, one of the more prominent members of the Justice 4 Luis Demetrio Gongora Pat coalition, explained the significance of the lawsuit:

“These federal civil lawsuits are critical for families who lose a family member or a loved one to police brutality, because it’s the only way that they can do an independent investigation and actually set the record straight.”

A week before the six-month anniversary, the San Francisco Medical Examiner released its report on Gongora, showing that he had traces of methamphetamine, marijuana and caffeine in his system at the time of his death. Gongora’s supporters are afraid that these findings will be used in a biased way to justify the fatal shooting of someone homeless, because he was “under the influence.”

“That’s what I call an ideological narrative in this country, that says that any drug use makes you either a sick person or a criminal,” Guzman said. “In fact, we only say that when the person is poor and of color.”

The Medical Examiner reported 1.01 mg/L of Methamphetamine in Gongora’s system. According to the Drugs and Human Performance Fact Sheet by the National Highway Traffic Safety Administration, levels between 0.01 to 2.5 mg/L of methamphetamine are listed “normal concentrations in recreational use.”

The report suggested that Gongora wasn’t a drug addict. It described his body as “well-developed and well-nourished,” and his teeth as “natural” and in “fair repair.”

“He was so healthy that the Medical Examiner report couldn’t find any of his organs to have any damage, in particular any damage in his brain,” Guzman said.

The report also described the fatal perforating wound to the top left part of Gongora’s head as being “downward” in direction, suggesting that police shot him when he was either going to the ground or already on the ground.

Pointer also noted that the video, which did not show the actual shooting, did capture a frame of a police officer pointing his weapon downward, again suggesting that Gongora wasn’t attacking the officers as police first claimed.

“I was glad to learn that the autopsy supported the observation that the bullets entered Luis’ body at a downward trajectory,” said Smith Patrick, a witness who first spoke to El Tecolote in April. “That shows in fact that he was not charging at them as had been stated.”

Gongora, who was indigenous Mayan, was a member of the homeless encampment along Shotwell Street. Encampments across the city have been targeted by police and the Department of Public Works for dismantle.

Stephanie Grant was eight months pregnant and living in the Shotwell Street encampment when Gongora was killed. She knew Gongora, and described him as friendly.

“He didn’t deserve it,” said Grant, who has since given birth to her son Jackson Michael, and is living at the HealthRight 360 residential program Women’s HOPE.  “I’ve come a very long way and the fact that I’ve come this far, and nothing still has happened, aggravates me even more.”

David Campos, District 9’s Supervisor who will term out at the end of the year, has spoken to various people living in the tents, and says that Gongora’s name keeps coming up.

“They have this impression that what happened to Luis Gongora sends this message that if you’re someone out on the street in a tent, that you’re not a human being,” Campos said.

Campos said the San Francisco Police Officers Association is the obstacle to reforming  law enforcement in the city.

“The POA is making an investment throughout the city, including this very district,” Campos said, referring to District 9 candidate Josh Arce who has ties to the POA. Arce made an appearance at the event, but left before reporters could talk to him.

[su_box title=”Video by Erasmo Martinez”][su_youtube url=”https://www.youtube.com/watch?v=3vv47Yw4IWk”]Activist listened to the mother of Mario Woods as she cried and reflected on her son’s death in front of the Hall of Justice on October 7th, 2016. Gwen Wood’s son died in December of 2015 after police officers shot him twenty times. Family members of others killed by police officers spoke about the absence of charges against the officers in the killings. Others walked with Ms. Woods to the District Attorney’s, where she asked to speak with George Gascón. He was unavailable to speak.[/su_box]

Red, white and blue: A Cuban in the Land of the Free