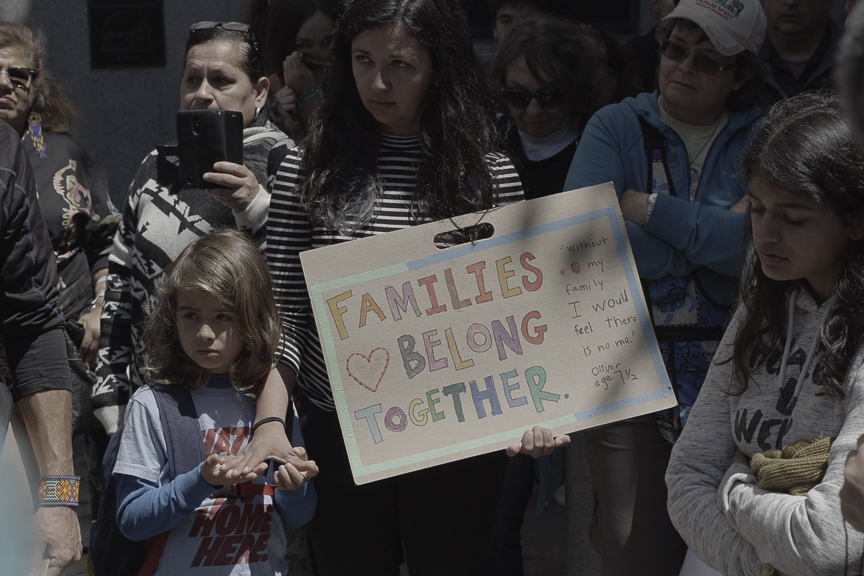 Anyone familiar with El Tecolote knows how we feel about Donald Trump and his administration. We’ve weighed in many times on the president, his dangerous rhetoric and his disastrous policies.

But the president’s policy of forcibly separating families seeking asylum in the United States  went beyond the merely deplorable and into the realm of human rights violation. While Trump did eventually halt it after massive public outcry, more than 2,000 children remain separated from their parents and at this time it is unclear when or even if the administration will be able to reunite them. Taking young children from their parents—children who have already endured the trauma of fleeing their homes as refugees—will cause lasting psychological damage. At the very least, the president owes us all an apology, but what we got instead was typical Trump—blaming first the Democrats and then congress for a crisis of his own making.

Trump and his many supporters continue to maintain that they are not opposed to legal immigration, they just want to make sure that those who immigrate here do it the right way.

Putting aside the absurdity of the idea that there is a “right way” to flee for one’s life, the president’s remarks regarding Muslims, “rapists” from Mexico and people from “shit hole” countries, taken together with the policies he’s pushed since coming to power, show clearly that he is not anti- “illegal” immigration, he is anti-immigrant (unless of course they come from places like Norway and look like him).

The president’s go-to strategy of “othering” immigrants and mongering fear is captured perfectly in the disgusting defense of his policy he attempted to muster, blaming Democrats for breaking up refugee families.

“They [Democrats] don’t care about crime and want illegal immigrants, no matter how bad they may be, to pour into and infest our Country” the president of the United States tweeted on June 19.

It should be obvious to anyone willing to connect the dots, that the Trump administration’s social policies divide Americans into deserving and undeserving—who “deserves” to be here and have a say in what happens here and who doesn’t.

Two years ago when 50 people in an Orlando nightclub were gunned down in cold blood, then candidate Trump used the opportunity to congratulate himself for condemning the whole of Islam, while completely ignoring the fact that the victims were gay men of color killed by another gay man of color, who had been taught to hate himself for being gay.

Whether it’s a Muslim ban, the demonization of Black athletes, ripping Latino families apart or writing LGBTs out of their own story, Donald Trump and his administration have repeatedly staked out a position as defender of a waning social order where straight White Christian men control all the levers of power. The “Make America Great Again” slogan itself is a rallying call to return the country to a pre-Civil Rights era when everyone who wasn’t White and straight and Christian and male knew their place and didn’t cause trouble.

This idealized White America that Trump supporters pine for never actually existed of course, at least not in the way they imagine. The truth is that America has always been aspirational. We may not ever fully live up to the ideal, but we continue to try. And we are capable of being so much better than this.