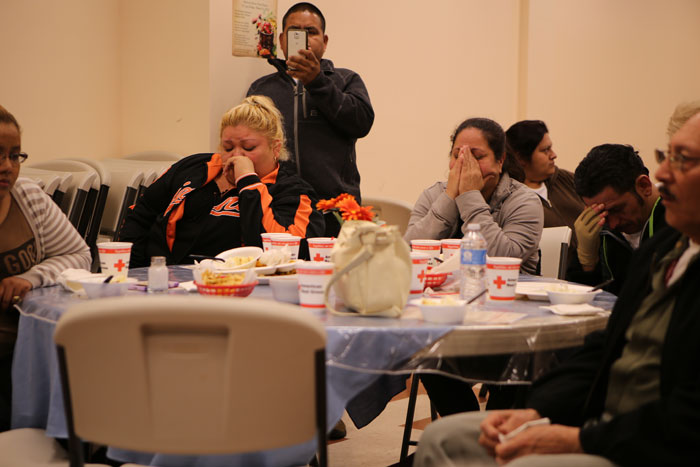 Six Things Your Landlord Does Not Want You to Know

Zack Crockett was riding his bike home from work on Jan. 28 when he passed by the building at Mission and 22nd street engulfed in flames.

“I saw this sea of people filming from their phones and I started thinking about all the families, all the people who lived there,” said the 27-year-old Crockett, who writes for the Priceonomics blog.

That same night, he started a GoFundMe campaign with the goal of raising $2,000. He just wanted to do something to help these families.

And finally, on Feb. 26, Crockett got to help those families by personally handing them the checks from the fundraiser. After GoFundMe and another processing company charged their fees, $165,606 was left for the 27 displaced families. They received different amounts depending on the number of family members and their ages.

Among the displaced were roommates sharing apartments who counted as one family, as well as families of five with three young children. When the fundraiser reached the six-figure range, Crockett decided to involve local nonprofit Mission Economic Development Agency (MEDA) to help manage and divide the money fairly.

“They say it takes a village, but sometimes it takes one person,” said Gabriel Medina, MEDA policy manager.

MEDA met with the families, the majority of whom are Latin American immigrants, to help them make financial plans and build credit.

“Thank God for all [of the] people’s help,” said Nancy Caro, one of the victims of the fire. She received a check for her family on Feb. 26 at the Salvation Army shelter on Valencia Street, where the displaced families were being housed.

Caro found housing on Feb. 20. Her new residence is bigger and it has a yard, but it’s on Treasure Island and it’s more expensive.

No matter where she lives, Caro still considers the Mission her neighborhood. Her son goes to school there, and she and her husband work there. But with the commute taking over an hour, she hopes to find a place in the Mission again.

“Every day I do some shopping here,” Caro said with a smile.

With the money they received, the families said they would replace what they lost in the fire.

“We need to buy everything,” Caro said. “We have only the place for now.”

As of Feb. 25, the San Francisco Human Services Agency had found residences for all of the displaced people, said John A. McKnight, director of emergency and disaster services at The Salvation Army.

The majority of these new residences are located in Treasure Island and Park Merced, but a few of those units require renovation, so some people are being housed temporarily in hotels.

Finding apartments in the city that didn’t exceed 10 percent of what the families had been paying in rent made the search difficult, McKnight said.

Crockett said the money will help, but that the families have much bigger problems.

“This wasn’t just a home for them, it was community,” he said. “My hope is that the owner of this building will restore it and then they can come back.”

Crockett has met with many of the families. He said some were skeptical at first, “because I’m just some guy on the internet.”

“One couple had been in the building for 45 years. They raised their family there,” Crockett said of Humberto Lopez and Eugenia Hernandez. “She lived there since she was a teenager. She bought all her produce downstairs at the market. Her whole life was there in that neighborhood.”

Social media played a big role in the campaign’s success. The same night of the fire, Crockett shared the campaign on his Facebook profile. His friends shared it and “it organically grew.” Thousands of people shared it between Facebook and Twitter.

Doc’s Clock, a bar neighboring the charred building, organized a fundraiser in which 50 percent of the proceeds ($8,000) went to the campaign. Google doubled that, donating $16,000. After one week donations totaled $150,000.

“Some people gave $5, other people gave $5,000,” Crockett said. From tech companies and small businesses to construction workers and janitors, the community came together to help.

MEDA expressed interest in buying the building to make it a permanent place for the residents and the businesses that were once there. It has sent a letter of interest to the building’s owner, Hawk Lou, but Lou has yet to reply.