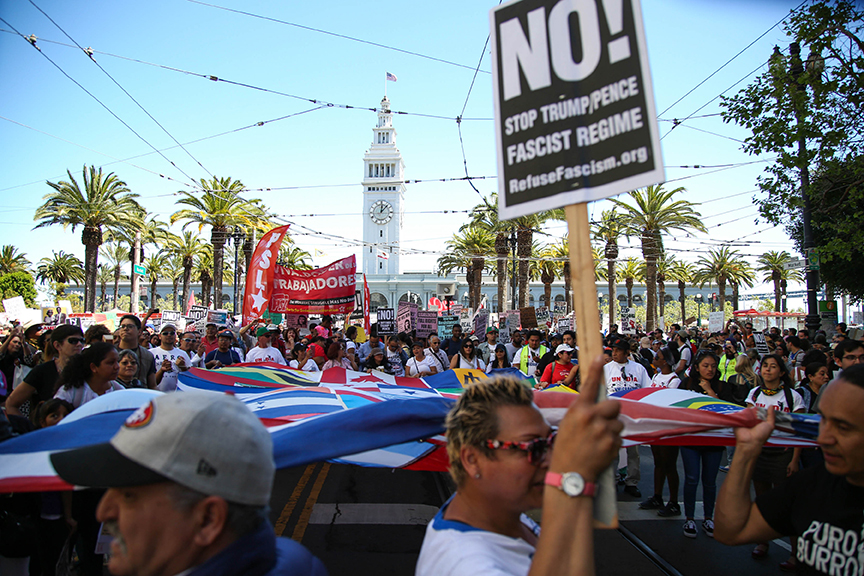 Among the 10,000 people who showed up on May Day in San Francisco waiting to march in the nationally coordinated demonstration billed as a “A Day Without Immigrants,” there was a petite woman named Laura standing quietly to the side with her family.

A 51-year-old immigrant woman from Mexico who has been living in the United States since 1992, Laura has three children, lives in Marin County and has a job cleaning houses.

She moved to the United States with her husband, who had a stable job in Mexico before work became scarce. The family had planned to live and work for a year or two, then return home. But decided to stay and provide the best future for their children.

“Here we are marching with the hopes of sending a message to the people that have the power to help us,” she said cheerfully, “and to make them conscious of our existence and our situations because we too, are people and we too, contribute to the economy.”

The May 1 march began at Justin Herman Plaza at Embarcadero around 12:30 p.m. Several organizations, and protesters—both immigrants and citizens—came together to send a message to the rest of the United States and to the world.

Along 24th Street and elsewhere throughout the Mission District, businesses remained closed. A similar action took place on Feb. 16, when immigrants from all over the world and those in solidarity refused to attend work and school. Business owners did not open their businesses, people did not shop in stores or online, they did not eat at restaurants and they did not buy gas.

Following the Day Without Immigrants in late February, the SF Latino Democratic Club announced the May Day march as a peaceful protest to oppose Trump’s wall, the Immigration and Customs Enforcement (ICE) raids, travel bans, deportations and unjust attacks on workers, women, people of color, the LGBTQ community and their rights. The march was meant to counteract the fear and pain by making a statement while on the streets.

As the march began, Aztec dancers burned incense and danced to the drums, or as Miguel Martinez, 62, a member of the group Xiuhcoatl Danza Azteca, calls it, “The heartbeat of culture.” Martinez started dancing in 1985 and has been dancing ever since.

“We came here to support our gente,” Martinez said on behalf of his Danza group. “It’s really beautiful to be surrounded by our guerreros and guerreras and it feels good to bring healing into the community.” He compared the tradition of Danza to seeds, stating that even though people try to bury them, the tradition will continue to grow and thrive.

Martinez arrived in the United States from El Salvador when he was 10. In 1966, he and his family moved to the Fillmore district. He recalled what it was like looking outside the window during the riots in 1968 when Martin Luther King Jr. was killed. “I was scared,” he said. “I saw people breaking windows and starting fires.”

Behind Xiuhcoatl, random musicians mixed in with local percussion group Loco Bloco and together they banged the drums and blew through large conch shells. Amid those musicians, was 21-year-old drummer, Ahkeel Mestayer. The San Francisco State University student was wearing a large Salvadoran flag tied around his neck when he stated he was a proud son of two immigrants—his mother being from Nicaragua and his father from El Salvador.

Mestayer described growing up in the United States with immigrant parents as complex yet beautiful.

“I’m not fully American in society’s eyes,” he said. “So we create our own culture and identity.” He compared his situation to a Venn diagram, stating that with two languages and two cultures, he finds himself in the middle as a mixture of both sides.

“People move around and share,” said Mestayer as he continued to address that migration is a natural occurrence. “That’s how things are created. That’s how these buildings were created.” He also referred to the poor treatment of immigrants as dehumanizing because people tend to forget that immigrants have feelings too. “In this country,” he concluded, “we’re just a beautiful rainbow.”

The march continued from Embarcadero, down Market Street, and ended at Civic Center at 2 p.m. People gathered around the stage in front of City Hall where they continued to celebrate with speeches, mariachi, food and good vibes.

Editorial: Separating families is a new low for the Trump administration