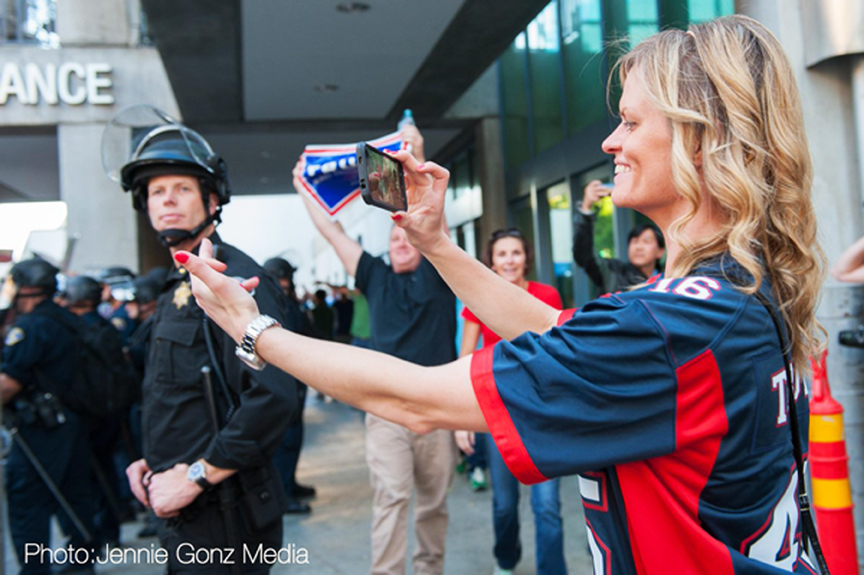 Originally published by Silicon Valley De-Bug on June 6, and condensed here for space.

On Thursday, June 2, the anti-Trump rally staged in San José made national headlines, most of them were for one-dimensional stories about Trump supporters being victimized by violent protesters. Several protesters who actually attended the rally found themselves all over the news portrayed inaccurately, so they wrote their own accounts to give a more complete picture and set the record straight.

The day after Donald Trump brought his hateful rhetoric tour to San Jose, I woke up to a Facebook message from Alan Rappeport of The New York Times. He wanted to talk to me about what had transpired the day before at the Trump protest that I helped organize through my event, “Manda Donald Trump a la chingada.”

I spoke with him over the phone for about 30 minutes. I explained to him that on my event page I was promoting a peaceful protest. I told him that the violence escalated when a Trump supporter punched a teenage kid in the face. It was after that when you see other scuffles breaking out. It was after that, you see the lady get egged in the face. What you did not see was that same lady flipping off the crowd and yelling, “Go back to Mexico.”

After I finished my conversation with Rappeport, the article broke a few hours later online and it also appeared in print the next day. I was pretty nervous as to what he was going to write about me. But I was confident that I made sure to stress that a lot of the people at the protest were demonstrating peacefully. I stressed that it was only a few bad apples on both sides that turned the protest into that you saw on TV.

Then I read the headline: “Anti-Trump Voices Amplify on Internet, With Violent Results.” I was filled with disappointment when I read that title. I knew what that meant. I felt like I was in the wrong for wanting to practice my first amendment right. I felt like all the peaceful protesters were being generalized because they decided to attend the demonstration.

As soon as the article came out, I began getting message after message: “Rot In Hell!” “Go back to your Country Wetback!” “I hope you die!” “Go back to Mexico!” “You are a riot inciter!”

It was a rough day for me, not because of what was being said, but because that hate still exists in this world.

Many of us who came out to the protest saw the unity in our community here in San Jose. But to those of you who only watched the same five clips, you didn’t get a chance to see that. You had to read distorted headlines such as “Ugly bloody Scenes of Trump Supporters Being Attacked,” which appeared in the Washington Post. But don’t believe everything the media is saying or showing.

I’ve seen videos that seem to be more sympathetic with Trump’s racist bigot followers, than the peaceful protestors who are being yelled at by once closeted racists who now feel empowered by Trump’s propaganda to come out in the open and spew hatred to immigrant and minority communities.

The reality is most of us who attended were protesting peacefully and when we did see these outbreaks of violence (myself included) we broke them up. There was one specific incident where I saw a few younger kids taunting a Trump supporter, then physically assaulting him. I ran over to break the situation up and told the youngsters to “keep this the people’s protest, don’t let them take it away from us.” The Trump supporter then proceeded to tell me, “Well, then maybe you should tell your little homies to stop starting sh*t,” as if I were the voice of the people who were initiating this violence.

The handful of isolated incidents that were captured are being played against us and our city. And while violence is not a true representation of our city, the unity and camaraderie that was not captured is the truth of San Jose. In San Jose we pride ourselves on our history, culture and community. And to those of you who gave the media what they wanted, I understand violence, but am not condoning it. I knew it would be used against us, but this protest was the people taking back the streets and fighting the opposition by letting him know we will not stand for his ideology.