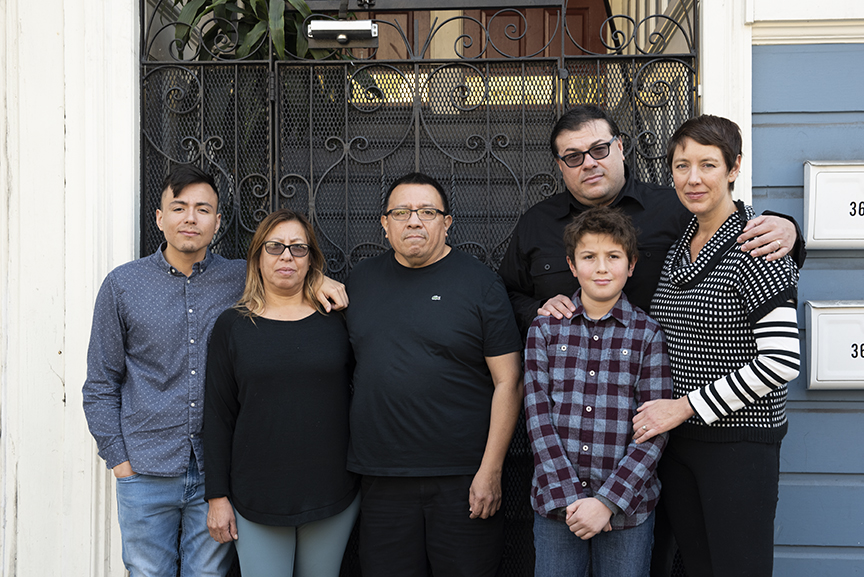 In all directions, from the corner where I live in the Mission, there are signs. “For Sale,” and  “Open House” advertisements appear at a regular, relentless speed, and often foreshadow the removal of families, artists, immigrants and low-income residents. So much more than a mere list, these are people, part of a community, and naming the trend of evictions, mysterious fires and small business closures as simply “inevitable change,” ignores the racial and economic casualties underlying the phenomenon of gentrification.

Once known for its political art and Latinx culture, our neighborhood’s infamy now stems from the specter of the Google buses, the lifeless figures lining up for them, walking right into our small children (but stopping to pet our dog), and the modern box homes brandishing the same colorless hues. Readymade analogies to epidemic and zombie invasion abound. An eviction notice resembles a dreaded diagnosis; residents pray to “not get it,” hopelessness looms over assurances of “don’t worry,” and “we will fight it.”

Up the street, Carlos and Lupe, have lived on the block for 28 years to my 23.  In the ‘90s, I met their oldest son, Carlos, in a martial arts class. Over the decades, we have passed each other exchanging the occasional greeting. Mary and Oscar have lived next door, in the same building, for 15 years. We often pass each other and laugh about our infamous dogs. We are neighborly.

When I saw the “For Sale” sign on the newly painted facade where these neighbors live with their sons, a stream of questions overwhelmed me: “Will they be evicted? Where will the go? What would the displacement of their building of all Latinx families mean for the population on our block as the percentage of Latinx residents continually decreases overall?”

Carlos and Lupe have raised four children in the apartment they currently share with their youngest son John.  When they invited me in, I felt immediately at home. A classic wedding picture anchors one wall, while above the couch beams an original painting of the Aztec princess and the warrior. They purchased the artwork from the artist himself at a store that no longer exists. Also familiar, the hardships we have experienced as longtime renters in a city that increasingly makes us feel unwanted and under attack.

The list of deferred maintenance regarding urgent issues is too long to list in its entirety: mice running through the walls; a roach infestation, major mold issues, to name a few. Lupe winces remembering the mice running across her feet, and recalls the temporary move out for repairs that dragged out for six months. They recount years of substandard living conditions under multiple owners, and with former property managers, Azari, (which has rebranded itself as Epic). The building, nonetheless, recently sold and the new owner plans to move into an empty unit. The couple has resolved not to give up though. Carlos won’t let “the rooster sleep” on them. Lupe maintains they  “have to fight and pray.”

Upstairs, at Mary and Oscar’s, abundant natural light illuminates their living room and the stacks of books that fill this writer family’s home. Mary keeps tabs on unhoused neighbors and takes note of hazards. She had to move an open house sign for a “luxury Grand Dame Victorian” once as it blocked the crosswalk for strollers and wheelchairs. Oscar marvels at how little regard the speculators and landlords have for the impact of their actions. “How do they think this is going to end?” he asks. Meanwhile, Mary maintains the perpetrators of renter abuse need to be named and exposed. As Oscar connects the dots between ominous signs—the defeat of the voter-sponsored rent control initiative Proposition 10, wildfires darkening the daylight as we talk, the looming seismic threat—he somberly observes how much more important it has become in the city “to make a bigger profit, than for a family to have a home.” Indeed, brown water spewing from the faucet mar special memories of baths for their infant son. And it took city inspectors and the fumigators to step in and force Azari to address the rodent infestation. Mary has waited to put pictures back up on the wall, just incase.

We are all struggling. Carlos, a veteran Marriott employee, has been on strike for weeks, Mary is recovering from major illness, and my own family recently fought an owner move-in eviction—the only Latino family, two school-aged children, not the only choice for a legitimate owner move-in (OMI) eviction. We have all witnessed neighbors and friends packing up, crossing the bridge, evicted or priced out. I take note of it all, continually nervous, and with a sense of survivors guilt as Lupe’s feeling “that they don’t want Latinos in the city anymore,” echoes my own fears.

I wanted to highlight these families, showcase the threads that hold the Mission’s fragile tapestry together, before it unravels—to underscore the humanity behind the “trend.” Two days after our visit, the neighbors received notice that new owner intends to commence an Ellis Act eviction. Roque Dalton’s poetry has long sung the Mission’s anthem,  that “poetry, like bread, is for everyone.” With historic bakeries and art galleries shutting their doors, and families paraded out of their homes, it’s becoming harder and harder to hear these historic verses.

Carlos’ oldest son has claimed the Aztec princess and warrior painting as his only heirloom. Another version of the image adorns the wall at 24th and Harrison, steps away from recently evicted landmarks. Real estate listings reference the vibrancy here, yet summarily assist the displacement of the people who make this neighborhood what it is. They didn’t arrive in ships from across the sea this time; they disembark from luxury cars and tech company buses. The best science fiction can’t prepare you for the experience of actual invasion. Indeed, we seem to be shrinking into small pieces on the classic board game of Monopoly that the developers play for sport, no doubt online, with no regard with who was here before.