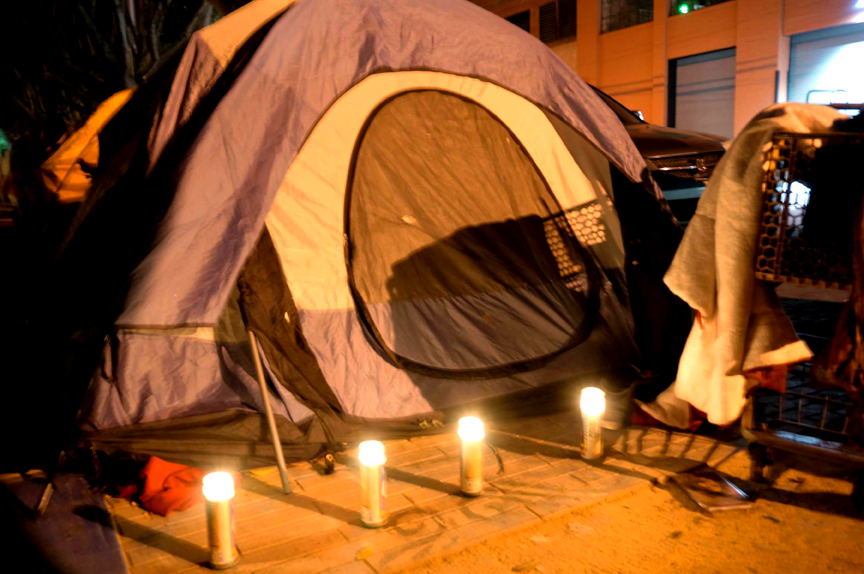 On the morning of April 7, screams could be heard emanating from the homeless tent encampment, which lined the sidewalks of Shotwell Street between 18th and 19th streets. Residents had just witnessed one of their most endeared community members, Luis Gongora, shot to death by the SFPD.

“Them people across the street, they the ones that always call the police on us,” Markel Rayborn, a homeless resident of the tent encampment where Gongora was killed, said, as he pointed to industrial buildings across the street from his tent. “Also, those new shops and the people that are going into them just don’t want us here. Everywhere we go they just build new shops and then the nerp’s start coming around.”

“Nerp” is a term that is used by encampment residents, which refers to police officers who know every occupant of an encampment. Residents are harassed on a daily basis, and police oversee sweeps, ultimately forcing them to move.

Rayborn, 38, is a community leader within the Shotwell encampment, and a lifelong resident of San Francisco. I sat with him in the tent of the now deceased Gongora two days after Gongora’s death. During the interview, he described the encampment as a “family,” which functioned the same as any other community—the only difference being its members are homeless.

“Look at us right now,” yelled Rayborn. “Everyone is drunk, smoking too much. Strong relationships within the community are all destroyed because we just witnessed our friend being murdered. We are traumatized by what has happened.”

Despite the trauma, Rayborn said that his neighbors “plan to keep this camp and our community strong,” and that they will “come back and rebuild.”

Rayborn’s plans of keeping his community together are in direct conflict with Mayor Ed Lee’s public statements that were made the previous day:

“Once the various investigations have finished collecting evidence and completed their interviews of witnesses, I will be ordering the Shotwell camp to be taken down and for it not to come back.”

On the evening of April 9, two days after Gongora was killed, and prior to the completion of the three open investigations into his death, SFPD descended upon the encampment and forced all occupants to vacate. The encounter, which was filmed by local activists, shows the SFPD destroying the tents of the camp as its wounded community slept.

Then on the morning of April 10, SFPD officers were videotaped harassing two of the eyewitnesses of the shooting. Jon Visor and Stephanie Grant resided in the encampment and have expressed fear for their safety after going on record and refuting the official account of Gongora’s death. Grant, who is in late-term of pregnancy, and Visor are now in hiding.

“I screamed so loud and hard that my wife ran to me and grabbed me. She held me and took me away from the window. I was traumatized,” said witness Robert Whitworth who lives across the street from the encampment and witnessed the shooting from his window. “I saw him bleed out, and he had to have died right before my eyes.”

Whitworth says he will never be the same again.

As I spoke to Whitworth, he described a memorial for Gongora and the artwork of a resident of the encampment named Javier Chab Dzul.

Dzul was Gongora’s neighbor; he paints beautiful murals on the sidewalks of the streets where he lives. His work is located throughout the city and has become a marker for where he has lived for the last two years.

Dzul is a world-class artist who, under better circumstances, might have been able to make a living beautifying blighted surfaces. But he only does this for free as a release from the trauma of being homeless.

He drew a sketch of a mural that he wishes to paint for Gongora, and is on a journey to find a wall space on a building, which would welcome the story of his lost friend, and the voiceless community of San Francisco’s tent cities.

Dzul has reached out to several community art projects and thus far, none have welcomed him to tell his story.

Those who wish to help Dzul find a space to paint his mural can contact the author of this story at amos.lg@gmail.com