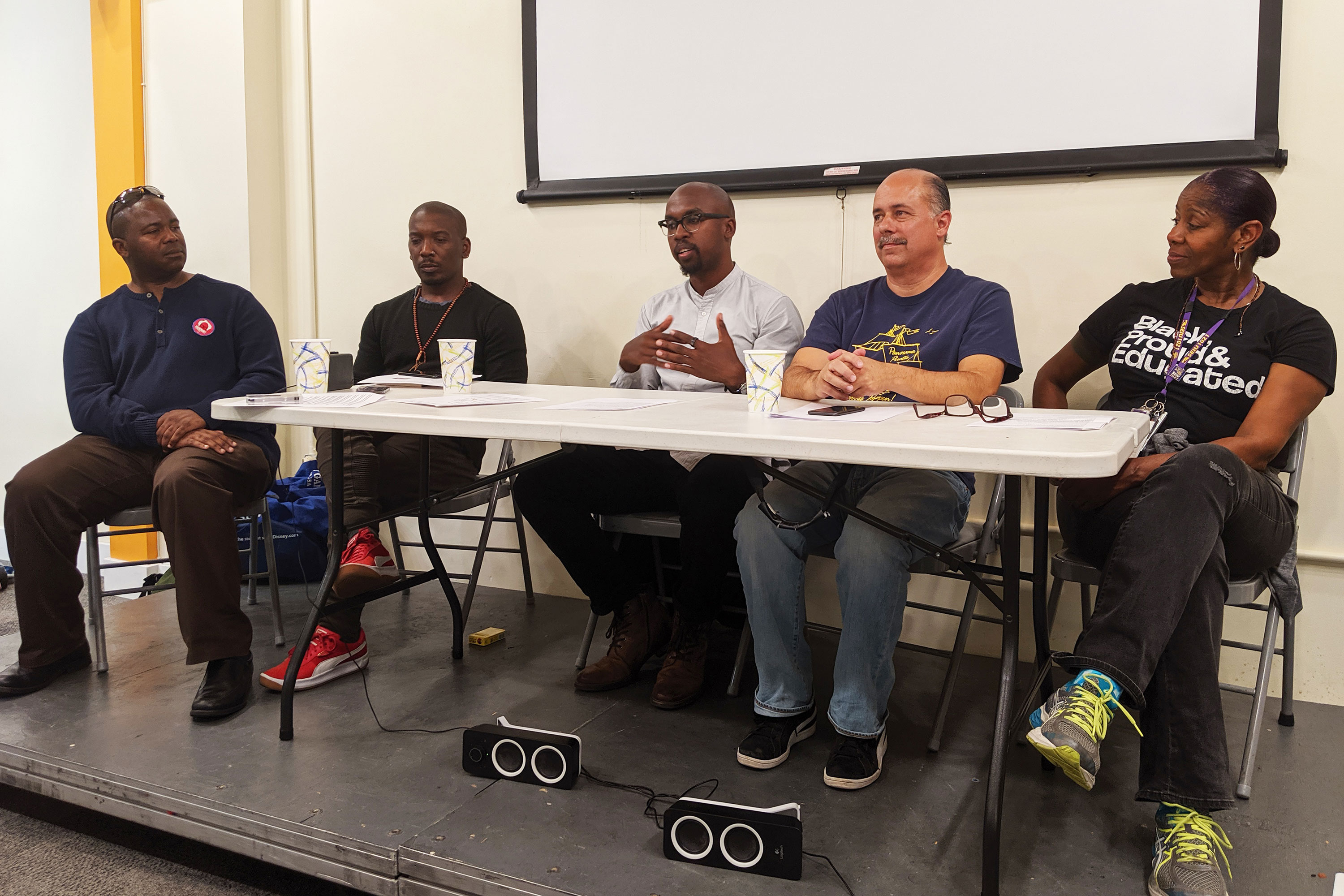 His lyrics relay the horrors of an event he and his students experienced at Thurgood Marshall Academic High School (TMAHS) on October 11, 2002 at the hands of the San Francisco Police. Since it has proven so difficult to talk about this experience, both because of the trauma that accompanies it and because of the way city entities and media spun the story to reflect poorly on the school, he turned to art as an outlet to process 10/11, while much of the event remains a forgotten occurrence or unknown to other San Francisco residents.

But on Sept. 18, 2019, at the Eric Quezada Center for Culture and Politics, Peebles spoke publicly for just the second time about the event in a panel about 10/11 hosted by the Latino Democratic Club and moderated by Jeremiah Jeffries. Peebles was joined onstage by three other individuals affected by the events of that day, including Kim-Shree Maufas, PTSA president at the time and former Board of Education commissioner whose dissertation provides much of the information for this article, Mark Sanchez, who was sitting on the school board in 2002, acted as a substitute teacher at Thurgood Marshall for some years and currently serves as the Vice President for the Board of Education, and Stevon Cook, Peebles’ former student and current president for the Board of Education.

Khalil Anthony, still known to many as Mr. Peebles, was a 29 year-old literature teacher in 2002 just two years into his career at TMAHS at the time of the event. TMAHS was born a consent decree school, meaning it was founded in 1994 as the result of a settlement between San Francisco Unified School District and the NAACP, in which the parties agreed upon the fact that one race should not constitute 45 percent or more of a student population. This meant ultimately that TMAHS was destined to be perceived as “a black school,” despite the majority, 45 percent, of students that year being Asian, compared to the 28 percent of African American and 14.9 percent of Latino student populations.

Marshall administrators actively recruited well-educated, experienced teachers, and in turn, these educators were drawn to the rigorous academic program and college-driven attitude adopted by many of the students, a reverence for academia and respect for one another, which was frequently referred to as “the Marshall way.”

When asked what was lost, particularly for the black students that day, Cook paused before responding to explain that he might get emotional. “It was like a Mecca for us. We really thought we were going to be something because that’s what they expected of us. There just wasn’t another option.”

But on Oct.11, 2002, “the Marshall Way” was lost. Early that morning, just before the school day started, there was a dispute concerning a financial matter between two male students, one Asian and one African American. The dispute escalated into a fistfight that was then subdued by TMAHS staff. The parents were notified of the fight and asked to have their children picked up from school for the day.

A few hours later, the older brother of the African American male who was a part of the fight arrived at the school and was met by a handful of friends of the Asian individual. The encounter escalated into a physical confrontation, though never beyond the point of a fistfight. Without attempting to solicit the help of teachers or other staff, the SFPD school resource officer (SRO) stationed at the school issued an officer in distress call.

“These calls are typically reserved for when officers are in some form of life-threatening danger,” said Chief Deputy Sheriff Paul Miyamoto, a sheriff at the time who sent some of his own officers to TMAHS on Oct.11, and who sat in the audience at the panel.

This call resulted in a city-wide alert to all uniformed officers on duty. Since many news outlets listen in on police radio, all major media outlets also caught word of the officer in distress call. But as a club member was quick to point out, “I hesitate to say anything would have been different if the correct call had been issued,” as rather than the small dispute being clarified and resolved quickly, the situation only escalated once police officers arrived.

Just weeks prior, there were more egregious incidents at two other high schools in the San Francisco Unified School District that were responded to with less force. In September 2002, SFUSD informed SFPD of a gun fight occurring at Washington High School. Despite having nearly triple the student population of TMAHS, police responded with one car, and the situation resolved.

One week later, a knife fight broke out at Lincoln High School. Six police officers responded to the call for a school with 2,560 students. The difference between these occasions rests in the fact that both Washington and Lincoln were predominantly White and Asian schools.

Within less than 15 minutes of the SRO’s call at TMAHS, 120 officers were on the school grounds; some remained outside the school and others hovered overhead in the form of helicopter support. Meanwhile, roughly 90 armed officers swarmed the grounds, many of whom were marching in full riot gear which included helmets, vests, and batons.

Just before the officers arrived at TMAHS, the new principal sounded the school’s fire alarm, elevating the tension of the situation. Students were conflicted as to whether to evacuate, as they had been taught during fire drills, or to stay in their classrooms. “Many students were triggered by this since they’d had encounters with police in their neighborhoods before,” Maufas explained.

When Peebles looked out his classroom window, he witnessed officers striking students with batons. He instructed his students to remain in the classroom while he went out into the halls, where police in riot gear marched in formation with their shields in front of them, keeping students back who were trying to evacuate.

He recalls seeing an officer in the doorway of another classroom “literally picking up a student by the base of her neck and throwing her onto the ground face first.” Peebles’ retrieved a video-recording device from his classroom before returning to the halls. But when he began questioning police who were using such extreme force, he was quickly arrested with charges of  inciting a riot, despite having been in his classroom just moments prior.

Peebles was not alone in his arrest. Three other students were taken away in handcuffs. “Parents weren’t allowed to see their own kids for days so that their bruising would go down,” Maufas said. Then, before they had the chance to get a lawyer, the Mayor brought the students in to sign a contract agreeing not to sue the city.

For months, these families were silenced. A school board hearing was not held regarding the incident until the following year in March 2003. The police never issued an apology for their misuse of force, and the principal returned the following year.

But something beaten cannot return to where it began. After the incident, many students transferred. The graduation credit level requirements were lowered to accommodate the new student population after the close of another high school. Individuals were left to find ways to cope with the trauma of that day.

San Francisco must finally acknowledge a 17 year old secret that as it championed itself as a city of inclusivity, just as it perpetuated a long history of events like Little Rock Nine, events of racialized policing in schools. As the anniversary of the 10/11 approaches, San Francisco must find a way to reconcile with this event.