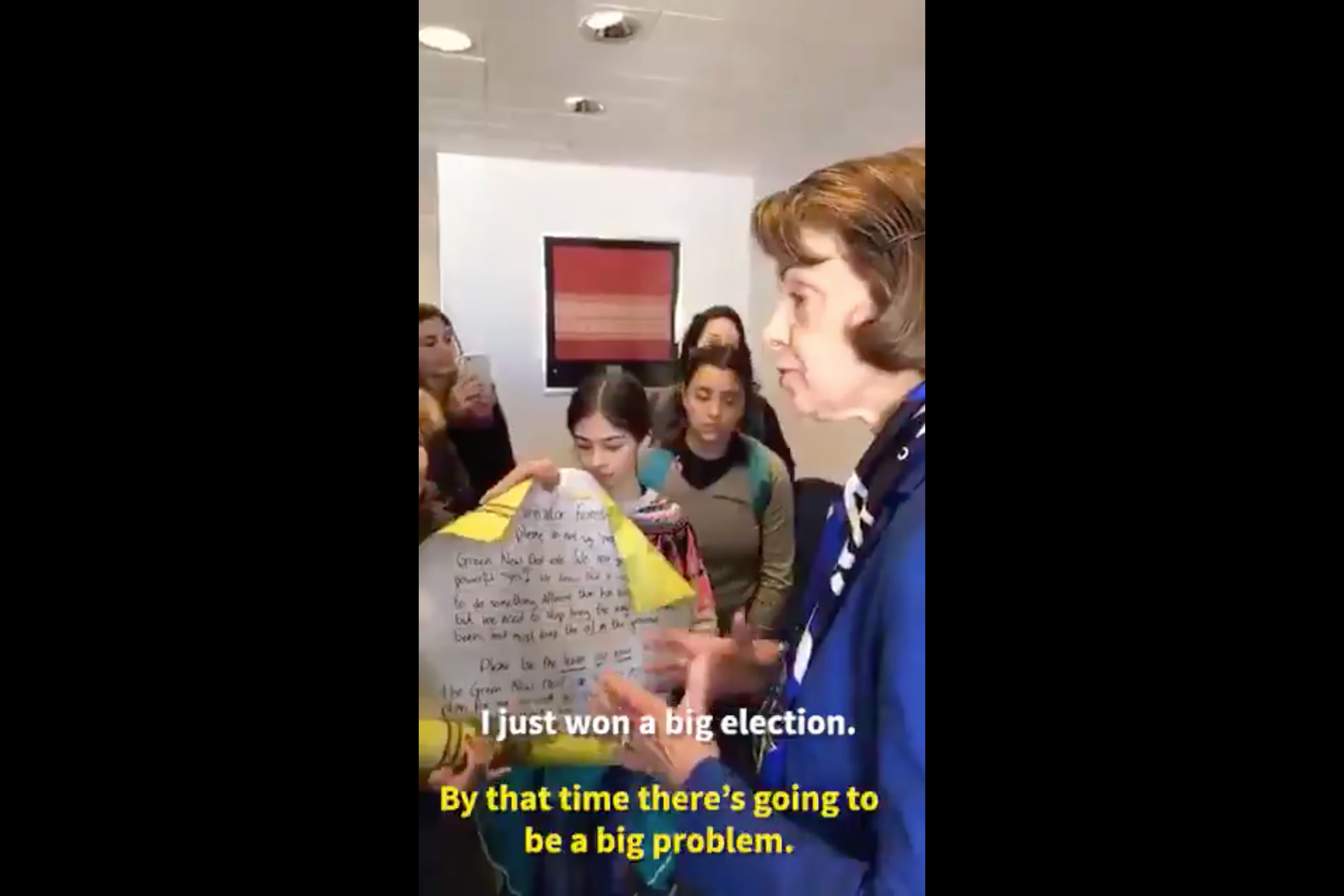 No matter how you feel about Venezuela, attacking journalists is wrong

This is how @SenFeinstein reacted to children asking her to support the #GreenNewDeal resolution — with smugness + disrespect.

This is a fight for our generation’s survival. Her reaction is why young people desperately want new leadership in Congress. pic.twitter.com/0zAkaxruMI

I am a 25 year old constituent of California Senator Dianne Feinstein and I am asking her to please support the Green New Deal. Her proposal to address global warming and move to net zero carbon emissions by 2050 is insufficient and a non-starter for America’s youth. The global scientific community has issued reports concluding that we have 10 years left to completely move to renewable energy sources or the effects of global warming will be devastating. Proposing policy that does anything less is contributing to the mass violence that the climate crisis is unleashing upon frontline communities and all future generations of humans.

When it comes to climate legislation, we must prioritize today’s youth as they are going to inherit the costs incurred from inaction on climate change. Feinstein has only three options that are politically viable: (1) support Senator Markey & Rep. Ocasio-Cortez’s Green New Deal proposal, (2) propose climate legislation that actually meets the needs of America’s youth, or (3) step aside.

Regardless of what legislation the Senator believes can pass a Republican-held Senate, we need to push for solutions that adequately address the climate crisis at all costs. We need Senators to push the goal post further, rather than weakening our standing at the negotiation table. Senator Feinstein’s proposal fails to address the gravity of the crisis; by not backing the Green New Deal, she is advocating for her own political agenda rather than serving her constituents. The brave kids speaking up and all future generations of Californians deserve better; we need a Green New Deal now. #ListenToTheKids

I am a 26 year old teacher here in San Francisco and the Green New Deal is giving me hope for the future of my students. Climate change is happening now and the impacts are only going to get worse. Seeing the young people in my classroom coughing through suffocating wildfire smoke in back-to-back years and imagining that this will be their future is devastating. Knowing that the International Panel on Climate Change has said that we only have 12 years to take action if we hope to maintain a climate that doesn’t include extreme weather, drought, fire, and famine means that we must take action on an immense scale and do it quickly.

The Green New Deal is the first potential piece of legislation to tackle this issue that I’ve seen in my lifetime. I write this letter not just for myself, but for each and every elementary school student who I dream of a livable future for.

“Outside!” was among one of the first words my son ever uttered. He looked so cute as he stood by the door, hoping to go out to play. He was just over a year old when the Paradise fires happened, and I had to keep him inside for two weeks to protect his lungs from the thick smoke blanketing San Francisco. After that, he stopped asking to go “outside.” Perhaps he had learned that our air, our climate, may be something to fear. In addition to the sorrow I felt for my fellow Californians who lost their lives in Paradise, I felt fear for my son’s future as I realized that his childhood in the Bay Area will be drastically different from mine.

Our children deserve a livable, stable climate. Unfortunately, our window to act to prevent the worst effects of climate change is closing quickly. That’s why I became involved with the Sunrise Movement. Together, we are reaching out to our representatives across the nation to garner support for the Green New Deal to address climate change. Unfortunately, Nancy Pelosi and Dianne Feinstein have so far declined to support the resolution for the Green New Deal. I urge you to call both of them today to share your own story of how climate change has impacted your life. Your voice, your story, and your future matter!

The climate is changing. Fire season is longer and the flames more voracious. Our city broke its all-time heat record in September, 2017. This decade witnessed the worst drought in a millennium, posing serious challenges to our water security.

Sadly, our politicians are not changing in accordance. While Alexandria Ocasio-Cortez has been an inspirational voice in DC, Nancy Pelosi has repeatedly tried to pour cold water on the Green New Deal. Dianne Feinstein has not endorsed the resolution, nor has she put forth any alternative proposals for tackling what is truly the greatest challenge of the 21st century.

Young people across the nation are on high alert: the world we will inherit is in peril, and it is paramount that we address this crisis. The Sunrise Movement is organizing and empowering youth to demand genuine, comprehensive action from our elected leaders:

NANCY PELOSI and DIANNE FEINSTEIN—you MUST endorse the Green New Deal! Imagine your grandchildren dancing at their grandchildren’s weddings… if you do not take bold action, the happy future you envision will never come to be.

Dianne Feinstein, at 85, may honestly feel that there are more pressing problems facing our nation than climate change. Trouble is, none of us even half her age have that luxury.

The Intergovernmental Panel on Climate Change says that we have only 12 years to transform our economy to preserve a stable climate for human civilization. The Trump administration’s own National Climate Report says that climate change presents “growing challenges to human health and safety, quality of life, and the rate of economic growth.”

In San Francisco, we are lucky; we are currently protected from the worst effects by geographic fortune. Yet the fires this summer and fall which devastated our neighbors sent us smoke plumes, warning signals that what befalls the canary will soon harm the miner.

A Green New Deal—which is a framework to encompass multiple laws and projects—is not an environmental fringe issue; it is both a health and economic survival necessity.

At 82, I have lived long enough to become a father, grandfather and great-grand uncle … all milestones I would like to embrace without reservation. The world, however, is on the brink of hurtling to annihilation caused by our own abuse of the earth.

The current administration is promoting drilling for oil in the Arctic as well other precious pristine areas. Unconscionable is too tame a word to encompass the concern. Respect for this precious Earth and its global must be paramount.

#HereToStay: Undocumented youth activists put themselves on the frontline