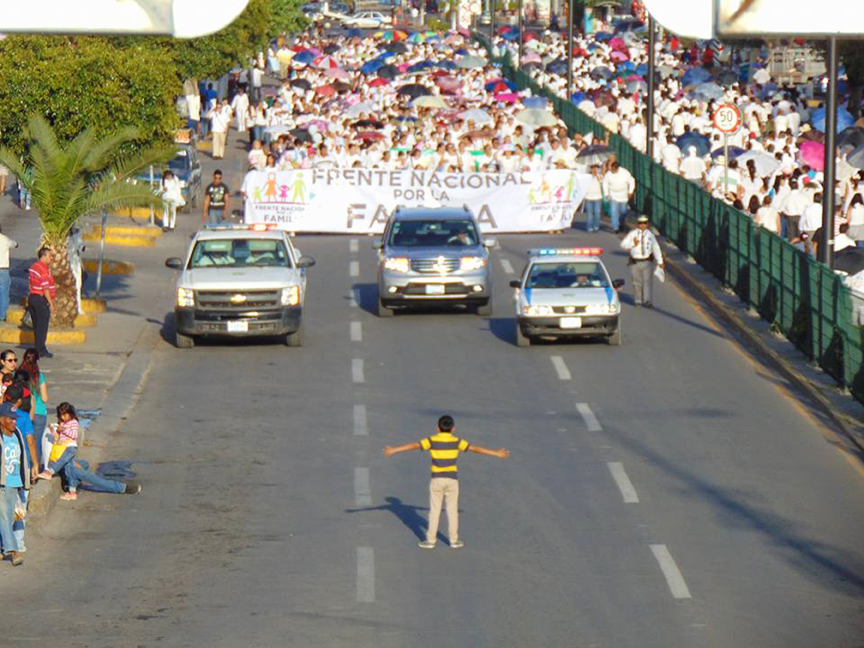 Independence Day in the Mission

Thousands of people, dressed all in white, protested in different cities throughout Mexico on Sept. 10 and 11 against President Enrique Peña Nieto’s proposal to legalize same-sex marriage across the country.

The organization behind the demonstrations is the Family National Front (Frente Nacional por la Familia), a conservative group where different religious people—such as Catholics, Methodists and Mormons—gather for a common cause. The group seeks to prevent the legalization of marriages between same-sex couples across the country and wants to prohibit such couples from adopting children.

The group says it rejects “strongly and categorically, this package of authoritarian initiatives and [demands] that President Enrique Peña Nieto remove them since he presented them based on his personal conviction and without consulting us.”

Protesters are demanding respect for the bond of marriage between a man and a woman. They also seek to prevent public school students from being educated on issues such as homosexuality and trans-sexuality.

Using the hashtags #DefendemosLaFamilia (DefendTheFamily) and #NoTeMetasConMisHijos (Don’tMessWithMyKids) on social media is how Family National Front promoted and summoned people to go out and march.

Adults and children of all ages were part of these protests, marching with banners that read “No family no fatherland,” “Dad + Mom = Happy Family,” and “Marriage is only heterosexual.” These slogans were clearly discriminatory against the LGBT community.

According to the Family National Front official Facebook page, 130 marches were held in 31 Mexican states. According to the organization, history was made on Sept. 10, with 1,274,400 people marching throughout streets in Mexico for the same cause. On Saturday Sept. 24, an even larger national march is expected in Mexico City, from the National Auditorium to the Angel of Independence.

In response, hundreds of people from the LGBT community came to protest outside the capital’s cathedral against the Family National Front’s discriminatory marches. The counter protesters also demonstrated against the church’s intervention in the discussion of same-sex marriage.

More than 60 organizations came together for the demonstration, which was organized by Mexico’s National Pride Front. They seek to defend the few LGBT rights achieved in Mexico, demanding respect for sexual diversity and especially stop to homophobic hatred. According to the National Pride Front, religious groups and organizations such as the Family National Front are an attack on the rights and freedoms of the LGBT community.

Waving rainbow flags and banners reading, “We are also family,” “He preached love and peace, not hatred and ignorance,” and “Respect diversity,” among others, the protesters are calling for a halt to the hateful messages on the part of religious groups.

The reforms, presented last May by President Peña Nieto, would legalize same-sex marriages across the country. Such marriages are currently legal only in Mexico City and eight other states. This reform is presently in the Senate, and its future is expected to be decided in the coming months.

But hope exists, and was reflected in the picture of a child in Celaya, Guanajuato, taken by journalist Manuel Rodriguez, which went viral within hours. During the protest in his city, this child, standing alone in the middle of the street with his arms stretched open, was trying to stop the caravan of hundreds of people protesting against the legalization of gay marriages nationwide. Images like this show that there is still hope.