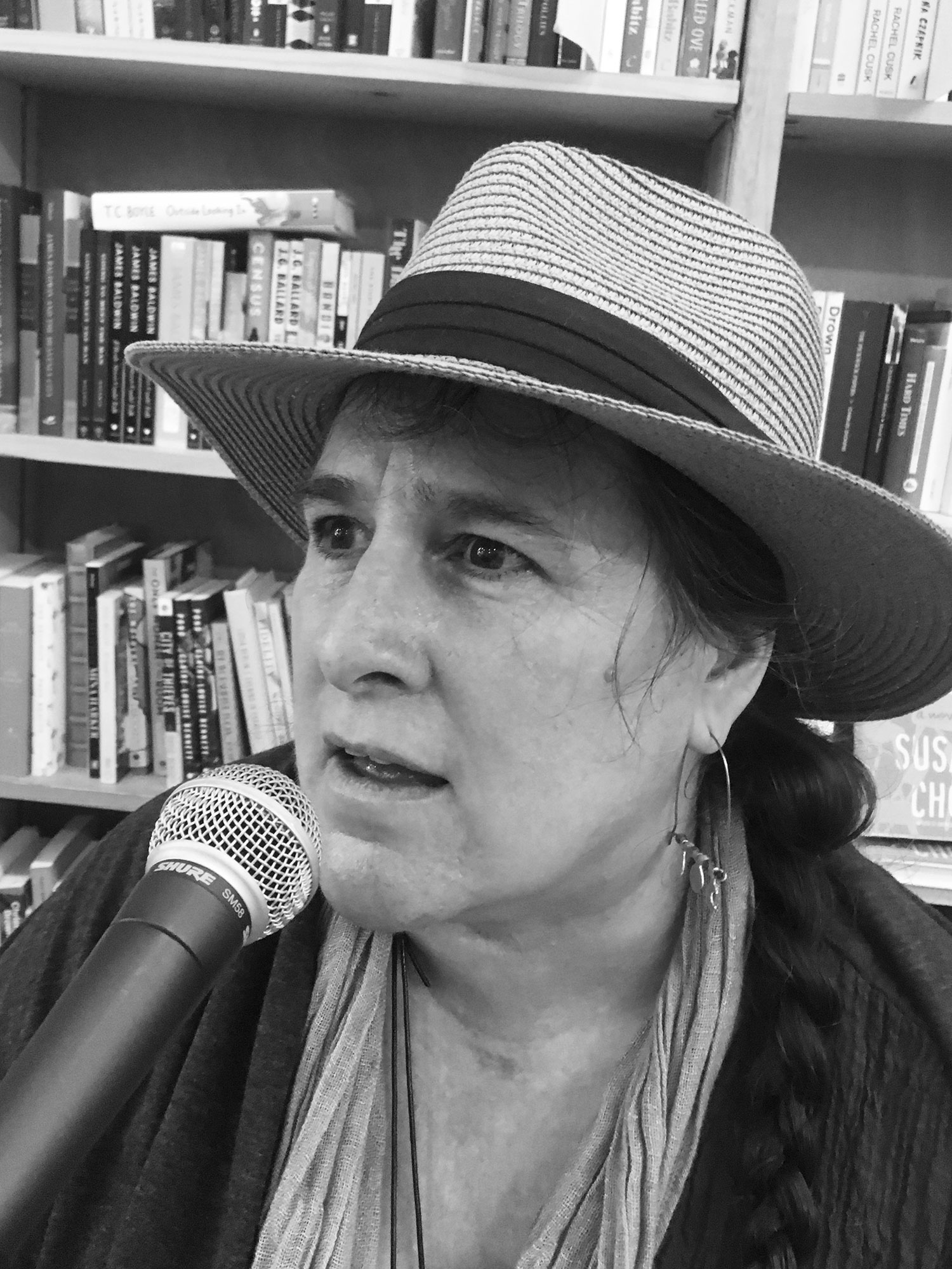 Kim Shuck wears many hats as San Francisco’s seventh poet laureate, figuratively but also literally; her 2017 inaugural speech involved nearly six hat changes, each a tribute to her story and heritage—from a band of flowers around her head to a giant purple squid with its stuffed arms dangling about.

The most important things in life are silly, she says, poetry and people included. It’s a perspective Shuck stands by while furthering the work of past honorees who’ve kept the art and poetic tradition alive in San Francisco.

“Fun doesn’t have to be expensive and you don’t need permission to make art. That is the real message I’m trying to bring,” she said.

An author, weaver, and bead-work artist, Shuck finds inspiration in Southeastern Native American culture and tradition, intertwining contemporary urban Indian life with her experience as an Ani Yun Wiya (Cherokee) and Polish-American born and raised in the Bay Area. Her poetry collections include “Clouds Running In,” “Rabbit Stories,” “Smuggling Cherokee,” and most recently, “Deer Trails,” published by City Lights Books as part of the San Francisco Poet Laureate Series.

As a fifth-generation San Francisco resident and a member of the Cherokee Nation of Oklahoma—one of 573 federally recognized tribes in the United States—Shuck acknowledges the vast realities people endure each day. Her voice, she notes, is not the rule nor is it representative of all Indigenous people or San Franciscans.

Her literary work resists the generalizations often placed on Native writers, who must navigate through a society shaped by colonialism and polluted with stereotypes.

San Francisco has been struggling in recent years with how to address its own controversial history and how it is represented in the art world.

In 2018, Shuck advocated for the removal of the “Early Days” sculpture from Civic Center’s Pioneer Monument, which depicted a fallen Native American lying at the feet of a vaquero, his hand raised in victory, alongside a Catholic missionary pointing to heaven. The San Francisco Arts Commission deemed the bronze statue a disrespectful portrayal of the “degradation and genocide of indigenous peoples” and decided to remove it.

In June, the San Francisco Unified School District (SFUSD) unanimously voted to paint over a 1,600-square-foot fresco at George Washington High School, prompting debates among hundreds of artists and academics regarding its historical and educational value. The conflict revolves around two scenes depicting the life of President George Washington, specifically his history as a slave owner along with his role in American expansion and the subjugation of Indigenous people.

The “Life of Washington” mural and Early Days statue are part of growing disputes in America between those who oppose the celebration or advancement of false narratives about the past and others who believe in accepting and learning from the hard truths of our country’s history.

“One of the things that’s happening is this false dichotomy has been set up where you destroy it or you love it,” she said. “I know why [the mural] upsets me but I’m also an artist and I understand why people want to retain it.”

Shuck, a former instructor at San Francisco State University and California College of Arts, is one of 13 recipients of the Academy of American Poets inaugural Poets Laureate Fellowships, a program that promotes creative and civic projects around the country like podcasts, poetry readings and writing workshops.

This summer, she launched “Fire Thieves,” which encourages artists to organize poetry readings within their communities—and like many of her artistic ventures, stresses the importance of creating and supporting living artwork.

“We have a serious series of problems that stem from not being a cohesive community and the way you create cohesive communities is by participating in artwork together. It is one of the hallmarks of culture,” she said.

A devoted SFUSD volunteer of 20 years, Shuck has seen the Mission District in various incarnations—its beauty and history, a place she calls home. But with the influx of new people and development in the area, she understands the fear of displacement among longtime residents living in an increasingly gentrified neighborhood.

Despite all of that, she remains hopeful for San Francisco, as there are determined bodies prepared to take the reins and preserve the city.

“I see the heart that’s still here but we must keep it cultivated because we lose things every day if we are not being mutually supportive,” she said.

The fight for equity takes work. It’s a battle Shuck has known for decades but one she believes can be achieved if championed by people from all generations.