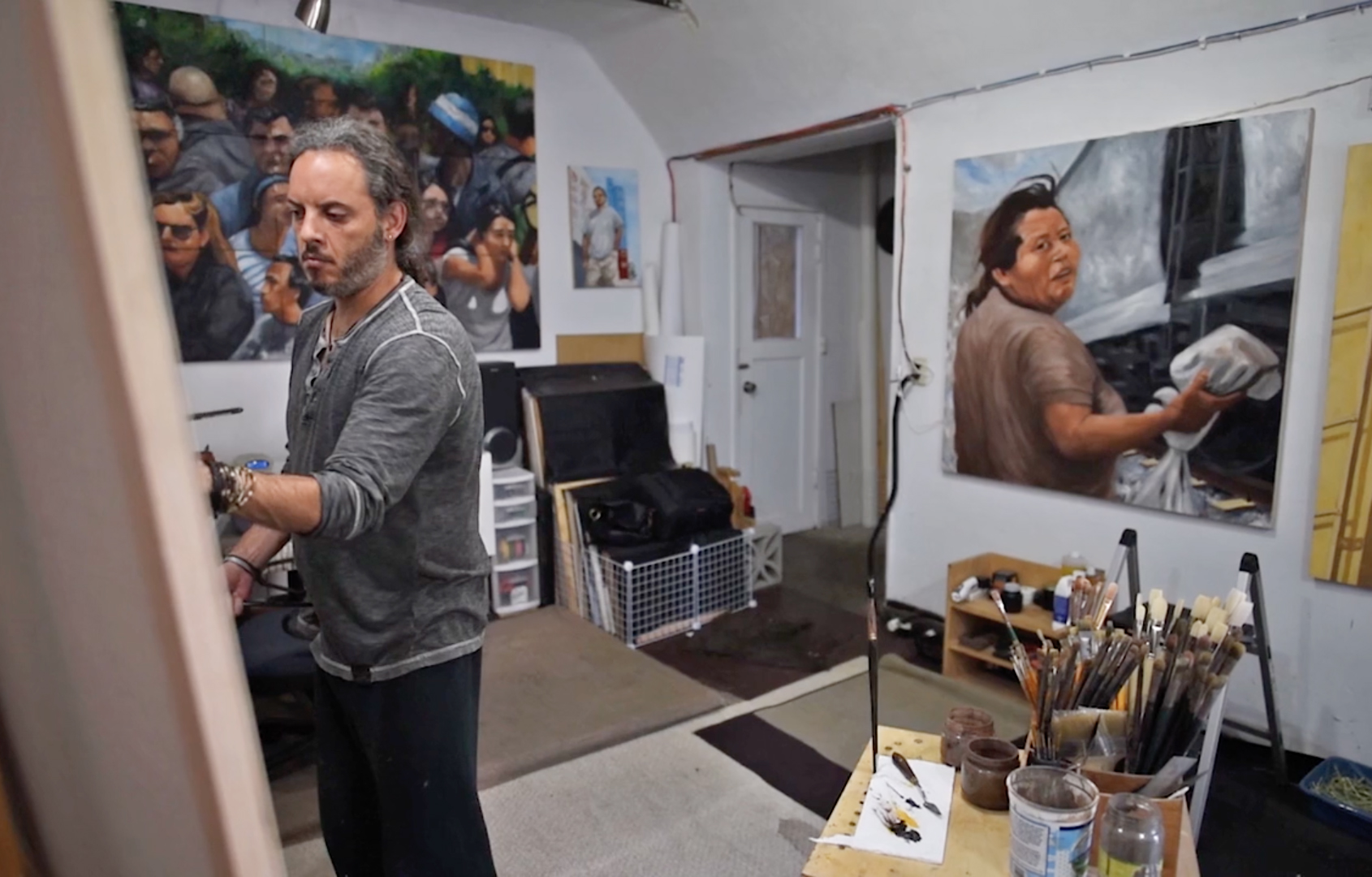 Julia, the rabbit from Peru, hops around the garage converted art-studio that is her home. The long white and gray fur of her ears, feet and nose advances slowly toward the wooden easels. Above her are an abundance of oil paintings. She doesn’t know who the people in the paintings are, she isn’t aware of their stories, but they surround her. They carry packs of belongings on their backs and their children in their arms. The pain on their faces reflects the struggle of their journey on the coarse cloth.

Her “dad,” Claudio Talavera-Ballón, sits near the paintings at his desk. Talavera-Ballón, 45, is the artist behind the looming pieces that live in the studio, home to Julia. The lights shining from the ceiling illuminate every inch of the studio. Painted canvases cover the floor stacked against the walls, lying next to the table holding a multitude of brushes he has ready on hand in the center of the room. In his studio he re-creates the faces he’s photographed along his travels while Julia hops around.

“For me, painting is like eating lunch,” Talavera-Ballón said. “I’ve painted since I was a child.”

On Oct. 1 these series of paintings titled, “Somos Tierra Que Anda – We are Earth that Walks,” will exhibit first at Eastside Cultural Alliance in Oakland until mid January, a show that was inspired after Talavera-Ballón and his wife Mariela traveled to Mexico in November 2018, right when a Central American migrant caravan was heading north.

The couple got in touch and volunteered with Las Patronas, a group of women in the state of Veracruz, Mexico who feed migrants traveling atop of “La Bestia,” the notorious train that travels through in their town, La Patrona, without stopping. They pack lunches of beans and rice, tossing them to hungry migrants as they pass with arms outstretched.

“We are living in some very hard times,” Mariela Talavera Ballón said. “Through these paintings, we are dedicated to raising awareness, we want to show that migrants are people who have hopes and dreams.”

The exhibit will display next at the Asian Resource Center in Oakland and make a final stop at Sacramento State for the Multicultural Educational Conference starting in April. Talavera-Ballón started the series as a testament to the people fighting adversity and the social issues that plague them. The plight of the migrant caravan inspired him to travel and speak to them about their journey, and got their permission to photograph and paint them. Talavera-Ballón focuses on social justice issues in his paintings to create consciousness in the United States.

Seven years ago, he moved to San Francisco from Peru to be with Mariela, a longtime resident of the Mission. Talavera-Ballón, a man with long peppered hair tied in place, was attracted to the Mission for its Latino roots. When he speaks his animated hand gestures display the Indigenous bracelets that cover his wrists. Living at 25th and Guerrero streets, Talavera-Ballón often welcomes visitors to his studio. Becoming a professional fine artist had never crossed his mind growing up in Arequipa, Peru, where he was born and raised. He lived a privileged life distant from that of the people he paints.

When he was two, his parents divorced and he began to ask his mother questions about his father. His mother and grandmother encouraged him to express himself through art, a past time that distracted him in school. Growing up he heard stories of the famous artist Luis Palao Berastain, who lived in the hills of Calca, a village in Valle Sagrado, which is over 200 miles from Arequipa.

“All my life I lived in the shadow of this painter,” Talavera-Ballón said. “My mother always told me stories about him, this famous painter in Peru, everyone talked about Palao.”

The conservative high-society he lived in didn’t consider being an artist to be a respectable profession. In college he studied graphic design, done by hand before computers, which took all night into the early morning to finish. The uncertainty of being a graphic designer grew when publishing agencies rejected him, soon after he started his own graphic design agency. But the realization that his clients controlled the outcome of his work dimmed his motivation for art.

One fateful day, Talavera-Ballón crossed paths with the legend himself, Luis Palao Berastain, who also happened to be friends with Talavera Ballón’s mother. He got the courage to show his artwork to Paola, who offered to take him under his wing to study fine art. However, Talavera Ballón, then 25, would have to live in Calca, where Palao painted campesinos and the Quechua people. Total devotion and discipline were the conditions his mentor set for him to learn the skills needed to paint people and still life in changing light.

“Faces have always caught my attention. Faces and the human figure, for me that is watercolor come alive,” Talavera-Ballón said.

Studying under Palao meant that he would be immersed in the medium of watercolor. An invitation to exhibit his work in 2006 required oil paint, a foreign medium to Talavera-Ballón. He’s been hooked ever since. Through time he’s crafted his own style of fine art, but Palao’s influence can still be sensed in his artwork.

During the four years he lived between Calca and Arequipa, Talavera-Ballón entered a world different from his own. As a city boy he was not aware of how the other half lived in Peru. In Calca he met and befriended campesinos and Quechua people who were more hospitable to him than his high-society friends in the city as well as valuing his work as an artist—so much so that they would kill a chicken to feed him lunch. He experienced great generosity and understanding from people with little means who’ve been discriminated against for centuries.

“I began to realize that these people are the ones worth painting,” Talavera-Ballón said. “I began to see wisdom in the elders. You have to preserve that wisdom in a painting.”

This shift in perception is a credit to the foundation of his artwork. While living in Peru, Talavera Ballón had a gallery showing in Cusco, where his future wife would buy one of his paintings. Originally from Buenos Aires, Argentina, Mariela graduated SFSU’s TESOL (Teachers of English to Speakers of Other Languages) program and became an instructor for teachers. The move to San Francisco proved to be a culture shock for Talavera Ballón, as he was accustomed to painting campesinos who lived off the land.

Life has many colors

Disillusioned with the environment he was in, he began to walk the streets of the Mission. He recognized then that the people he saw in the community were the children and grandchildren of campesinos, all of whom face similar discrimination in the United States, but with an undercurrent fear of deportation.

“I started painting the migrants who are here in the Mission. The idea at that time was to make large formats because I wanted them to be seen,” Talavera-Ballón said. “They are doing a lot for this country because they have to be in the shadows when they do the work that nobody else wants to do.”

Both husband and wife share an affinity for helping marginalized communities.

On their recent journey to Mexico, they volunteered at the Hermanos en el Camino, migrant shelter in Oaxaca. After being coaxed to paint a mural at the shelter, they made the design in collaboration with the migrant children. One of them came up with the title, “La vida tiene colores para ti,” (Life has colors for you) for the mural of a hummingbird and flowers representing their respective countries.

Talavera-Ballón considers it a gift that he is able to contribute and provide happiness to people that would otherwise fall in despair. Talavera-Ballón has collaborated with Alejandro Palacios, a filmmaker who showcased Talavera-Ballón’s series about Las Patronas at the Community Media Center of Marin.

“The openness to share his skills and knowledge…is the key to growing and learning and improving,” Alejandro Palacios, 35, said after seeing the mural for the shelter. “That’s why it’s important what he’s doing.”

In the shelter they met an 18-year-old girl named Sinthia who walked with her family from Honduras to Mexico until her shoes fell apart. They fled Honduras one night when gangs came to kill them. With no time to gather their belongings, Sinthia and her family jumped out the back window, still in pajamas. Claudio and Mariela took Sinthia to the market to buy whatever she desired. She chose one Snickers bar—she had never had one before—and divided it with the rest of the refugees.

Hearing the migrant’s stories of violence, intimidation and fear, motivated them to impart those stories in the United States. He included these experiences in lectures at Portland University and Cal State L.A. Their voices are now added to the series “Somos Tierra Que Anda – We are Earth that Walks.” From DACA recipients to Las Patronas, Talavera-Ballón lifts the voices of immigrants and marginalized groups that continue to face persecution. For now, he hopes that the faces he painted will restore empathy for human life in countries that have turned their backs to the world’s most vulnerable populations.

“It’s a human right that everyone has,” Talavera-Ballón said. “The right to a decent life.”