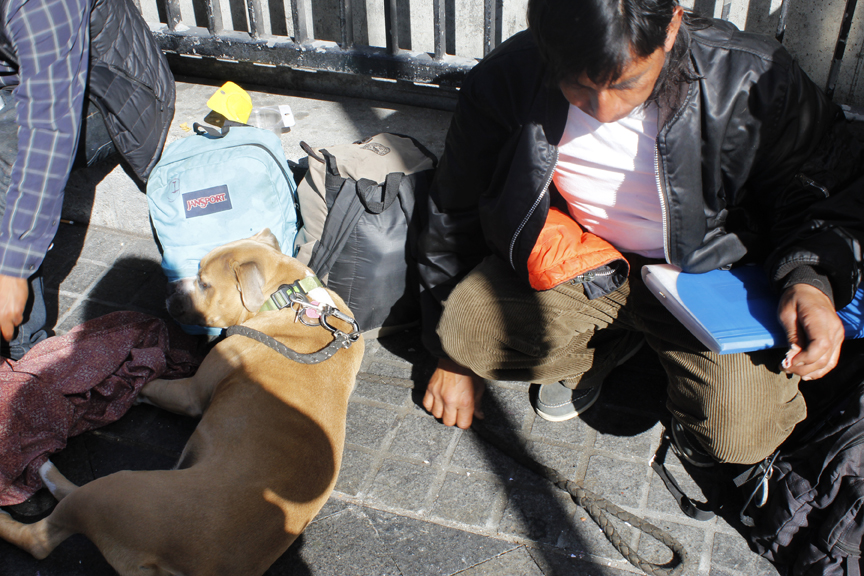 “There’s not enough room for everybody,” said 49-year-old Edwin Mus, who is known by his fellow homeless neighbors as “El Vampiro.”

Mus, originally from Guatemala, is a homeless man who has lived in the Mission for over eight years, and has been homeless six of them.

Mus used to have a family and a job, but after being stopped for a DUI and unable to pay for his $8,000 bail, he was jailed. His money and personal troubles led his wife to leave him.

He eventually found a loyal companion in his dog “Cabezon,” whom he met while dog sitting trying to earn money for food. They’ve been together since. But finding a shelter has proved difficult due to overcrowding and shelter regulations that prohibit animals from entering. Mus would rather sleep on the street than leave his dog for a warm bed.

“I can’t be without the dog. He’s the only thing I have,” said Mus. “He is the only one that makes my life happy. He is attached to me and I am attached to him too.”

The San Francisco Point-in-Time Homeless Count has noted that despite efforts to solve the homeless problem, the city’s general homeless population actually rose slightly between 2005 (6,248) and 2015 (6,686). And in San Francisco, immigrants and people of color who are homeless have less access to housing and shelters.

Section 214 of the Housing and Community Development Act of 1980 states that only certain categories of noncitizens are eligible for benefits under the housing programs. The Personal Responsibility and Work Opportunity Reconciliation Act of 1996 (PRWORA) also states that undocumented people, unless they are “qualified aliens,” are not eligible for federal public benefits. Immigrants have faced extreme marginalization with laws that prohibit their eligibility for housing programs.

PRWORA coined the term “qualified alien” to differentiate noncitizens, who can receive federal public benefits from those who are prohibited.

The director of Homeless Services at the Mission Neighborhood Health Center, Laura Guzman, has been an advocate for immigrant homeless in San Francisco for more than a decade. Guzman has served as chair of the only shelter that offers housing for Spanish-speaking immigrants with limited access to shelters or subsidized housing from other organizations.

She says recent San Francisco propositions “Q” (which made tents on city sidewalks illegal) and “R” (which failed, but would’ve created an SFPD Neighborhood Crime Unit to respond to “quality of life” crimes, including homelessness)  only meet the needs of the wealthy in the city, and ultimately won’t resolve the city’s homeless problem.

“The neighbors that are pushing for some of these initiatives are the very people that will not allow you to build housing or shelter,” Guzman said.

There are about 900 people currently living in encampments for whom there are no shelter beds according to Guzman.

Mus explained how he and a couple of his friends came to live in a tent in the Mission this year near 15th street, and how police forced them out of their tent.

“They came in at around 5:30 in the morning and threw everything [out],” Mus said. “They took everything from us. They threw all our dishes and clothes to the trash. That hurt me the most.”

Paul Boden, executive director of Western Regional Advocacy Project (WRAP), argues that the system of laws encompassing homeless immigrants and minorities are structured to criminalize people that fit both categories. He agrees that the system cannot resolve homelessness through the removal of tents.

Boden thinks these laws are designed to make residents believe that over time, homelessness will no longer be a problem because they aren’t able to see it anymore.

“You can’t have a discussion around homelessness without talking about racism, criminalization, [and] class,” said Boden. “This is that liberal pretense that ‘neoliberalism’ promotes so much. It’s: ‘We’re going to make the person you see today disappear and once that person has disappeared you’re [the community] going to figure we fixed the problem.’”

WRAP’s report “Without Housing,” which Boden presented, found that the department of Housing and Urban Development’s (HUD) budget authority was cut by 77 percent from 1978 to 1983. Since 1983, there has been a significant increase in laws criminalizing homelessness in California. The main “offenses” that homeless people are being targeted for are sleeping, sitting or lying down and loitering.

Despite his difficulties, Mus continues to search for ways in which he can provide a better life for himself and for his companion dog.

“I’m fighting to move ahead. I’m always working anywhere,” Mus said. “Thank god right now I’m not missing much, only a roof over my head for the cold nights.”

A day in a homeless encampment