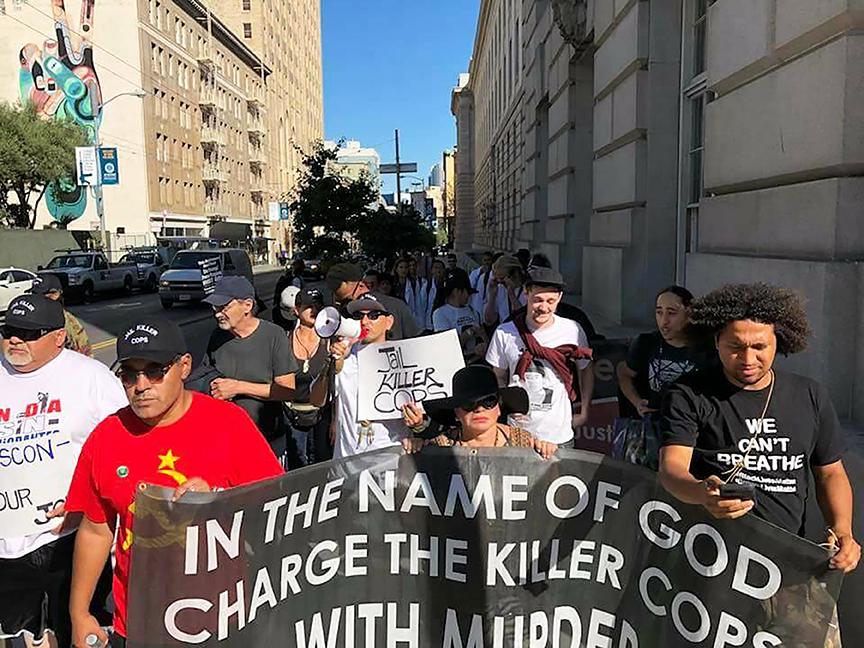 Long before the fatal police shooting of Stephon Clark and long before California Attorney General Xavier Becerra announced that the California’s Department of Justice would review the policies and practices of Sacramento’s Police Department, a group of San Francisco activists marched from the city to Becerra’s Sacramento office to demand that he prosecute San Francisco police officers involved in fatal questionable shootings.

The activists participating in what they dubbed the “March for Justice” had decided to confront Becerra after San Francisco District Attorney George Gascón’s refused to charge the involved officers. Upon completing their 14-day, 95-mile march on Oct. 18, 2017, however, Becerra was a nowhere to be found.

“There is no excuse,” Victor Picazo told El Tecolote on Nov. 8, 2017, a day many of the marchers decided to meet and talk about their action. “He knew we were doing this march and the day we were arriving, but he decided not to speak to us. He shut down the building that day.”

Although they were unable to meet with Becerra, the Attorney General’s absence didn’t discourage the marchers and their protest.

“I knew it would happen, just like I knew these cops wouldn’t be convicted,” said Larry Dorsey, one of the marchers who is also a comedian. “White Supremacy has no rules, but enforces its rules on others.”

On Oct. 6, 2017, the marchers held a press conference at San Francisco’s Hall of Justice before setting foot towards Sacramento, sharing speeches from family members of those killed by police.

“It’s going to take people power,” Sato said during the press conference. “It’s going to take all of us together to show them that we really care about our people and our community. It’s not up to the supervisors or the police commission or the mayor. If we want to see change, it’s up to us to hold the police accountable for premeditated murder.”

The family of Alex Nieto has stood in solidarity with the groups Black and Brown United and Mothers on the March every week since those groups were founded in 2017.

“Today we find ourselves reunited here because we will begin our journey to walk to Sacramento,” said Refugio Nieto, Alex Nieto’s father. “Like most of you know, this is going to be a very long walk, but it will be very positive. We are asking Attorney General Xavier Becerra to help us with this problem we have here.”

Many of the marchers wore shirts with images of victims killed by police, or shirts with quotes pleading for social justice.

“I felt it could cause some misunderstandings with law enforcement, which it did,” said Dorsey. “But not to an extreme extent. And this is all connected to the spirituality of the march.”

During their journey, the marchers held meetings in churches and community centers in every town they stopped. Their initial plan had them walking to Mill Valley, San Rafael, Petaluma, Novato, Sonoma, Napa, Fairfield, Vacaville, Dixon and Davis before arriving in Sacramento.

But their march coincided with the devastating Northern California wildfires, which produced the worst air quality in the state’s recorded history. Those hazardous conditions proved difficult for the marchers, forcing them to reroute.

Marcher Mike Evans Jr. was hospitalized and the rest of the group was asked by supporting UCSF doctors to wear masks and bandanas to protect them from smoke. Those helping the marchers were the Do No Harm Coalition (DNHC), a group of UCSF physicians, nurses, students and staff members who are committed to ending racism and state violence.

The group decided to reroute and march around the fire, which gave marchers an opportunity to do some community outreach outside retail stores. But these moments also prompted a few ugly encounters with racism.

“There was a White guy who made a gesture like he was going to hit Cristina, and all hell broke loose after that,” said marcher Ike Pinkston. “But the good outweighed the bad. In some meetings after, we were talking about how we need to go back to those communities and do more outreach and help them get started on their own.”

Although the fire did discourage some from participating in the march, Gutierrez said it was for the best.

“In all my years here, I have never seen racism so alive. It’s obvious who’s racist and I was glad to have been attacked because it shows who they really are,” she said. “We are raising awareness on an issue that needs more recognition. But we were very disciplined. It was best we didn’t add any other marchers because of safety issues. We didn’t want to be responsible for people being harmed and just wanted to focus on the march.”

Nearly six months after the march, the fight for justice continues. Mothers on the March has joined forces with the Justice4Luis coalition to put pressure on Gascón either to charge the officers involved in the killing of Luis Gongora Pat, or resign by April 25.

According to members of Justice4Luis, when Gascón met with them in late February, they extracted a promise from the District Attorney that he would make a decision about whether or not to charge Sgt. Nate Steger and officer Michael Mellone, for the death Gongora Pat more than two years ago. Coalition members are hoping they can hold Gascón to his words.

SF Rapper and activist Equipto continues to lead by example