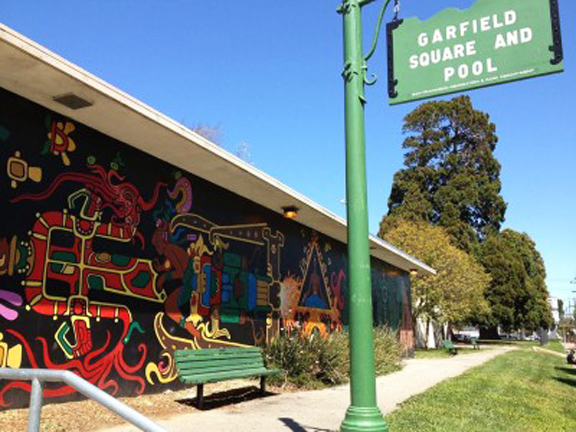 Throughout the Spring of 2015, students enrolled in the Journalism 575 Community Media class at San Francisco State University worked on a semester-long project in conjunction with El Tecolote titled “Growing up in The Mission.” The class was spearheaded by journalism professor Jon Funabiki, executive director of Renaissance Journalism at SF State. His students conducted interviews and reported on the neighborhood, to find out what it means to grow up in the Mission. This is part two of a three-part story on parks in the Mission District. (read part one here)

Founded in 1884, Garfield Square, is situated in the south-central portion of the Mission District, flanked by houses ranging anywhere from 10 to 80 years old.

Primarily used for soccer and calisthenics, Garfield Square caters mostly to children and their families, but also features gatherings of teenagers on occasion.

After normal operating hours—sun-up to half an hour after sundown—Garfield Square is home to individual or bands of alcohol-consuming transient men.

“I’m here walking my dogs earlier in the morning and I seem to wake up the drunks who hang out on the bleachers,” said Sara Martin, a resident of the surrounding area.

But by and large, the square is an asset to the community and is now home to the Police Activites League (PAL), which organizes athletic events for the community.

Once PAL is done with the field, other pay-to-play leagues use the synthetic-turf field.

“We moved here from the Richmond,” said Estrada. “Ever since, we have been coming to Garfield Square for soccer practice.”

In addition to facilitating soccer games, dog walking, and the enjoyment of the occasional burst of sun, Garfield Square is an important part of the experience of growing up in the Mission.