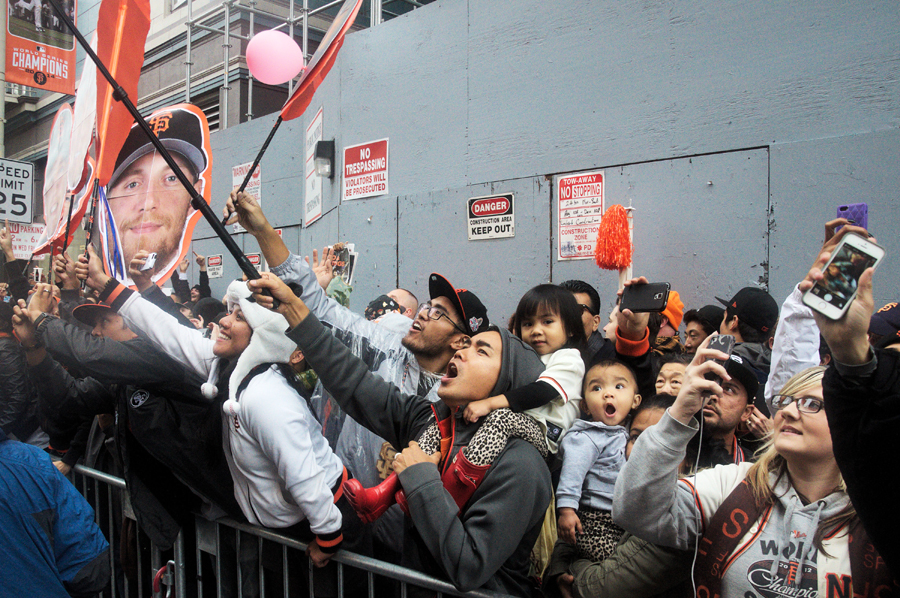 Too often relegated to the ranks of mere entertainment, sports yield special power. An athletic competition can elicit both euphoria and agony. The combatants feel it, as do the fans who cheer, and jeer, them on. But what transpires on any given playing field can and has oftentimes infiltrated other more meaningful realms. Whether it’s five players with the St. Louis Rams National Football League team marching onto the nationally televised gridiron giving the “Hands up, don’t shoot” salute, or a community found polarized over a soccer game that didn’t happen on a Mission District playground, sports matter. From the World Series to the Washington D.C. football team, here is how El Tecolote covered sports in 2014.

Giants Dynasty
Amid a maddening final stretch of the 2014 MLB season, which saw the vile Los Angeles Dodgers claim the National League West crown, El Tecolote had an exclusive sit-down interview with former closer—and reformed Dodgers fan—Sergio Romo of the San Francisco Giants. In the piece “From the border to the big leagues: a profile of Sergio Romo,” which ran exclusively online on Sept. 18, El Tecolote Editor-in-chief Alexis Terrazas explored Romo’s past and politics, inquiring about his memorable 2012 T-shirt “I just look illegal,” his tough upbringing in Brawley, California and his take on the thousands of Central American children detained at the U.S.-Mexico border.

And not two months after that story ran, the Mexican-American Romo became a champion again, after his Giants claimed their third World Series title in five years. Unfortunately, reveling fans took to the streets to celebrate and mayhem ensued. In “Foul Play: Celebrations turn ugly as Giants win third championship,” which appeared in the Nov. 6-19 issue, Terrazas quotes police chief Greg Suhr: “To the clowns, that came to San Francisco to act out, I guess you just don’t know what it’s like to have a good time without being a jerk.” Photographer Santiago Mejia was there to capture the foolishness that night, and photographers Shane Menez and Alejandro Galicia captured the parade two days later in all its euphoria.

Boxing
Boxing has a brutal way of granting—and dashing—dreams. In “Bout time: Longtime trainer and local prospect chase boxing dream” (July 17-30), Terrazas profiled local boxer Jonathan Chicas and his upcoming showdown with Emmanuel Robles. The story also examined Chicas’ grizzled trainer Oscar Rivadeneyra and how together, the duo planned to chase down the elusive boxing dream of a world championship. Boxing writer Alfonso Garcia covered the fight, and in his online story “Unlucky punch: Knockdown proves costly as local boxer loses biggest bout” that ran on July 24, Garcia painfully describes how a single punch can be the difference between winning and losing.

In the Aug. 28-Sept. 10 story “Local boxing show gives girls a fighting chance,” former kickboxer Blanca Gutierrez and former women’s heavyweight champion Martha Salazar train young women for the annual “Beautiful Brawlers” event, an all-female amateur boxing card that featured some of the best female fighters from around the country. Salazar and Gutierrez both shared the pain of never getting an opportunity, but how that pain motivated them in working to better the boxing futures of younger women today.

Washington Redskins
It was far from being just another football Sunday. Because whenever, wherever, that football team from Washington, D.C. played, real Native Americans have followed—and demanded change. In the Dec. 4-17 story “Hundreds demand ‘Redskins’ name, mascot change,” Terrazas writes about the rally outside Levi’s Stadium in Santa Clara the day the San Francisco 49ers hosted Washington. Hundreds of people rallied and marched that day demanding that owner Daniel Snyder change his team’s name and mascot, which has drawn the ire of Native Americans for decades. “Why are we the only mascot of the ethnic groups?” asked Bill Means, an Oglala Lakota activist from South Dakota. “Sambo is gone. Frito Bandito, he’s gone. But yet we still have this Washington football team mascot.”

From the border to the big leagues: a profile of Sergio Romo