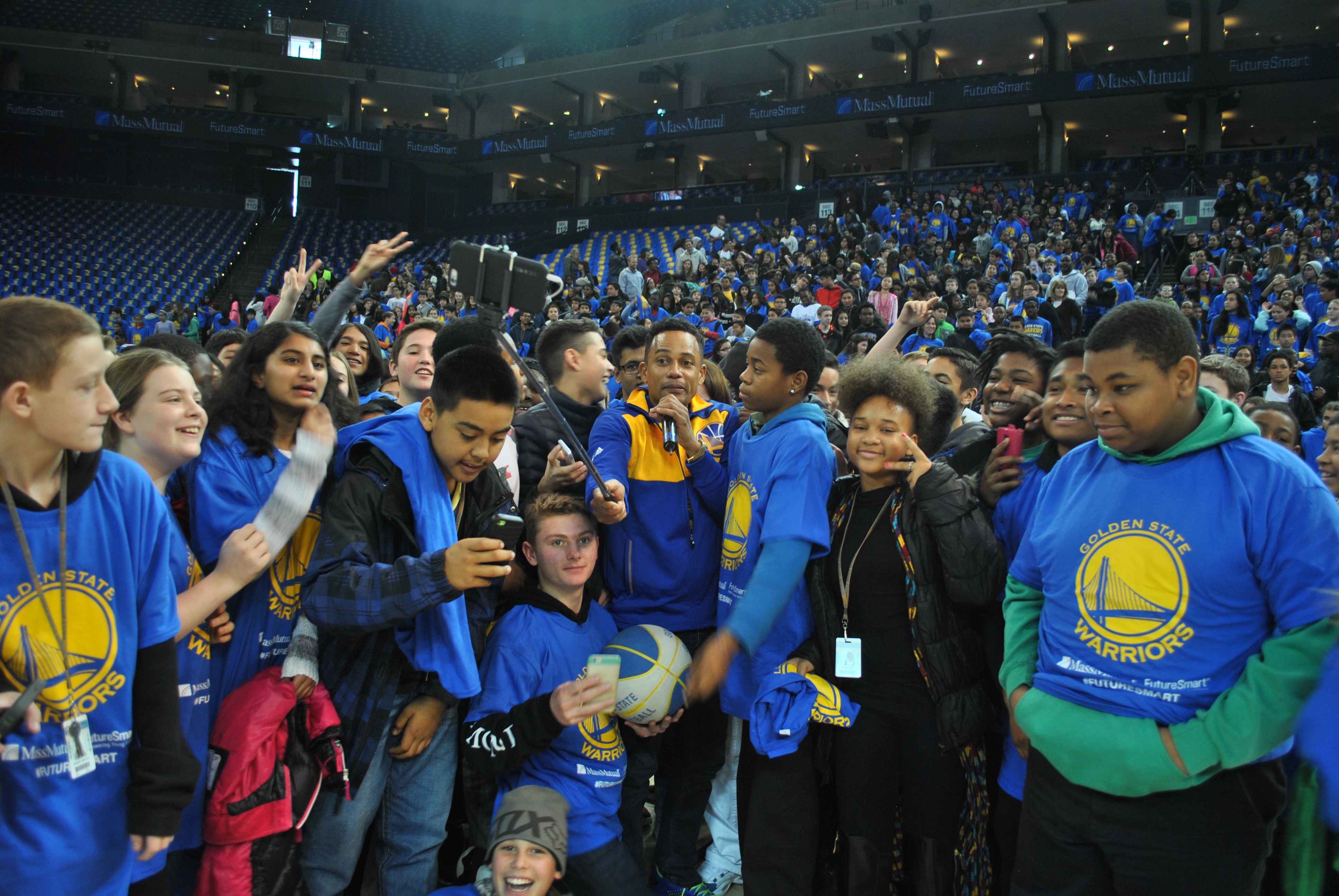 Oracle Arena was loud and energetic—the way it usually is when the Golden State Warriors take the court—as 1,700 students from all over the East Bay filled the seats of the sports arena.

“FutureSmart Challenge is really geared towards getting to kids early and providing them the tools to think about their futures,” said MassMutual Vice President Nicholas A. Fyntrilakis. “Today we have about 1,700 middle school kids here to partner with us and the Warriors and talk about financial education, careers, the importance of their education and to build a plan for their future.”

The two speakers at the event were welcomed warmly and loudly with chants and applauses. Actor Hill Harper, who stars in the television series “CSI:NY” and was recently in the movie “Concussion,” along with former, beloved Warrior Adonal Foyle, took the court to speak to the multitude of youth about the importance of having an education and saving their money.

The theme of the event was about how to use money as a tool to help students achieve their goals.

“If you use money correctly it could be very effective,” said Harper. “If you use it the wrong way it could actually do more damage in your life than good.”

The students listened attentively as Harper spoke, walking up and down through the aisles of the arena as he asked students important questions about what they had learned from his lesson. After the students answered, he handed them each a bill.

“We don’t have financial literacy taught in our curriculum, particularly within our public school system, so we have to figure it out,” said Harper. “MassMutual has been so amazing, the Warriors have been incredible and Junior Achievements, so it’s a partnership to bring that curriculum into the schools.”

Midway through the event, Harper introduced the Warriors fan-favorite Foyle at center court. Many of the kids pulled out their smartphones for a picture of the 6 foot-10-inch former center, as he took the microphone.

“For me, one of the things about money is habits,” said Foyle. “The earlier you learn to save, the easier it gets later in life. I wish I knew that when I was younger.

“It’s really amazing to see kids so excited about financial literacy and really feeling comfortable about the future and what they want to accomplish,” Foyle continued. “I was impressed. I’ve always felt that I wish there were people in my life that helped me to be more aware financially when I was younger. So I’ve always believed that there’s this important thing, that we have to pass the baton to the next generation, and make sure that they have as much equipment, skills and tools [as] are necessary for them to be successful.”

MassMutual has contributed almost $2 million towards FutureSmart challenge. In 2014, 20,000 students benefited from the FutureSmart Challenge, and according to MassMutual, it’s estimated that in 2016 an additional 10,000 students will also benefit from the program.