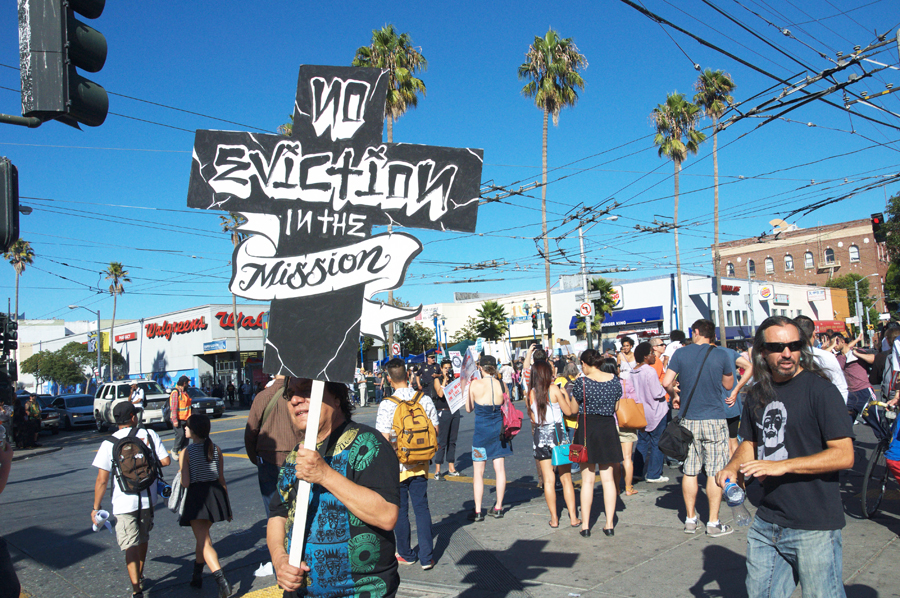 Protesters in the Mission District rallied on Oct. 4 to mark the one-year anniversary of the fight against a proposed market-rate development at the 16th Street BART plaza, an area where the Mission’s low-income and homeless have found sanctuary for many years. Activists and locals fear that the project at 1979 Mission Street threatens to displace the neighborhood’s historically working-class and minority residents.

“Because of the most vulnerable people that live in this area, we cannot allow this development to be approved by the planning department,” said Roberto Hernandez, founder of Our Mission No Eviction campaign and an organizer of Saturday’s rally.

The demonstration, called “No Monster In The Mission: Basta Ya!” and organized by members of the Plaza 16 Coalition, started at 2 p.m. at 24th and York streets with around 500 marchers. Led by the local youth drum corps Loco Bloco, the protesters marched across 24th Street, turned down Mission Street toward the plaza, and held a rally filled with speeches, live music and free food.

In October of 2013, Maximus Real Estate Partners, LLC, announced plans to build a three-tower, 351-unit, high-end luxury condo development adjacent to the 16th Street BART plaza, and initiated the process to acquire approval from the planning department. In response, more than 50 community organizations have united under the loose banner of the Plaza 16 Coalition and have pledged to oppose the project.

“If it does get approved, then we will contest it and appeal it to the board of supervisors,” said Hernandez. “We believe that we have enough votes on the board to kill this project.”

Others in the Mission, however, are not so certain.

“Many of us always had the dream that 16th Street could not be gentrified,” said Laura Guzman, director of the Mission Neighborhood Resource Center (MNRC), a homelessness advocacy organization located a few blocks from the plaza. “We always thought that they would not dare come to our neighborhood. We were wrong.”

Originally from Buenos Aires, Guzman has pursued legal aid and social justice work in the Mission for more than 20 years. For her, part of what makes the Mission unique is its diverse racial, ethnic and socioeconomic background, and in particular its deep Latino immigrant roots. But developments such as the Maximus project, she believes, pose a threat to the cultural identity that has existed in the Mission for decades.

“The Mission is a neighborhood of refuge for immigrants,” she said. “Whether they’re documented or not, they feel safe in the Mission. With this new upsurge of people that are clueless about our histories, the culture of Latino richness—the sabor that we love—is going to be gone.”

The Mission’s reputation as a welcoming space for low-income immigrant workers has also attracted a large homeless population. As director of the MNRC, Guzman keeps in close contact with the community of poor and homeless people that congregate daily in the 16th Street BART plaza. She worries that the 1979 development will worsen the situation for the homeless and drive many of them further down Mission Street.

“They’re going to be the most deeply impacted because they’re already impacted,” she said. “They don’t have any place to go, especially immigrants that came from Latin America and are still homeless. It’s going to increase their desperation and suffering.”

Guzman and her colleagues in the Mission suspect that the 1979 project will continue to intensify the police presence surrounding the plaza. Likewise, the homeless themselves have already begun to feel the effects of stricter police enforcement in the Mission.

“BART police just gave me a $250 ticket for evading the fare and loitering,” said a man named Joaquin, who has been in the plaza for three years. “We’re going to get moved out of here. They’re going to move us with tickets or jail.”

As an epicenter of San Francisco’s poorest residents, the 16th Street neighborhood also hosts the densest cluster of low-rent single room occupancy (SRO) housing in the Mission. Activists predict that SRO owners will evict low-income tenants and cater their properties instead to tech workers as real estate values near the plaza rise due to the creation of market-rate developments like the Maximus project.

“We’re seeing that more and more of the SRO owners are trying to spruce up the units and reserve them for high-income renters,” said Kendra Froshman, outgoing coordinator of the Mission SRO Collaborative. “If a lot of people lose their SROs, then they’re going to out into the streets.”

Evicted SRO tenants will join the surge of newly homeless people currently migrating from SOMA and flooding the Mission. As a result, Guzman and the MNRC have been seeing not only more homeless people, but newer faces as well.

“As it is, it’s horrendous,” she said. “What we’re seeing now are new people coming into homelessness. And there’s only one way that they can get over this: it’s called a house. There’s nothing else.”