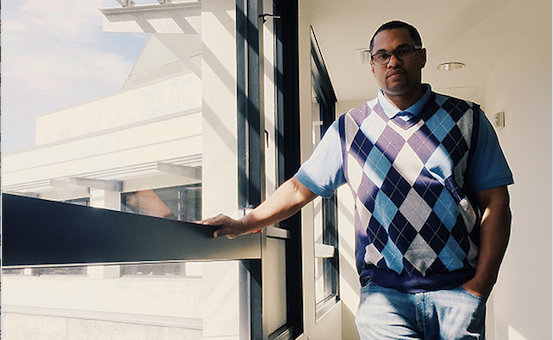 Art for Free! Come and get it!

Editor’s Note: This article is a project of the Latina/Latino Journalism class taught by Katynka Martinez at San Francisco State University.

Ask Jared Walker how long he’s served time in prison and he gives you an exact number: 1,005 days.

That number was one he calculated many times in his head while incarcerated; It’s a number that he says stays with him.

“I woke up in prison a thousand times, and you don’t forget that,” he said.

Just two weeks after his 21st birthday, Walker was sent to serve time at the Deuel Vocational Institution in Tracy before later transferring to California Men’s Colony in San Luis Obispo. While in prison, he met a man on the yard named “Blaze” who, in passing, told Walker about a program designed to help matriculate formerly incarcerated people to college. When he was released after serving three years, Walker visited the program known as Project Rebound at its San Francisco State office.

Founded in 1967 by sociologist John Irwin, Project Rebound helps former inmates get an education to avoid recidivism (returning to prison), by reducing the barriers many face upon trying to reintegrate into society. This includes helping to navigate the financial aid process and even assisting with basic needs such as food and transportation.

“About half the people I was in prison with were doing life,” said Walker, 26. “So I saw that, and I said, ‘I can’t ever let that be me,’ and so I really was driven to go out and succeed.”

And succeed he did. In May, Walker became one of about a thousand formerly incarcerated students to graduate from San Francisco State with the help of Project Rebound. He graduated with a degree in finance and now works as a data specialist for the program, which is now expanding to seven more California State University (CSU) campuses to provide formerly incarcerated people across the state with the same opportunity to obtain a degree.

“Initially my wildest and most ambitious idea was I thought we could get maybe three different locations,” said Jason Bell, Project Rebound’s regional director. “I said, ‘If we could do that, we’d really be helping out and really be covering some bases that needed to be covered.’”

“The big thing I always argue with this whole energy toward what they call ‘reentry’ [is]: you cannot do any of that successfully without education,” said Bell, who himself went through Project Rebound at age 30 after serving a 10-year sentence at San Quentin State Prison. He graduated with a master’s degree in sociology and counseling.

Was The Novel Coronavirus Really Sneaky In Its Spread To The U.S.? Experts Say No

Rebound’s expansion was in part funded by the Renewing Communities Initiative under the nonprofit Opportunity Institute, which committed $500,000 to the expansion Bell said.

With California’s passage of Proposition 57, state prison officials can reduce the sentences of inmates who behave well and participate in educational programs. Bell said the program’s expansion will provide much-needed opportunities for what he says will be an “influx of folks who are going to be resentenced.”

And according to a 2013 report by the RAND Corporation titled “Evaluating the Effectiveness of Correctional Education: A Meta-Analysis of Programs That Provide Education to Incarcerated Adults,” education is the most cost effective tool for reducing recidivism rates. The study found that inmates who participate in correctional education programs have 43 percent lower odds of returning to prison than those who do not.

Now, Bell says his job is to make sure that key components at the heart of the program’s original mission are implemented at the new locations. That includes hiring formerly incarcerated people to run the program themselves—people like Walker.

“You can’t understate how valuable [Project Rebound] is for somebody like me,” says Walker. “You need people who are really gonna be like, ‘Hey, you can do it—get in there and we got your back whatever you need.’ You gotta have people like that, [and] Project Rebound provides that.”

Open letter to SF State: What’s the protocol when one of your students is tragically killed?