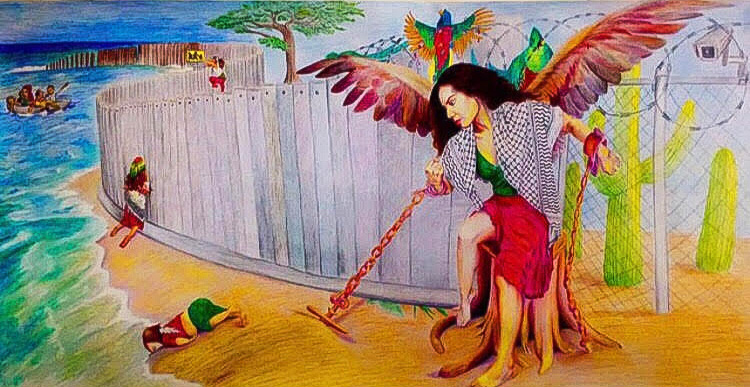 Branching off 24th Street in the Mission are alleyways filled with colorful murals and engaging graffiti tags. Balmy Alley and Clarion Alley rotate the work of artists depicting local and international issues. The sides of buildings are covered in these depictions of culture, identity, current events, neighborhood and city history and solidarity.

Among these murals are strong visuals of children fighting with soldiers, walls being destroyed and commentary on struggles related to the U.S.-Mexico border.

Mission artist Lucía Ippolito conveys a more global perspective of the border crisis, showing solidarity with international struggles in her 2015 colored pencil work, “Borders.” Ippolito says the work is intended to connect Palestine, Mexico and Syria, as each community deals with different refugee and migrant crisis.

The colors in the piece pull from the flags of Mexico, Syria and Palestine. Depictions of Mexican culture and the U.S.-Mexico border are the immediate background, behind a Palestinian woman in chains. The people portrayed are pushed forward by the changing wall that winds through the piece and turns from barbed wire with a security camera to the tall concrete of Israel’s separation wall and lastly into a wooden fence that continues into the ocean, where a raft of Syrian refugees approach.

“I was trying to connect these topics,” Ippolito said. “As human beings, I feel we are going to look back on history and look how we treated the most vulnerable amongst us.”

Ippolito’s piece was recently included in “LA FRONTERA: Artists respond to the U.S.-Mexico Border,” an exhibition at the Jewish Community Center (JCC) that focuses on themes of global turmoil, migration and border issues. The exhibit, which opened April 25, runs until September 2019.

However, shortly after the show’s opening, Ippolito’s work was removed without notice and she only learned of the censorship after her work was taken down. She decided to withdraw entirely from the show, feeling since her piece was removed, the goal of the exhibit to generate dialogue was sidestepped.

David Green, JCC’s Chief Program Officer for Roots & Culture, wrote in a statement and apology that Ippolito’s work, and an additional work by artist Christo Oropeza, were removed after complaints that the works depicted violence toward children. Though the Katz Synder gallery holds regular shows, it isn’t a dedicated gallery space, having work hang next to classrooms and in the walls across from an outdoor playground.

After discussions, Ippolito said she was eventually asked by the curator of the exhibit, David de la Torre, for a replacement piece, specifically about the U.S.-Mexico border. This request confirmed Ippolito’s belief that her work was censored due to its portrayal of Palestine, in addition to concerns showing a dead child.

In lieu of a request for a replacement work, Ippolito offered to have her public statement about the censorship of her work displayed, though due to a delayed response from Green she has not provided it as of yet.

Several artists, who are part of the show, have written an open letter condemning the removal of the works and have respectfully withdrawn their works in solidarity with Ippolito and Oropeza.

The inclusion of the works by Ippolito and Oropeza in the art show and the reasons for its removal have become a flashpoint in the rising tensions surrounding artwork featuring Palestinian activists, symbols of Palestinian liberation, solidarity with Palestine and differing definitions of Zionism.

Recent vandalism of murals, weekly protests in front of a new business and more recent art highlighting Palestinian resistance and culture are indicative of national issues that have stirred tensions visibly present in the Mission District.

In Clarion Alley, anonymous vandals have repeatedly defaced five murals depicting solidarity with Palestine. Since September, the murals have been vandalized 15 times after continuous repairs—the most recent occurring in the first week of June, soon after repairs were made to a damaged mural on June 3.

While works may be regularly tagged and occasionally painted over by different artists without permission, the recurring vandalism on the same murals is unprecedented for Clarion Alley, says Christopher Statton, co-director of the Clarion Alley Mural Project (CAMP).

Clarion Alley, which connects Valencia and Mission streets, was founded by CAMP as a place for social justice, activism and community mural art. Over a hundred thousand tourists and local residents walk through annually since 1992.

“Clarion Alley represents so many cultures and languages,” said CAMP Co-Director Megan Wilson. “Some works are personal to people that live in the Mission, but also there’s universal stories that have international reach.”

Chris Gazaleh, a Palestinian-American artist, activist and educator from the Bay Area, has long painted murals in Clarion Alley and the Mission that center around Palestine, Arab culture and solidarity movements between communities.

His most recent piece, which portrayed Ahed Tamimi, an 18-year-old Palestinian activist known for slapping an Israeli soldier, had been defaced multiple times before being painted over without permission by a traveling artist. Some of the spray paint vandalizing his work included a pig nose being drawn on Tamimi’s face.

Two of the other murals vandalized were painted by the Arab Resource and Organizing Center (AROC), in collaboration with AROC’s youth group (AYO) and Art Forces for the “WIll to Live” mural and with visiting Indonesian artists for “Bangkit Palestina!”

Sharif Zakout, lead organizer for AROC, says the murals provide representation and promote inclusion for Palestinian and Arab communities in the Bay Area, even though others like the Jewish Community Relations Council (JCRC) and Anti-Defamation League (ADL) disagree.

The artists and directors of Clarion Alley also describe the repeating vandalism as a hate crime. Statton says the continual targeting of Palestinian works intends to silence Palestinian voices and awareness about their identity, resistance and deaths by Israeli military forces. Zakout, Wilson and Gazaleh all agreed at this description of the vandalism.

“They’re definitely hate crimes and attacks of our community, because we are actually speaking out and standing up for what we believe in and who we are as people,” Gazaleh says. “It shows me how important our voice is.”

While these tensions right off Valencia Street have drawn attention to ideological debates, people that have lived and worked in the Mission for decades describe a longstanding history of Palestinian support in the neighborhood.

“I definitely see a lot of support in the Mission [for Palestine],” says Salim Nasser, the manager of Old Jerusalem on Mission Street.

Another way this support is being shown is a few blocks over from Clarion Alley during weekly protests of new cafe and event space Manny’s, named for owner Manny Yekutiel. Since Dec. 5, the Black and Brown Social Club, Lucy Parsons project have led a weekly demonstration against the business and called for a community boycott of Manny’s.

These protestors often hold Palestinian flags or signs with photographs of children and chant, “Manny is a gentrifier and a Zionist,” defining Zionism as a racist ideology, directly linking it to the displacement of Palestinians.

“There’s a lot of minorities here,” Nasser says. “I mean, I feel like we all go through the same things, so people can relate and people like to help.”

In 2007, another Mission mural led to heightened tensions between artists and the JCRC—representing concerns within the Jewish community about a portrayal of Palestinian resistance and solidarity.

This mural was done by local organization, Homies Organizing the Mission to Empower Youth (HOMEY) in collaboration with over 200 community members and artists. Lead artist, Eric Norberg, describes the mural as centered around how borders, walls and barriers divide communities and the power of communities in solidarity.

The work on the mural was halted prior to completion after complaints were made to the San Francisco Arts Commision regarding a segment about Palestine, which Norberg says people claimed incited violence and represented the destruction of Israel.

After multiple meetings with the JCRC to listen and discuss the portion of the mural generating concern, there were alterations made to the design, which Norberg says didn’t change the main theme of the mural.

These alterations included removing a keffiyeh from covering most of woman’s face, and changing the Palestinian flag to one that now reads “OUR MISSION: Self-Determination for ALL!”

Norberg supports the slogan on the new flag, as it shows a culmination of people’s struggles and the history of the Mission District understanding global struggles.

“This is what the Mission’s strength is,” Norberg says. “Being in solidarity with other people’s rights for human dignity.”

More recent murals throughout the Mission have explored this further through visual depictions of solidarity with Palestine.

Ippolito, whose work was taken down at the JCC, finished a mural in Balmy Alley last October titled, “Women of the Resistance” which centers young Palestinian Ahed Tamimi holding a key, surrounded by women involved in international movements of resistance. Above Tamimi are two more generations of Palestinian women—Lara Kiswani, executive director of AROC and Leila Khaled.

Ippolito says the key represents both the “right of return” for Palestinian refugees, as well as connecting to broader themes of female empowerment and ownership against a capitalist society.

Ippolito criticizes progressives who exclude the issue of Palestine from discussions or statements about movements for change and resistance against oppressors.

In the north of the Mission, Gazaleh’s mural “Humanity is the Key” covers an apartment in Elgin Park with what he says are symbols of Palestinian resistance, culture and memory. Completed in June last year, Gazaleh hopes his work gives a voice for oppressed people to show their side of the struggle, whether Mission residents or those globally.

“I think that the only way we can have a better life and justice in this world,” says Gazaleh, “is by thinking about the rest of the world.”

US media, politicians continue to ignore the ongoing tragedy in Gaza