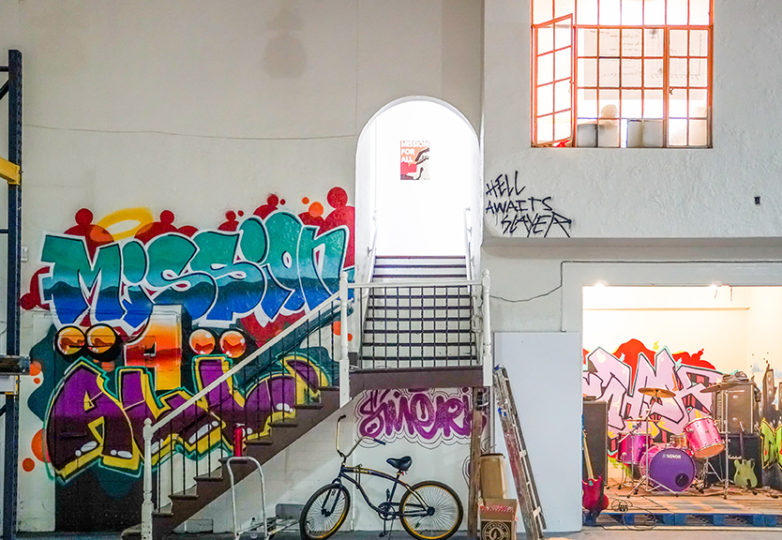 Mission for All’s headquarters, the location where the Made in the Bay art show was held on March 3. Mission for All is a public relations company created by Maximus Real Estate partners, the development firm behind the proposed “Monster in the Mission” project. Photo: Drago Rentería 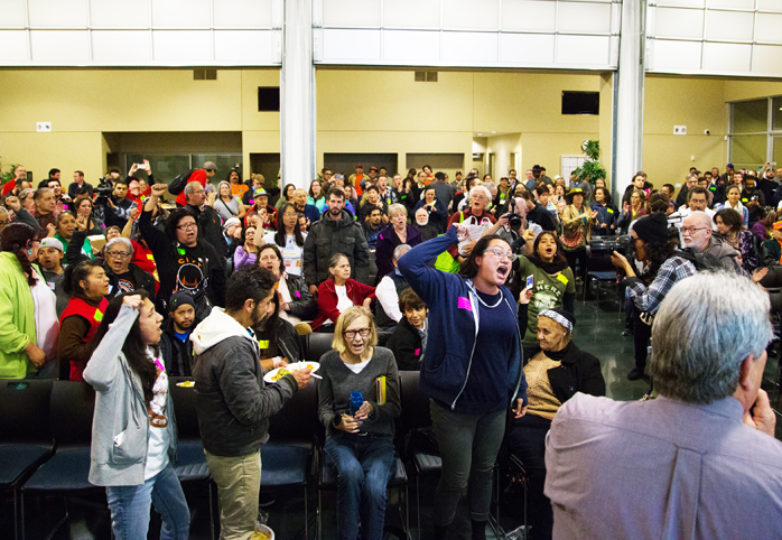 More than 300 community members and activists attended the March 4, 2015 public meeting at Laborers local 261 Union Hall to denounce the development at 1979 Mission Street, also known by opponents as the “Monster in the Mission.” Shortly after this presentation took place, Maximus Real Estate Partners created Mission for All, a public relations firm. Photo: Elisa Parrino/El Tecolote archives

A street art show involving local clothing companies, vendors, musicians and graffiti artists became the subject of controversy after it was revealed the event was being backed by Maximus Real Estate Partners, the firm behind the infamous “Monster in the Mission” project at 16th and Mission streets.

The Plaza 16 Coalition and other affordable housing advocates and community members alege that the event, dubbed “Made in the Bay” was little more than a blatant public relations campaign designed to build support for the Monster in the Mission, which is officially known as 1979 Mission.

Organized by employees of a Maximus-funded LLC called Mission for All, the event took place on March 3 at Mission for All’s headquarters, which is also the proposed site for the project.

Made in the Bay was heavily promoted through various social media accounts of artists and clothing companies, and various graffiti artists were invited prior to the event to paint murals on the walls next to the Walgreens at 16th and Mission streets.

Nancy Pili Hernandez, who has coordinated numerous invitational graffiti battles and art festivals in the Mission, said that she heard of the Made in the Bay event and became alarmed when she saw that the event flyer featured a Mission for All logo.

It isn’t the first time that Mission for All has been at the center of controversy.

In early January, Mission Local reported that a teacher and librarian was duped into having her photo featured as part of Mission for All’s $46,000 “I Am Not A Monster” ad campaign at the 16th and Mission Street BART Station.

Upon learning of Mission for All’s involvement, Pili Hernandez began doing outreach of her own.

“I began to text and call a bunch of the artists on the list to ask if they understood that participating in this event is cosigning on a condo,” Pili Hernandez told El Tecolote before the March 3 event. “And the majority of them had no idea who Mission for All is. They had all been approached by a clothing company called Dying Breed.”

Dying Breed, when asked to comment, stated that they were merely vendors at the event and  “not part of that organization.”

“We have a partner who is employed by Mission for All but that is an entirely separate entity,” their statement read.

El Tecolote contacted the partner who confirmed, on condition of anonymity, that he curated the show, but denied it had any connection to Maximus.

According to Business Entities records from the California Secretary of State, Mission For All, LLC was registered on Nov. 16, 2016 by Christopher Skinnell, a lawyer with Nielsen Merksamer based in San Rafael. On the registration form, Skinnell listed Mission For All’s initial business address as One Maritime Plaza Suite 1900, the same address for Maximus Real Estate Partners.

The Business Entities records show that Mission for All on Oct. 25, 2017 listed one of it’s managers as Larry Del Carlo, who is the former executive director at Mission Housing Development Corporation, the largest affordable housing nonprofit in the city.

Mission for All consultant Gene Royale said that Del Carlo asked him to attend a presentation on the 1979 Mission project, which he was working on, at the Laborers Local 261 Union Hall on March 4, 2015. Royale went, and witnessed angry community members shout down the project.

Royale and Del Carlo met shortly afterward with Maximus’ senior vice president, Bert Polacci, and offered to “put together an organization,” which they named Mission for All.

“We have a different point of view about how to work in community development issues in the neighborhood,” Royale said, explaining that his job at Mission for All is to train organizers, and “to turn around people’s thinking in the community about this project. I just think there is a deal here to be had. And that I wish my friends, and a lot of our friends, could see it.”

But there are many in the community who are wary of any deal that relies on trusting that Maximus has anything other than profits on its mind.

“Art and culture is such a big part of our community and we gravitate so much toward it, and we’re seeing that developers are capitalizing on that,” said Marilyn Duran, a community organizer with PODER who is also a member of Plaza 16. “This is just another tactic of a developer—a really big developer—who … is gonna gentrify and gonna displace our community, using the tactic of art and culture to persuade us to agree with the project.”

The ‘Monster in the Mission’ has been defeated, for now at least