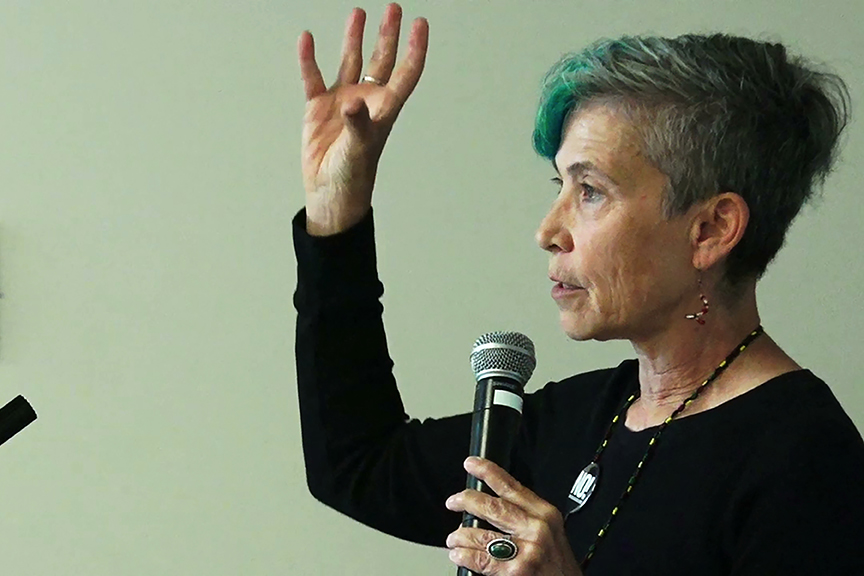 “This is a state of emergency,” Reiko Redmonde said during a panel discussion at the University of San Francisco (USF) on May 7 called “Is This Fascism?”

The panel was hosted by the Gray Panthers of San Francisco, to analyze historical fascist regimes, discuss political uproar in the face of oppressive governments, and compare and contrast white supremacist dictators to the Trump administration.

“No one is too young, too busy, or too old to take responsibility to drive out the Trump/Pence regime,” Redmonde  said. “It is a fascist regime, and for the future of humanity and the planet, we the people must drive this regime out.”

One of five panelists, Redmonde is an activist with Refuse Fascism and manager of Revolution Books in Berkeley. According to her, the current administration is working to intensify the oppressive nature of American society, “with assaults on immigrants, Muslims, women, black people, Mexicans, LGBTQ people, science, and the environment.”

She explained the difference, in her understanding, between a “bourgeois democracy” where government has a constitution and a rule of law (even if it is not applied equally to everyone) and fascism, in which the government shoves aside constitutional norms and attacks the press, “clamping down on critical thinking and attacking the very concept of truth itself.”

Panelist James Dahlgren, a toxicologist and internist (physician in training) for the Unitarian-Universalist Church San Jose, said that one common way for a fascist government to establish a dominant population is to target members of the society and make them feel inferior.

Dahlgren brought up scapegoating, that it was how Hitler convinced Germans to blame Jews for their troubles, and that now President Trump is targeting Muslims, refugees and immigrants in a similar fashion.

Trump’s designs to “make America great again” are an effort to create a form of American exceptionalism and nationalistic rule, according to Dahlgren, who pointed out that Hitler’s totalitarian government—born after the Reichstag fire—was supported by the corporate state in Germany.

Similarly, Dahlgren notes, the Trump administration is doing what the corporate state would like to see them do. This includes increased funding for the military, and gutting regulations by defunding government agencies like the Environmental Protection Agency.

Redmonde said that in a fascist government, “violence is whipped up and then unleashed against demonized groups” and the ability of people to resist is “obliterated with democratic rights essentially eliminated.”

Gerald Smith, a former Black Panther and organizer for the Oscar Grant Committee Against Police Brutality and the Labor Committee to Free Mumia, disagreed with other speakers in thinking that fascism has come to the United States.

Smith discussed Benito Mussolini’s fascist rule over Italy from 1922 to 1943. He said right before Mussolini came to power, it became pretty clear that the bourgeoisie couldn’t control society and the mass uprisings of labor organizations had to be stopped. In contrast, “the working class [today] is not even in motion, let alone rebellion,” Smith said.

Steve Martinot, an author and human rights activist, argued that it’s possible to say the United States has always been fascist, according to his definition of fascism as, “a society with an organized mode of administrative violence that is designed to suppress pro-democracy, progressive movements, and socialist movements.”

Martinot discussed how white supremacy was born in the Virginia colony in the 17th Century. From the evolution of a structure of slavery, “there emerged a white racialized identity as a cultural identity.” Martinot argued that as this identity developed throughout history, white people demanded allegiance from each other in the same way the Nazis did in the 1930s.

He explained that today, we see this white racialized identity materialize in the form of “a police department that shoots people down in the street by the thousands.” Martinot said the police use racial profiling to direct their focus, which was legitimized by the Supreme Court in Terry v. Ohio, a 1968 decision that allows law enforcement to search anyone they deem to be suspicious.

“Seventy percent of all the people in prison are there for victimless crimes,” Martinot said. “They are not violent people. That prison system itself becomes the hard material fact of what fascism in the U.S. is all about.”

Despite these challenges, Stephen Zunes, a professor of politics and international studies and global peace and conflict studies at USF, remains hopeful, especially in light of the resistance that has already emerged since the election.

Zunes cited in particular the Women’s March earlier this year, which brought 3.1 million people together throughout the United States to protest Trump.

“This was the largest single mobilization in U.S. history—topping the height of May Day marches in the early ‘30s, Moratorium Day in 1969 against the Vietnam War, and the protests against the Iraq War in San Francisco in 2003,” said Zunes.

Zunes also drew comparison to a number of oppressive leaders including Ferdinand Marcos in the Philippines, Suharto in Indonesia, and Louis Weichardt in South Africa. He pointed out that these countries were far less developed than the United States, had regimes that were far more oppressive, and lacked an alternative media to report the atrocities.

“Many of these regimes had the backing of the United States and other foreign governments,” said Zunes. Yet these movements were still able to mobilize and bring these governments down.”