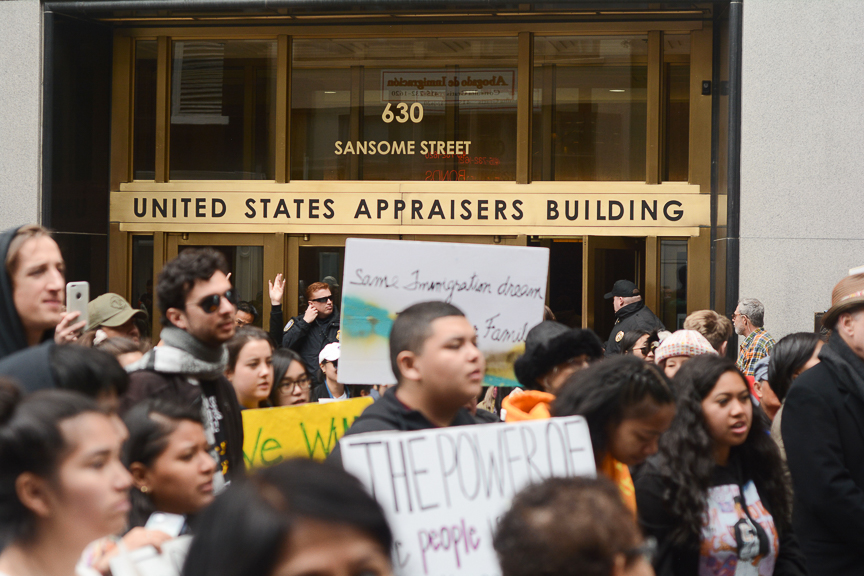 As immigrants, our greatest dream is the American Dream

In reaction to a string of Immigration and Customs Enforcement (ICE) arrests across Northern California, activists, community leaders and immigration attorneys held a demonstration outside ICE’s San Francisco field office on Feb. 28 to demand information about detainees who they say have been denied their rights for legal counsel.

After the Supreme Court ruled on Feb. 27 that detained immigrants do not have the right to periodic bond hearings, protestertors calling themselves “concerned community members,” barricaded entrances and street intersections to block ICE agents from their San Francisco headquarters.

Participating organizations such as Immigration Liberation Movement, Bay Resistance and Free-SF announced that they would not leave until they received information about the detainees, who were deliberately relocated by ICE because of the protest, according to Pangea Legal Services.

Pangea attorney Juan Camilo Mendez Guzman said that 25 attorneys contacted ICE the morning of the protest and still have not been given information about the locations of the detainees. The detainee’s families have also been kept in the dark.

“ICE claimed that they relocated these people because they worried the protest would compromise safety in general, but this is a lie,” said Guzman. “They have been relocating and processing them in Stockton since last Saturday, way before we announced the protest.”

“They are misleading and confusing families as a tactic to avoid giving information,” Guzman said.

Francisco Juarez, whose son Jesus Juarez was brutally detained last year on Nov. 9 while heading to work, shared his story.

“[Jesus] was chased by two cars and was almost hit by a car, and was detained with excessive force and once he was detained, he wasn’t read his rights,” said Francisco.

Francisco said that even after his son was detained, Jesus had to wait for some time in the back of the van to be processed, because ICE agents “went to get coffee at Starbucks.”

“One of his sons needs him right now,” Francisco Juarez said of Jesus. “He is very ill, his children always ask where their father is, and all I can do is lie to them and say ‘he is still working.’”

Lara Kiswani, a speaker and executive director of the grassroots organization, Arab Resource and Organizing Center (AROC), encouraged lawmakers to hold the status “sanctuary” to a higher standard.

“We call on all the decision makers in power to actually act on their promises, to make sure when you call something ‘sanctuary,’ you put it into practice,” Kiswani said. “It is not enough to say the police will not collaborate with ICE. It is not enough to say we are a sanctuary city. What we need to do is stop ICE from coming into our cities, stop ICE from taking our family members once and for all.”

Guzman said the term “sanctuary city” is tricky because it can mean a lot of different things.

“It can mean as little as being able to report a crime and not being taken to ICE as a result of it, which is the bare minimum and basic decency,” Guzman said. “Again, we say we have sanctuary status, but still maintain nine detention centers in the state of California.”

According to Guzman, the administration is “actively targeting places that value the immigrant community and because of this, [has] created a very hostile environment that has made people afraid to continue their daily lives.”

Gloria Esteva, a mother and community organizer, said there are many students she encounters who refuse to go to school because they’re afraid they won’t come back to their families.

“I don’t blame these kids wanting to stick close to their families,” said Esteva. “Especially to their mothers. As a mother who lost her son from a disease he caught in a detention center, after he was deported, I know that when your family’s safety is at risk, everything else does not matter.”

Yadira Sanchez, one of the facilitators of the protest, encourages everyone to stay informed of their rights and strongly advises advocates to make sure the information they are receiving is accurate before spreading it. Hysteria, she says, will only hurt immigrant communities.

Gomez thinks that people too often waive their rights because they are tricked into doing so. In order to prevent this, Gomez suggests not complying with ICE agents without legal counsel.

“If ICE comes to your door, sometimes they will pretend to have a warrant,” said Gomez. “But if they really did get one they would just knock down the door without permission, so it’s safer … [to not] open the door.”

“You don’t have to answer questions,” he added. “It’s very important that people especially don’t answer questions where they’re from or where they live, because a lot of times ICE agents will say that detainees voluntarily gave them that information and use that against you.”

Gomez, like Sanchez, believes that the most effective way to remain united is through awareness and communication. The Rapid Response Hotline (RRH) was created to help people get the the information and support their families need in these times of crisis.