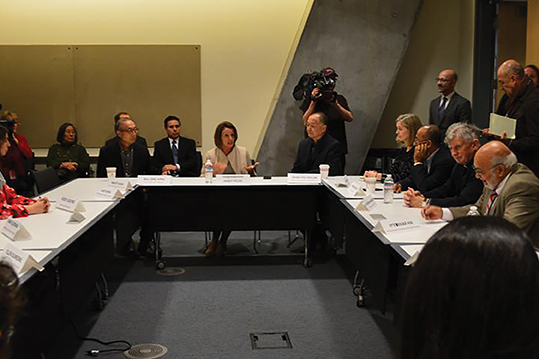 Immigrants and the power of adaptation

Since the release of President Trump’s immigration and refugee ban, California has seen ICE raiding communities and targeting innocent individuals.

Pelosi spoke to the events in Santa Cruz on Feb. 13, in which Homeland Security and local police officers arrested 10 individuals suspected to be involved in MS-13 gang-related crimes—an operation supposedly meant solely to target gang activity. It was later revealed that some individuals were taken to Homeland Security under the assumption they were undocumented immigrants, despite no proven involvement in criminal activity.

Santa Cruz Police Chief Kevin Vogel said ICE conducted the raid in secret and accused high-ranking members of Homeland Security of lying to his department about the raid including immigration enforcement.

“This flies in the face of the values that our community holds very deeply,” Vogel said at a press conference on Feb. 13. “The community has an absolute right to be angry over this.”

Pelosi noted that millions of undocumented people in our country are exposed to those types of distorting tactics, discussing how ICE has gone into communities questioning people at random.

Pelosi said she thought Homeland Security was targeting people who had broken the law in a serious way. “But instead they have used status as a violation of the law,” she said. “That’s not what prosecutorial discretion is about; that’s no discretion at all.”

Mike Pappas, executive director at the Interfaith Council, reported that a similar incident occurred in San Francisco’s Mission District. On Jan. 26, four ICE agents stopped by the Good Samaritan Family Resource Center looking for someone. Pappas noted that they came without warrants, and “traumatized the staff and children.”

“It is not the job of local police to support federal immigration enforcement,” said Kohli.

“[These lawsuits] have strong arguments for protection but I think that there is a threat,” said Dean Ito Taylor, executive director of API Legal Outreach.

Lariza Dugan Cuadra of the Central American Resource Center emphasized that regardless of President Trump’s orders, “We make sure that people know their rights because no matter what your status is you still have rights in this country and we’re working to create systems of protection locally.”

Pelosi remains hopeful for those who have been targeted unjustly, as she’s witnessed an outpouring of support for immigrant communities across the country from law firms offering pro bono assistance to vulnerable communities.

“People on our soil have rights, and they have rights to representation,” Pelosi said.

It remains to be seen if the Trump administration will attempt to repeal DACA, the executive order issued under the Obama administration that allows people who came to the United States as children to request work authorization and temporary legal stay for two years at a time.

Pelosi also addressed the issue of refugee children, and how they are “subject to the most stringent vetting in all of our immigration processes.” A supporter of the Refugee Resettlement Program, Pelosi noted, “of the three million refugees that have come into our country, none of them have done us any harm.”