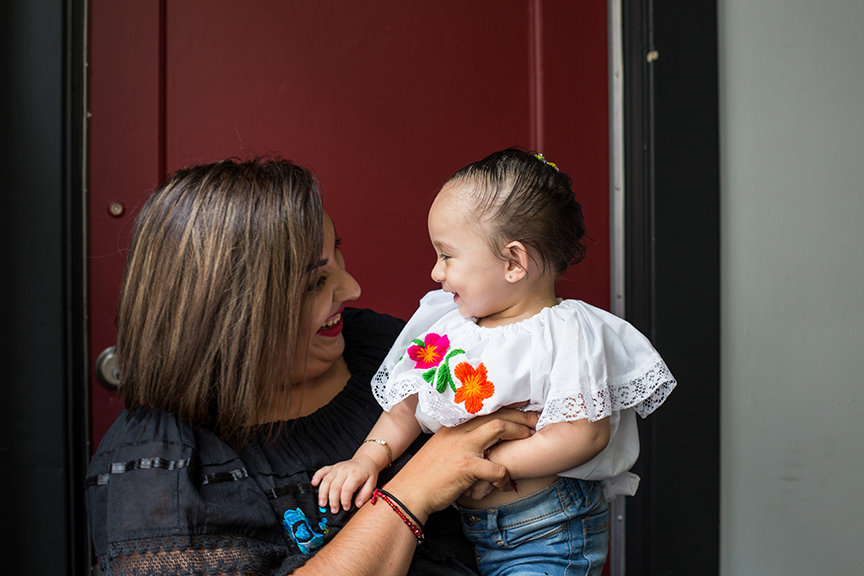 I met Stephanie Ortiz, a 24-year-old student and single mother, on the first day of the spring 2017 semester at San Francisco State University.

She was sitting near the front, close to the wall, when Professor Félix Kury asked her, “How’s the baby doing?”

“She’s doing good, thank you for asking,” she replied.

As a single mother, Stephanie faces the everyday challenges of raising her one-year-old daughter, Brooklyn. However, those challenges are amplified because she’s full-time student and working part-time at the Mission YMCA as a program leader. Stephanie is the definition of “chingona.”

Stephanie was barely a month old when her parents brought her to the United States from Mexico. After living here for nine years, she and her mother were advised to return to Mexico to prevent deportation. They were promised the citizenship process would only take 1,000 days, but it took a total of 8 and a half years instead.

Stephanie’s father was able to claim her and she was granted entrance into the United States.

Upon arrival, she had already graduated high school and turned 18. Stephanie’s mom had to wait a few of months to receive residency.

When Stephanie began thinking about returning to school, she was advised to apply for financial aid and attend City College of San Francisco (CCSF). But after one semester she had to leave because of her financial situation. She found work at Taquería Girasol at San Francisco State University and started saving money for school.

After a year, she returned to CCSF while continuing to work. She then graduated in 2016, but with “something unexpected.”

“I never expected to be a mom at this stage in my life.”

When it was time to tell her parents of her pregnancy, she feared that she had disappointed them. “They really expected something from me,” Stephanie said, her head down. “They had raised me to do better.”

After only being pregnant for three months, her baby’s father left her side, and remains absent to this day, offering nothing in financial support. Stephanie has had to find ways to budget to support Brooklyn. “Baby items are so expensive,” she said. “Diapers, wipes, clothes, food… it adds up.”

Stephanie has a hard time explaining what being a mom is like. It’s a struggle leaving her daughter with her mom every morning when she leaves for work or school. She said it’s the best feeling getting home to her daughter after the end of a rough day.

“I get home and I see her smiling,” she said. “She has these eyes and it makes me realize that everything that I’m doing is for her.”

Despite Brooklyn always being her priority, Stephanie constantly finds herself torn between work, school and her daughter. “Just like my parents didn’t give up on me, I’m not going to give up on Brooklyn,” she said, holding her daughter in her arms.

Prior to having her baby, Stephanie had plans to leave the Bay Area to go to college for clinical psychology and to study abroad. She is now majoring in  Latina/Latino Studies at SF State and plans to apply for the psychology program to double major. She hopes to start volunteering at Clínica Martín-Baró starting this fall.

“I love every bit of my life,” she said. “I love who I’ve become because thanks to my past experiences and the lessons learned, I am stronger.”

In a way, Stephanie reminds me of my mother: a woman who had an unexpected child at a young age but continues to do whatever they must do to follow their dream. “I tell myself to never give up no matter how hard it gets,” Stephanie said. “I constantly remind myself about my dreams and goals and at the end of the day, vale la pena.”